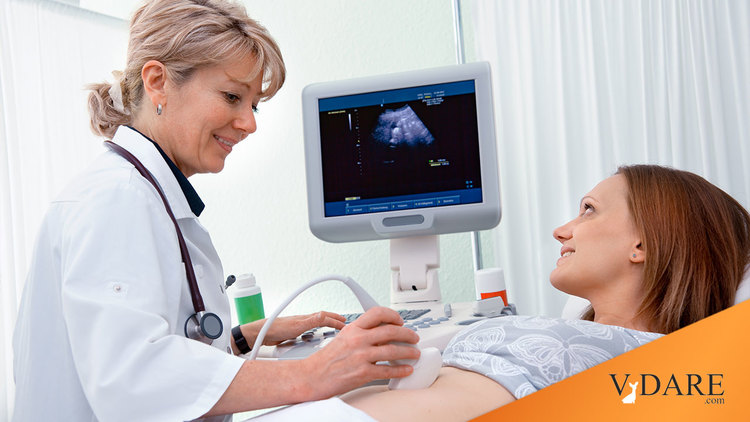 Ultrasound Images - The Most Incorrect Smiles In The World

All of Britain was buzzing last week after a tabloid published highly controversial photos—not of a topless supermodel or two female pop singers kissing or Prince William in a grass skirt, but of angelic babies smiling in the womb.

The ultrasound images, taken between 26 and 34 weeks of conception, were released by Dr. Stuart Campbell and widely circulated on the Internet via the Drudge Report. Campbell's an obstetrician at the privately-run Create Healthcare clinic in London. For the past two years, the medical facility has offered state-of-the art 3-D/4-D scanning equipment services to expectant parents. Campbell performs an average of 30 scans a week. His outspoken enthusiasm for this blessed technology is refreshing.  "Parents love them," he told the Mirror. "I hear so many couples laughing when they see the pictures - it's wonderful."

Campbell's high-tech window to the womb also shows the babies moving their limbs at 8 weeks, leaping and turning by 12 weeks, curling their toes and fingers at 15 weeks, and yawning at 20 weeks. The clients' reactions are overwhelming, Campbell said, "especially with fathers, who rarely get involved. Before they sat in the corner. Now they really show emotion. I enjoy scanning and looking at babies. It is so informative about babies and behavior. Every scan is an adventure."

How have pro-abortion activists abroad reacted after seeing the happy, grinning photos of these unborn babies?

Anne Karpf, a commentator for the British-based Guardian who bills herself as a "medical sociologist," says the photos are "deeply disquieting" and ridicules the anti-abortion lobby for being "intoxicated with evidence of a fetus's humanity." (God forbid this cold woman ever be exposed to a pregnant mommy experiencing the undiluted joy of a baby kicking inside her for the first time.) Australian Birth Control Services medical director Geoff Brodie complained that the photos "will be picked up by those groups that use anything and everything to stop terminations but ignore the fact that women have a right to choice."

Karpf, Brodie, and their deathmates are enraged that Dr. Campbell is so gleefully showing the world that the vibrant life inside a mother's womb is much more than inanimate and disembodied material.

How dare anyone suggest that the booming business of "terminations" is tantamount to mass murder?

Here in America, the pro-abortion lobby is having the same toxic reaction. It was bad enough when conventional, 2-D sonograms revealed unborn hearts beating and blurry hands waving, but the abortionists are absolutely aghast over rapidly spreading access to 3-D/4-D ultrasound technology.

When General Electric began running incredibly moving ads last year celebrating the company's new innovations in sonography, a writer for the liberal American Prospect complained the commercials were "a milieu of clever illusion" that "blur[red] the distinction between a fetus and a newborn infant."

This from the masters of deception who gave us the infamous euphemisms "fetal matter" and "uterine tissue," which have successfully blurred the distinction between human life and disposable Kleenex for more than three decades.

Similarly, pro-abortion advocates have attacked legislation in Congress, introduced by Fla. Republican Cliff Stearns, which would guarantee free ultrasound screenings to any woman who visits a non-profit crisis pregnancy center that receives subsidies for sonogram equipment. Kathryn Allen, Planned Parenthood spokeswoman, griped: "With all the problems going on in our world, I can't imagine that Congress would spend its time and energy on ultrasound for anyone."

Alison Herwitt, director of government relations for NARAL Pro-Choice America in Washington, also attacked pro-life supporters of the bill: "They don't want women to go to Planned Parenthood, where they'll get their full range of options," said Alison Herwitt, "They just want them to go to crisis pregnancy centers, where women will be exposed to this weapon at taxpayers' expense."

Liberals in America are all for the government giving away any health services for free—except if it's a service that has the ability to persuade a wavering patient to preserve a life instead of end it.

These amazing advances in golden-hued ultrasound have illuminated an insurmountable truth: No amount of NARAL money or NOW screeching can overcome the persuasive power of an unborn child's beaming face.