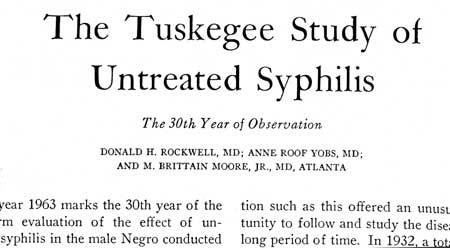 The Truth About Tuskegee

The Tuskegee syphilis study ranks almost with slavery and lynching as a symbol of America's racist past. There is probably not one black American adult who does not know—or thinks he knows—about an experiment from the 1930s in which government health authorities deliberately withheld treatment from 400 black syphilitics just to see what would happen to them.

In some versions of story, the government deliberately infected the men. At the very least, the authorities are said to have been guilty of withholding the effective treatments that became available in the 1950s.

Blacks often cite fear of "another Tuskegee" to explain why few of them cooperate with public health programs or donate organs for transplant. They never know when white doctors might experiment on them.

Anthropologist Richard Shweder of the University of Chicago has just published a detailed analysis of the Tuskegee study in which he shows that virtually every popular assumption about it is false. (Tuskegee re-examined,  January 8, 2004)

The study was undertaken by "progressives" who wanted to fight a disease that afflicted many blacks, it had the full support of black medical authorities to the end, and—most important—it probably caused no harm to the 140 men (not 400) who took part.

The U.S. Public Health Service started the study in 1932 in Macon County, Alabama, where syphilis rates for blacks ranged between 20 and 36 percent.

At the time, there were a number of treatments for the disease but they were complicated, disagreeable, and not very effective. They involved a year-long series of carefully-monitored intravenous injections of an arsenic compound that had such unpleasant side-effects that fully 85 percent of patients dropped out before treatment was complete. Of the 15 percent who stuck it out, few were cured.

Public health officials knew they needed better drugs. But they also needed a baseline to which they could compare the results of treatment. This was why they wanted to know what happens if there was no treatment.

As Prof. Shweder explains, syphilis is not always the raging killer most of us think it is. First of all, it is only in the early stages of the disease, when sores appear on the body, that it is contagious. This was the only stage at which arsenic had any effect at all. After that, syphilis goes into a latent state, in which there are no symptoms, and the patient is not infectious. Untreated syphilis can then go on the tertiary stage and destroy vital organs like the heart and brain—this is what happened to famous victims like Nietzsche—but for perhaps 80 percent of syphilitics, the disease stays latent, as if they never had it. The longer the disease is latent, the longer it is likely to stay that way. It is, in Professor Shweder's terms, "self-limiting or self-correcting."

Today, most public information campaigns don't emphasize this. Health authorities trumpet the potential for devastation rather than tell people they have a good chance of escaping unscathed. The Illinois Department of Health is the exception in explaining that:

"If untreated, syphilis then lapses into a latent stage during which the disease is no longer contagious and no symptoms are present. Many people who are not treated will suffer no further consequences of the disease."

It was this latent stage that health authorities wanted to investigate in 1932. Consequently, when they examined 410 syphilitic blacks for possible inclusion in the study, they found many were in the early, infectious stage, and rejected them as candidates. They turned over no fewer than 178 for the standard arsenic treatment, and kept 140 for the study. They then checked up on these men at rather lengthy intervals—in 1938, 1948, 1952, and 1963—giving them full physical examinations, and treating them for any disease other than syphilis.

A black nurse named Eunice Rivers ran the program, keeping in close contact with the men to make sure they did not drift out of touch. She was apparently a remarkable woman who created something of a social club around the study.

The outset of the program was therefore entirely unobjectionable. The men had already entered the latency stage of syphilis, for which the standard and largely ineffective cure of the day was no good at all. Foregoing that was no hardship, and in exchange they got free medical checkups and the benefits of Nurse Rivers' kind attention. The authorities at Booker T. Washington's Tuskegee Institute blessed the study.

By the mid-1950s, however, penicillin became available as a standard cure for syphilis. Should not the Public Health Service have stopped the study and treated the men? Wasn't it "racist" not to?

No. By the 1950s, the men had been infected for 20 or 25 years. Some number had died of heart disease probably brought on by tertiary syphilis, but for those who were still alive in the 1950s, the disease had very likely run its course. Ninety men were still part of the program at the time of the last examination in 1963. Penicillin treatment, even when it first became available, would probably have done them no good. Prof. Shweder suggests that by then these men may well have had life expectancies as high as black men of the same age who had never had syphilis at all!

It is possible, of course, to criticize the study on he grounds that its subjects did not give "informed consent." No one explained the rationale of the study to them, other than to say they had "bad blood" (the euphemism for syphilis at the time), and that their occasional medical examinations had something to do with it. However, as Professor Shweder points out, the concept of "informed consent" did not exist in 1932. It was common for doctors to tell their patients very little, whether they were black or white. Shweder goes on to argue that since there was little harm to the men and some benefit, the Public Health Service would probably have had no shortage of subjects even if it had explained every detail at every stage.

Of course, the study finally was stopped in 1972, hardly helped by press coverage like that of the New York Times, which titled its July 26 story of that year, "Syphilis Victims in U.S. Study Went Untreated for 40 Years."

Not even the redoubtable Eunice Rivers was able to fight off the terrible cloud that descended on the program. It has gained a permanent place in the lore of American "racism."

The "Tuskegee Study of Untreated Syphilis in the Negro Male," as it was officially called, is probably beyond redemption. The standard version of white perfidy probably cannot be displaced any more than the truth about America's World War II relocation camps can displace the common conviction that they were "concentration camps" in which Japanese were forcibly interned.

Nor is this process of falsifying history in ways that discredit whites over. It is now common "knowledge" that DNA evidence has proven Thomas Jefferson fathered illegitimate children with Sally Hemings, even though it has done no such thing.

So many whites so badly want to hear the worst about themselves they can hardly let the truth spoil a good yarn about "racism."

Jared Taylor (email him) is editor of

American Renaissance and the author of Paved With Good Intentions: The Failure of Race Relations in Contemporary America. (For Peter Brimelow's review, click here.) You can follow him on Parler and Gab.