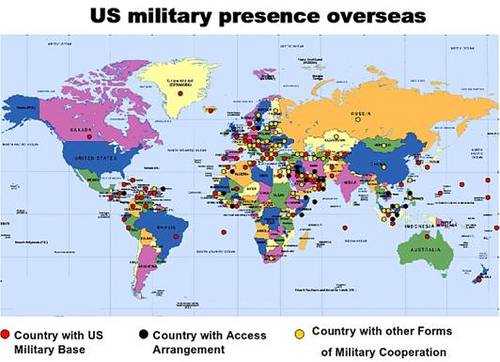 Toward the end of the presidency of George H.W. Bush, America stood alone at the top of the world—the sole superpower.

After five weeks of "shock and awe" and 100 hours of combat, Saddam's army had fled Kuwait back up the road to Basra and Bagdad.

Our Cold War adversary was breaking apart into 15 countries. The Berlin Wall had fallen. Germany was reunited. The captive nations of Central and Eastern Europe were breaking free.

Bush I had mended fences with Beijing after the 1989 massacre in Tiananmen Square. Mikhail Gorbachev and Boris Yeltsin were friends.

The president declared the coming of a "new world order." And neocons were chattering about a new "unipolar world" and the "benevolent global hegemony" of the United States.

Consider now the world our next president will inherit.

North Korea, now a nuclear power ruled by a 30-something megalomaniac, is fitting ballistic missiles with nuclear warheads.

China has emerged as the great power in Asia, entered claims to all seas around her, and is building naval and air forces to bring an end to a U.S. dominance of the western Pacific dating to 1945.

The great work of Nixon and Reagan—to split China from Russia in the "Heartland" of Halford Mackinder's "World Island," then to make partners of both—has been undone. China and Russia are closer to each other and more antagonistic toward us than at any time since the Cold War.

Terrorists from al-Qaida and its offspring and the Islamic Front run wild in Libya, Syria, Iraq, Yemen, Nigeria and Somalia. Egypt is ruled by a dictatorship that came to power in a military coup.

Japan is moving to rearm to meet the menace of North Korea and China, while NAT0 is but a shadow of its former self. Only four of 28 member nations now invest 2 percent of their GDP in defense.

With the exception of the Soviet Union, some geostrategists contend, no nation, not defeated in war, has ever suffered so rapid a decline in relative power as the United States.

What are the causes of American decline?

Toward Russia, which had lost an empire and seen its territory cut by a third and its population cut in half, we exhibited imperial contempt, shoving NATO right up into Moscow's face and engineering "color-coded" revolutions in nations that had been part of the Soviet Union and its near-abroad.

Blowback came in the form of an ex-KGB chief who rose to power promising to restore the national greatness of Mother Russia, protect Russians wherever they were, and stand up to the arrogant Americans.

Our folly with China was in deluding ourselves into believing that by throwing open U.S. markets to goods made in China, we would create a partner in prosperity. What we got, after $4 billion in trade deficits with Beijing, was a gutted U.S. manufacturing base and a nationalistic rival eager to pay back the West for past humiliations.

China wants this to be the Chinese Century, not the Second American Century. Is that too difficult to understand?

But it was in the Middle East that the most costly blunders were committed. Believing liberal democracy to be the wave of the future, that all peoples, given the chance, would embrace it, we invaded Iraq, occupied Afghanistan and overthrew the dictator of Libya.

So doing, we unleashed the demons of Islamic fanaticism, tribalism, and a Sunni-Shiite sectarian war now raging from North Africa to the Near East.

Yet though America's relative economic and military power today is not what it was in 1992, our commitments are greater.

We are now obligated to defend Eastern Europe and the Baltic republics against a resurgent Russia, South Korea against the North, Japan and the Philippines against a surging China. We bomb jihadists daily in Iraq and Syria, support a Saudi air war in Yemen, and sustain Kabul with 10,000 U.S. troops in its war with the Taliban. Our special forces are all over the Middle East and Africa.

And if the neocons get back into power in 2017, U.S. arms will start flowing to Kiev, that war will explode, and the Tomahawks and B-2s will be on the way to Iran.

Since 1992, the U.S. has been swamped with Third World immigrants, here legally and illegally, many of whom have moved onto welfare rolls. Our national debt has grown larger than our GDP. And we have run $11 trillion in trade deficits since Bush I went home to Kennebunkport.

Thousands of U.S. soldiers have died, tens of thousands have been wounded, trillions of dollars have been expended in these interventions and wars.

Our present commitments are unsustainable. Retrenchment is an imperative.

Post
Should Major League Baseball Sequester All 30 Teams in Phoenix?

Post
Where Have All the Heart Attacks Gone?
MORE...
POPULAR TAGS