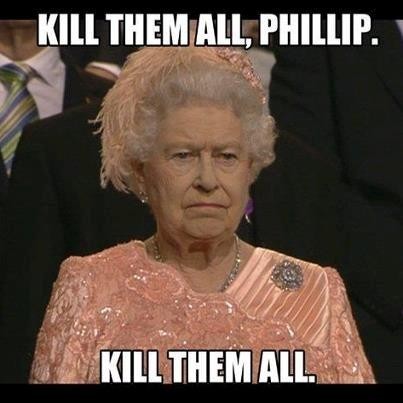 I am glad that, compelled by my wife and daughter, I made the effort to watch the opening ceremony of the London Olympics. This grotesque and sinister pantomime was a most interesting summary of what England has become.

The general purpose of the opening was to legitimize the current ruling class. English history was portrayed as a shameful nightmare. We had Victorian capitalists polluting the countryside and oppressing the working class. We had sexism and racism and war.

From this, we were shown the gradual emergence of our caring, sharing, soft and loving new order of things. There was a long celebration of the National Health Service, with eight hundred dancing doctors and nurses, and dancing invalid children. There were joyous messages read out by the Great and Good. There was more dancing and music and comedy.

At the culmination of all this, we saw a corner of the Olympic Flag carried by Doreen Lawrence—the mother of a black youth whose alleged murder in 1993 was made the opportunity to sweep away outmoded institutions like equality before the law and the protection against double jeopardy.

Long before the Olympic Flame was lit, the world was supposed to believe that England was a country blessed with genius in every calling and essentially at peace with itself.

The Olympic opening cost £27 million ($42 million). Did it deliver value for money?

In one sense, it couldn’t fail. Propaganda from the outside has two main functions. One is to persuade directly. Another is to alter the framework of assumptions within which ordinary people form their opinions. Ruling class propaganda has the additional function of reminding everyone who is in charge. For this, the technical quality of the propaganda hardly matters.

The message I took from the Olympic Opening was this:

“We are in charge. We have unlimited power and unlimited money, and we are willing to use these however may be needed to stay in charge. You may despise us. You may hate us. You may sometimes dream of having us led, a dozen at a time, to the gallows. But look at what we can do, and bear in mind there is nothing you can do to stop us.”

However, even if an inevitable success in depressing opposition, the Opening Ceremony could not hide the truth about our new and happy life.

Had the amplification once failed in the stadium, the spectators would have looked up from this Potemkin love feast to hear the omnipresent clatter of surveillance helicopters, and the maniac wailing of police cars. On their way to and from the stadium, they cannot have failed to notice the twenty thousand armed soldiers taken away from our incomprehensible and unwinnable wars, or the special lanes for the ruling class and its clients to make light of the traffic gridlock allowed for everyone else, or the ruthless harvesting of custom by the relevant business interests.

Nor did the ceremony show Britain’s official culture as other than trashy or at best mediocre.

When Hitler laid on his show in 1936, he had Richard Strauss and Carl Orff and Leni Riefenstahl. He had smart uniforms. Never mind what he was saying, he was himself quite entertaining to watch.

I ignored the Moscow and Peking Olympics, but suspect their openings had a rather stodgy dignity.

What did we have last Friday? We had boring and unmelodic rock groups with silly names. We had massed dancers cavorting about like excited children. We had Simon Rattle, a second rate interpreter of the German classics. We had Rowan Atkinson, a tiresome and elderly buffoon with just two comic turns to his name—one of them sneering at English history, the other sneering at the English character. We had Paul McCartney: whatever his talents may have been fifty years ago, he has plainly outlived his vocal cords.

Oh, and we had someone called “Tim” Berners Lee, who is famous in England—though nowhere else, I am informed—as the inventor of the World Wide Web.

As time passes, I think the most memorable image from this Olympic opening will be the look on the Queen’s face when exposed to a performance of the National Anthem with a simultaneous translation into sign language.

Since she is responsible for the state of affairs in which this whole atrocity could take place, I will not pity her for being kept out of bed to watch it. But the look of horror we were allowed to see before the cameras were switched to something else must have spoken for millions.

If this Potemkin Village is the best show our ruling class can put on for £27 million, England may not be so very far from deliverance.

Dr. Sean Gabb [Email him] is a writer, academic, broadcaster and Director of the Libertarian Alliance in England. His monographCultural Revolution, Culture War: How Conservatives Lost England, and How to Get It Back is downloadable for free here; hard copies can be purchased here, along with his recent novel The Churchill Memorandum and other works. For his account of theProperty and Freedom Society's 2008 conference in Bodrum, Turkey, click here. For his address to the 2009 PFS conference, "What is the Ruling Class?", click here; for videos of the other presentations, click here.