According to the liberal pro-diversity establishment, the true Islam is a “religion of peace” which has been hijacked by a small minority of extremists to commit numerous acts of terrorist violence. Elites further cling to the belief that Muslims residing in the West have assimilated to modern values.

Maybe not so much, if a recent poll in Europe is to be believed. A survey in several countries that contacted Muslims about their beliefs revealed that opinions thought to be extreme and rare were actually common. Those ideas include hostility toward gay persons and Jews, plus the belief that the West is out to destroy Islam (while at the same time many Muslims work to institute the worldwide rule of sharia law): 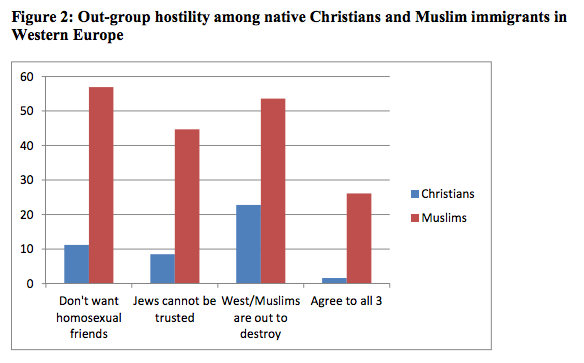 The survey results were published in WZB Mitteilungen, December 2013: “Fundamentalism and out-group hostility. Comparing Muslims and Christians in Europe”.

Even the diversity-prone Washington Post took notice, though the scribbler bashed Geert Wilders and other Europeans who have accurately warned of jihadist danger admitted via foolish immigration policies.

One narrative about Muslim immigrants in Europe is that only a relatively small proportion holds views that are sometimes labeled as “fundamentalist.” Ruud Koopmans from the Wissenschaftszentrum in Berlin argues that this perspective is incorrect. He conducted a telephone survey of 9,000 respondents in the Netherlands, Germany, Belgium, France, Austria, and Sweden and interviewed both Turkish and Moroccan immigrants as well as a comparison group of Christians.

His first finding is that majorities of Muslim immigrants believe that there is only one interpretation of the Koran possible to which every Muslim should stick (75 percent), and that religious rules are more important than the laws of the country in which they live (65 percent). Moreover, these views are as widespread among younger Muslims as among older generations.

He then looks at hostility toward out-groups. Fifty-eight percent do not want homosexual friends, 45 percent think that Jews cannot be trusted, and 54 percent believe that the West is out to destroy Muslim culture. Among Christians, 23 percent believe that Muslims are out to destroy Western culture. Koopmans says these results hold when you control for the varying socio-economic characteristics of these groups (although the analyses are not presented).

Religious fundamentalism is the strongest correlate of out-group hostility both among Muslims and Christians. Fundamentalism here is taken to mean beliefs that believers should return to unchangeable rules from the past, that the Bible/Koran should be taken literally, and that religious rules are more important than secular laws. Although Muslims are more likely to be fundamentalist and hostile toward out-groups than Christians, there are many more Christians in these countries. So, the overall numbers of Christians who feel hostile toward Muslims still vastly outnumber the Muslims who believe the West is out to destroy Muslim culture. This accounts for the success of extremist parties in many of the countries in which the survey was conducted. It may be that Muslim perceptions are partially a response to this but we can’t tell. (The study, as far as I can tell, has little to say about the sources of these attitudes).

This study is bound to attract ample media attention (it already has) and will be seen as a verification for political parties with extreme views, such as Geert Wilders’s PVV in the Netherlands. This is not an issue per se, facts are facts, however uncomfortable they may be, and from what I can tell, this is a professional survey (technical reporthere) done by a reputable academic scholar. Indeed, the survey was conducted in 2008, and the researchers appear to have waited until now to publicize these findings. Nevertheless, I wished that the publication of a sensitive survey like this would be partnered with a bit more information. For example, I could not even track down country-specific marginals for the main survey questions and key analyses in the article come without tables or graphs.

Still, the finding that 54 percent of Muslims in these six Western European countries believe that the West is out to destroy Muslim culture can hardly be ignored. A Dutch newspaper, Trouw, cites Arabist Jan Jaap de Ruiter who argues that Muslims have a tendency to give “socially desirable” answers to survey questions. Even if this is true, I’d still be very concerned that the apparent socially desirable answer is that Jews should not be trusted and that the West is out to get Muslims. An added concern is the absence of generational differences in the survey responses; suggesting that this is not an issue that is likely to go away any time soon.