Of course, diverse (mostly Muslim) car-b-cues don’t occur only on New Years. That would be too limiting to Allah’s anarchists. When Muslims get a tiny bit miffed in France, they think arson and other violence. For example in 2010, after a Muslim casino robber was shot by police in their self-defense, three nights of violence followed including 50 to 60 cars burned in Grenoble. An arresting police officer reported, “The youths told me: You killed one of ours. At any rate, you are a dirty race, we will kill you too. We will shoot at everything that is European.”

Below, a few of the dozens of cars torched in Grenoble France during the 2010 rioting. 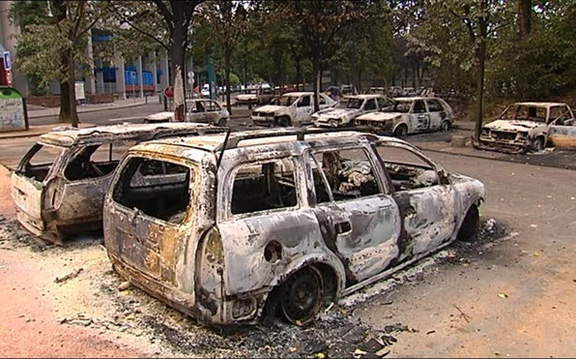 But a few dozen fried cars are nothing in the big picture of diverse arson. The blog Covenantzone examined records of France’s car burnings by using reports of the newspaper Le Figaro. Every year from 2005 to 2009 racked up more than 40,000 vehicles burned, with a total of over 200,000 automobiles destroyed in that time.

Below, a car flamed in Neuhof France on New Years Eve. 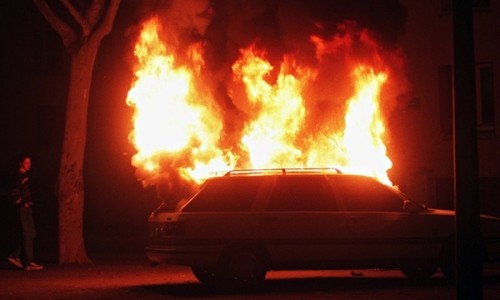 The AP report following didn’t directly identify the perps as Muslims, but did hint as much with its inclusion of the Allah Akbars shouted by the arsonists:

The French government has reported a 12% drop in the number of cars torched on New Year’s Eve – a ritual among revellers in the high-rise suburbs.

The number of vehicles set alight on the night of 31 December fell from 1,067 a year ago to 940, the interior ministry said on Thursday.

The ministry credited the “substantial, active and dissuasive mobilisation of the security forces” with keeping the seasonal crime wave in check.

The Socialist government increased security in the holiday period after three violent street attacks in the run-up to Christmas, in which one person was killed and more than 20 injured.

In two of the attacks, the assailants shouted the Islamic phrase “Allahu Akbar” (God is greatest).

More than 90,000 police, gendarmes, soldiers and emergency service workers were deployed to protect the public on 31 December.

The government has reported on the number of cars set alight each New Year’s Eve in recent years, although reporting the figures was abandoned in 2010-2011 over fears that it was sparking copycat fires.