The "Jobs for Jihad Delinquents" Program 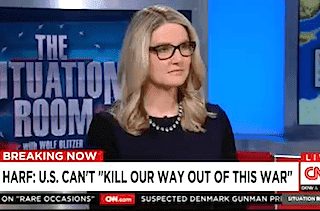 At the White House Summit on Extremism That Shall Remain Unspecified Because Violent Followers Belonging To Unnamed Extremist Movement Might Take Extreme Offense And Act Extremely, the feds are touting a groundbreaking new strategy to fight terrorists.

Instead of killing jihadists, keeping them off of our soil, locking up their poisonous spiritual agitators and shutting off their terror-funding pipelines, President Obama called on America and the world to "invest" in unnamed immigrant "communities" vulnerable to unnamed extremism. Some of the most generous welfare states on the planet have suffered horrific jihad attacks this year. Liberal Denmark's soft-on-jihad rehab program has been a disaster. But that hasn't stopped State Department spokes-babbler Marie Harf from mewling incessantly about "combating poverty" to combat ISIS.

Vice President Joe Biden opened the convention of jihad-coddlers on Tuesday by emphasizing the need for "respect" (cha-ching) and "a sense of community." White House senior aides spoke generically about terrorists of "all shapes and sizes," as they studiously avoided the precise nature and identity of the perpetrators of evil that precipitated the meeting.

The solution, the Obama administration wants 60 nations to D.C. to learn, is a super-sized community organizing campaign. It's Jobs for Jihad Delinquents!

No, this is not a "Saturday Night Live" anniversary skit.

Politically correct public officials from L.A., Boston and Minnesota are holding seminars on their "outreach" efforts to disaffected yoots as shining counterterrorism models. In Minneapolis, where al-Shabaab recruiters have metastasized, the U.S. attorney has bought into Muslim grievance-mongers' complaints that "immigrant youngsters remain marginalized, without access to adequate education, employment and other opportunities."

What a bloody crock. States like Minnesota and Maine have bent over backward to resettle thousands upon thousands of Somali refugees—putting their demands for halal food freebies, taxpayer-funded footbaths and "cultural sensitivity" over the safety and well-being of native-born citizens and taxpayers struggling to make ends meet.

While grandmothers and disabled soldiers and breast-feeding moms must submit to invasive TSA screening, Muslim leaders in Minneapolis have the feds groveling in apology over increased scrutiny of some Somalis. I mean, it's not like dozens of young male members of their "community" are flying off to the Horn of Africa and the Middle East to take up arms for jihad after benefiting from America's blind generosity. Oh, wait. They are.

The persistent leftwing myth of the poor, oppressed jihadist is absolute madness. How many times do we have to remind the clueless kumbaya crowd that al-Qaida mastermind Ayman al-Zawahiri had a medical degree, as did Hamas bigwig Abdel al-Rantisi and the seven upper-crust doctors who helped plan the 2007 London/Glasgow bombings?

The "root cause" of their evildoing is not a lack of employment, education, community centers, iftar dinners at the White House or publicly funded "opportunities." When will these fools in high office learn that you can't bribe these adherents of Stone Age ideology to behave? They don't want jobs. They want blood. Revenge. Islamist dominance. Ruthless extermination of Jews, gays, Coptic Christians, Christian aid workers, cartoonists, journalists, apostates and infidels of all shapes and sizes.

The M****m j*******s are not victims of Islamophobic intolerance and Western callousness. We are the victims of our own leaders' bleeding-heart overindulgence and reckless refusal to deal with reality.