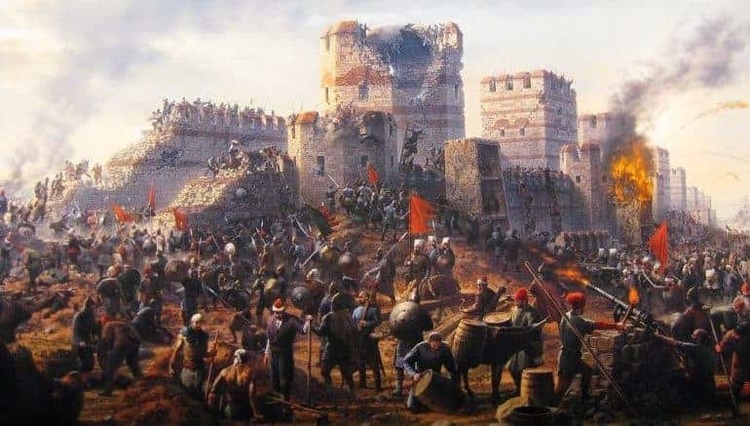 Benedict XVI—On God And The Prophet

To bank the firestorm ignited by his address in Regensburg, Germany, Pope Benedict XVI declared himself "deeply sorry" for the effect his remarks have had on the Muslim world. The words of the Byzantine emperor he quoted, Benedict explained, were "from a Medieval text which do not in any way express my personal thoughts."

The pope's subject was the "profound harmony" of Biblical truth and Greek thought. No conflict exists, he argued, between true faith and right reason. Contending violence is the antithesis of reason, he cited the "erudite Byzantine Emperor Manuel II Paleologus," during a siege of Constantinople, between A.D. 1394 and 1402.

"I would like to discuss one point—itself rather marginal to the dialogue as a whole—which ... can serve as the starting point for my reflections on this issue.

"In the seventh conversation ... the emperor touches on the theme of the holy war. The emperor must have known that surah 2, 256 (of the Quran) reads, 'There is no compulsion in religion.'

"According to the experts, this is one of the suras of the early period, when Muhammad was still powerless and under threat. But naturally the emperor also knew the instructions developed later and recorded in the Quran concerning holy war. ...

"(The emperor) addresses his interlocutor with a startling brusqueness on the central question about the relationship between religion and violence ... saying, 'Show me just what Muhammad brought that was new, and there you will find things only evil and inhuman, such as his command to spread by the sword the faith he preached." [Papal Address at University of Regensburg "Three Stages in the Program of De-Hellenization"]

The explosion followed. For it was reported that Pope Benedict had endorsed the view that the only innovations the Prophet made to the monotheistic faiths were "evil and inhuman." The pope did not say this, and has denied that he believes this.

Yet the issues he raised, that true faith and right reason are never in conflict, that force is intolerable in advancing God's word, merit discussion in light of history, and the present.

How did the Christians conquer the Roman Empire, after 300 years of persecution? By living the Gospel, preaching the Word and dying for the faith—martyrdom. But Islam came out of the desert to conquer the Holy Land, North Africa and Spain in a single century, by the sword. Islam is a fighting faith. Wrote J.M. Roberts in The History of Europe, "Islam from the start has been a religion of conquest."

In 1095, Urban II preached the First Crusade to end the abuse of Christian pilgrims and recapture the Holy City and Holy Sepulcher. Moslems view these Crusades as Christian wars of aggression. Yet the martial means the Crusaders used to recapture Jerusalem were the same as those the Caliph Umar had used to conquer the Holy City.

Until our time, Western man did not apologize for the Crusades. Gen. Eisenhower even titled his war memoir Crusade in Europe.

For centuries, European Christians fought the Islamic world. In 1492, Muslims were forcibly expelled from Spain by Ferdinand and Isabella. In the early 16th century, Suleiman the Magnificent invaded the Balkans, defeated the Hungarians at Mohács and besieged Vienna. The Balkan wars of Suleiman bear little resemblance to the Christian crusades of Dr. Billy Graham. In 1571, the fleets of the Ottoman Turks were destroyed at Lepanto by a fleet organized by Pius V.

In the 19th century, the Ottoman Turks began their long retreat from the Balkans. At the end of the First World War, Kemal Ataturk abolished the caliphate, put the caliph on the Orient Express, severed the ties between mosque and state, and made Turkey a secular state.

In Afghanistan this year, a Christian convert was threatened with beheading for apostasy. Most imams and Afghans seemed to approve. In Indonesia, Nigeria and Sudan, Muslims are at war with Christians, in the Middle East with Israelis, in Chechnya with Russians, in India with Hindus, in Thailand with Buddhists. Other issues are involved, but faith seems ever present as a prime motivator of violence.

In the West, men and women convert to Islam and imams preach and proselytize. In Islamic nations, conversion to Christianity can mean death, as can preaching and proselytizing. Do Muslim faithful believe it is legitimate to use state power to impose sharia or maintain religious orthodoxy, as Henry VIII and Isabella believed?

In the West, a militant secularism has seized state power and the de-Christianization of America is well advanced. In the East, we had best recognize that the rage, militancy and intolerance so often on display are the unmistakable marks of a rising, not a dying, faith.