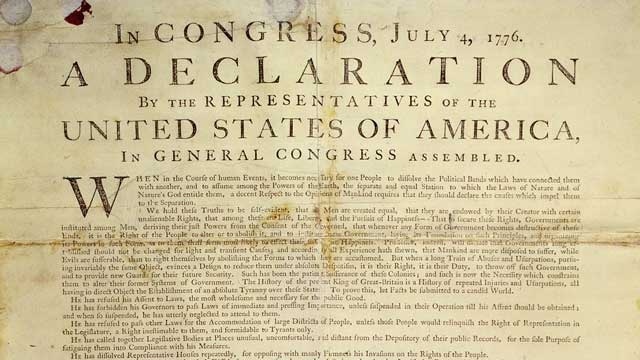 Declaration Of Independence Day For Kids

This past week, my son and constitutional attorney, Tim Baldwin, wrote the following and then delivered it to his elementary age Bible class at our church. It tells the story of our brave forebears' struggle for freedom and independence in a way that even children can comprehend. Oh! By the way, the class stood up and clapped after Tim delivered this address. I offer Tim's lesson to my reading audience with the prospect that many of you may want to read this story to your children or grandchildren this weekend, as we celebrate our nation's independence.

A long time ago, or not so long ago, depending on how you look at it, men, women and children set sail across the Atlantic Ocean in the 1600s to establish their own communities and to raise their families in a country that was inhabited only by Indian tribes and wild animals. By the thousands, they risked their lives by traveling across a vast ocean of rough seas, stormy nights and nauseating waves so they could build their homes in a place called America. Many of them died on their way here, and even more of them died after having reached the shores of the Atlantic coast. Still, with all of the elements of nature against them, including disease, harsh winters and some of the Indians who were very hostile towards them, they were able to build homes, churches and a form of government so that they could live a life pleasing to themselves, their families and their God.

During the 1600s and 1700s, more and more people came from mostly the European countries. There were people who came to America under the authority of the king of Great Britain to establish a colony. A colony is a territory of land that is founded by a people on behalf of their government, even though the government was not anywhere close to that territory of land. Eventually, thirteen colonies were established in America, all of them in the Eastern territories of America. The most northern colony was New Hampshire and the most southern colony was Georgia. When each colony was founded, the people of those colonies formed constitutions so that the people of each colony could enjoy a free society and a free government.

These people had to work extremely hard to make a good life for themselves. It has been described by people who first settled these areas that the trees were so vast and many that a squirrel could travel from New Hampshire to Georgia through trees and never have to touch the ground. Think of the amount of work it took to clear out the land, build their homes and make their food. To live in America was no easy task. It took determination, and no one here could be lazy. You would die if you were.

As the years passed, the people in America became very self-sufficient, relying upon their own hard work and labor to meet their needs. They thanked God for the way He provided for them and all of them celebrated Thanksgiving Day just as their forefathers, the Pilgrims, did, because they knew that God had blessed them with a great country, with great people and great land to live on. With the ability to take care of themselves, to provide for their families, to run their own businesses and to have their own government, there was a spirit of liberty and freedom in those colonies.

However, over time, it became apparent to everyone, including the King of Great Britain and the Parliament of Great Britain, that the resources of America were too valuable not to benefit from. So, Great Britain began passing and executing laws that took advantage of the labor, agriculture and industry of the American colonists. Even though Great Britain had very little to do with the American way of life, their business and the people there, they enjoyed taxing the colonists so that they could get money from them and spend that money for the benefit of Great Britain.

The American colonists at first did not mind the laws that Great Britain passed to tax and regulate them. They saw Great Britain as their mother country and they gave loyalty to the king and parliament. They saw their authority as complying with the British Constitution, which had existed there throughout hundreds of years of their history. Great Britain had a king to execute the laws, which would be similar to a President; it had a Parliament to create laws, which would be similar to our Congress; and it had judges, to apply the laws to individual cases, just as our courts do today. The American colonists were very proud to be loyal to Great Britain, because it was considered to be the greatest country in the world, with the greatest form of government.

But that feeling did not last forever. What began happening was Great Britain started using the American colonies and colonists as a way to obtain more money and wealth for themselves. Finally, they passed a law called the Stamp Act in 1765. This Stamp Act was designed to tax the internal commercial activities of the colonies. Before the Stamp Act, Great Britain taxed only the external commerce of the colonies, that is, where the colonies shipped goods from America to other countries. But now, the Stamp Act taxed goods and products that were made in America and sold in America. This was the first time that Great Britain had tried to interfere with the internal affairs of the American colonies.

To some in America, the Stamp Act was unacceptable, and they would not stand for it. The colonial governments, which had been handling the affairs of their own colonies, began sending to Great Britain their letters of dissatisfaction, requesting that the king repeal this law. These colonists cried out, "No taxation without representation!" See, the American colonies were not involved in the way government operated and what laws passed in Great Britain, because that was across the ocean and they had no representatives in parliament to make sure their interests and their will was expressed and made part of the decision making process. The resistance became so heavy that the king and parliament decided to repeal the Stamp Act. The colonists celebrated as they found out. They had parties, music and gatherings all over to express their joy for what they had accomplished.

However, their celebration was soon to end. See, Great Britain repealed the Stamp Act, but they still declared that they could regulate and tax the colonies at any time they wanted, even though the colonists did not have any representatives in Great Britain. Thus, it is no wonder that the conflict between Great Britain and the colonies would soon arise again, and indeed it did arise again.

Not too long after Great Britain repealed the Stamp Act, Great Britain passed another law that taxed the America colonies, just as they did before. Great Britain declared to the colonies that their laws were the supreme law of the land and that they were constitutional. To resist these laws was treason and worthy of extreme punishment. The colonists had mixed feelings about what was going on before them. Some thought that Great Britain had the constitutional right to regulate them because the constitution allowed them to do so. Others did not care one way or the other. However, there were others in America who believed that their natural rights from God allowed them to govern themselves based upon their own consent and not upon the will of some ruler who did not have their interests in mind. These people were called Patriots.

In 1775, the intensity was becoming more and more heavy. Each colony was trying to figure out what to do. Some suggested that they send more letters to Great Britain, expressing their loyalty to the king and to the constitution, just hoping that the king and parliament would listen to their complaints and would grant them relief. But others were not so hopeful. One man in particular believed that action was required and that mere words were a waste of time. He believed that the time for taking up arms in defense of their liberty was required, and that the king should know that they were free people and would not stand to be trodden under the foot of the king. This man was Patrick Henry.

The story goes that Patrick Henry delivered a speech that was so moving and so full of wisdom and inspiration that he convinced the colony of Virginia to do just what he said they should do: prepare for war! And that they did. Now keep in mind, the colonists did not start a war, but they were preparing for a war that Great Britain was launching against them. During this time, Great Britain had sent soldiers to the colonies to make sure that the colonists behaved and followed the laws passed by Great Britain. Patrick Henry knew that those soldiers were not there to play games but to enforce Great Britain's rule, and if necessary, kill those who refused.

A year of struggle between the colonists and Great Britain took place, but the one incident that cemented in the minds of the people that they must break away from their government was when Great Britain's soldiers tried to disarm the people by taking away their guns and ammunition. During that effort, some people died as the American colonists tried to defend what was rightfully theirs. In the colonists' minds, like Patrick Henry, there was no way that Great Britain and America could ever be reconciled with each other. America must be free from them, for as Patrick Henry said in his famous speech to take up arms in their defense, "Give me Liberty or give me death."

So, on July 4, 1776, after representatives were sent from each colony to meet at a convention in Philadelphia, Pennsylvania, each colony declared its independence from Great Britain and America was born as a nation to stand above all other nations. It was the place that God used to spread the gospel of Jesus Christ to the rest of the world. It was the place where men and women sacrificed their lives, fortunes and sacred honor, so that you and I could have a legacy of freedom.