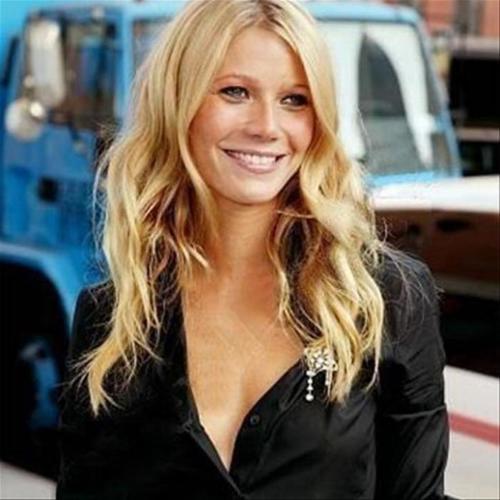 Gwynnie P is down with the struggle, comrades.

She may make $19 million a year, own mansions in London, New York, Brentwood, Malibu and the Hamptons, charge $550 for her Goop.com "travel backgammon set," and fly by private jet, but she feels your pain.

OK, it's not as painful as her last $5,200 Thermage session in Santa Monica, but still, she really, really does feel the agony of the ordinary.

Last week, the progressive princess celebrity joined the "SNAP challenge." It's basically the ice bucket challenge for bored Hollywood liberals and media-hungry Democratic politicians. For seven days (or at least for an hour or two after they publish their announcements to Twitter and Facebook), the bleeding hearts play "poor" by subsisting on a faux welfare budget.

Paltrow was invited to join the poverty voyeurism racket by her good friend Chef Mario Batali—last seen eating his way through Spain with G-Pally for a 13-part PBS TV series. What, you don't have a chef bestie to motor around in a Mercedes with across Galicia and Cordoba as you savor almejas, salmorejo and flamenquines?

When these self-indulgent stars are not binging on European delicacies, they're purging themselves of liberal guilt with phony gimmicks like the SNAP sanctimony. The idea, Batali explains, is to "walk in the shoes of" millions who rely on government assistance to supplement their household budgets.

Fortunately for Paltrow, this doesn't mean she has to give up her $1,200 pair of Tom Ford black platform heels or anything else in her well-appointed shoe closet. All she had to do was snap a Vogue-ready photo of her $29 haul of austerity grocery items (likely purchased by one of her many private kitchen assistants at an organic food market in West L.A.).

Pobrecita.Everyone on the planet except for rail-thin Paltrow seems to have understood the hilarity of Hollywood's most famous detox dieter—whose calorie intake rivals an earthworm's—pretending to have the sads over her SNAP menu: seven limes, a tomato, one head of garlic, a bunch of scallions, bags of brown rice, black beans and peas, a package of corn tortillas, one avocado, a yam, an ear of corn, a dozen eggs, and bunches of kale, lettuce and cilantro.

Pepper Potts' public relations stunt inspired global derision from the hoi polloi of all political persuasions. Lefties excoriated the privileged starlet for making a mockery of genuine anti-hunger efforts. Righties debunked her dubious statistics low-balling SNAP benefits for a family of four. And moms and dads across America helpfully offered cost-cutting grocery lists of their own.

"A 20-pound bag of rice, a few bags of various kinds of dried beans, supplemented with some chicken breast ($1.99/pound on sale at my local supermarket), and she's all set," one savvy shopper wrote.

But let me be clear (to borrow a well-worn phrase from Paltrow's favorite man crush, President Obama): Paltrow doesn't deserve contempt because she's clueless and wealthy. She deserves contempt because of her own deep-seated condescension and loathing of the lessers she purports to champion.

"I'd rather smoke crack than eat cheese from a tin," she infamously sneered. Presumably, she feels the same way about my childhood favorites: Cheez Whiz in a jar and Ritz Crackers 'n Cheese Dip in those little portable containers with the red plastic spreader.

"I'd rather die than let my kid eat Cup-a-Soup," she told Conan O'Brien. Yes, she's judging you and me and every other normal person who has ever purchased Ramen by the pound to save money.

When she's not flitting around the most affluent neighborhoods of America, she's overseas trashing her countrymen. Remember this: "I love the English way, which is not as capitalistic as it is in America. People don't talk about work and money; they talk about interesting things at dinner parties," she told the foreign press. And: "I don't tap into the bad side of American psychology, which is 'I'm not achieving enough, I'm not making enough, I'm not at the top of the pile."

Paltrow openly despises capitalism and those who unabashedly pursue it. Striving for upward economic mobility is gauche in the eyes of the left-wing 1 percent. It's so much more fashionable to show manufactured sympathy for the downtrodden than to encourage them to lift themselves up.

Only in the land of make-believe is it nobler to simulate being dependent and poor than to aspire to be successful and wealthy.