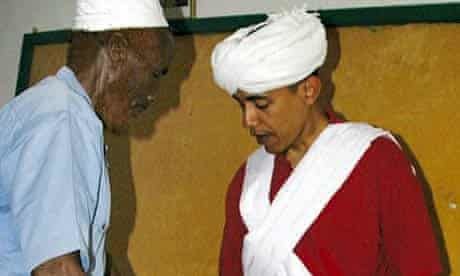 The Fulford File| Ask Obama, Not Trump, If He’s A Muslim—And If He’s Going To Pull A Tony Blair

The picture above doesn’t indicate that Obama is a Muslim: it just shows him playing dress-up in Kenya (where he has roots but WASN’T ACTUALLY BORN!!! Can I write for the Main Stream Media now!???) It was taken in 2006, after Obama had been a member of Jeremiah Wright’s black Christian church for 20 years and illustrated a story called Obama camp claims smear over turban photograph by Ewen MacAskill, published in Britain’s left-wing Guardian on February 26, 2008.

Yes, an actual photograph of Obama can be a “smear”—or “Hatefact” as we like to say here on VDARE.com. Weeks before that story appeared, I did a blog post saying Face It, Anything You Say About Obama Is A Gaffe.

Donald Trump is now being told that anything said to you about Obama is a gaffe. Someone said to him at a New Hampshire townhall that “You know our current president is [a Muslim]. You know he’s not even an American.” And Trump is being attacked—notably by other Republicans–for not jumping down the guy’s throat and asserting his faith in Obama’s natural-born citizenship and Christian faith .[Trump doesn’t challenge anti-Muslim questioner at event, By Theodore Schleifer, CNN, September 18, 2015]

That means it’s time to revisit my 2010 article Obama A Muslim? It Depends On What The Meaning Of The Word “Muslim” Is.

He is not a Muslim in that, as a politically ambitious Chicago “community activist,” he went through a number of black churches before joining the Reverend Jeremiah Wright’s black-nationalist Trinity United Church of Christ (TUCC). He attended for years, until his political ambitions became, once again, more important than his religion, and he broke all connection with Wright.

Still, Obama was sworn in as President on a Bible, not a Koran, and when he spoke at a memorial service for the victims of the Tucson shooting, he read from the Christian Bible.

That’s a relatively impressive display of Christianity for a Left-wing Democrat with an academic background. It might even be enough to get him put to death as an apostate in a Muslim country.

So why did Scott Walker, asked, as a typical MSM  gotcha question, if he believes Obama is a Christian, answer “I don’t know”? [Is President Obama a Christian? It depends what you mean by ‘Christian’, by Justin Taylor, February 23, 2015]

Because he’s not a bloody mind reader!

(a) internal assent (what Obama actually believes, inside his head) and

The “dogma” part is why Christian sects differ, between Catholic and Protestant, and between Presbyterian and Episcopal. Plenty of sects are willing to say of the others that they’re not really Christian. The fact that Obama actively supports gay marriage and abortion would put him beyond the pale for many traditional Christians.

The “internal assent” part was why, when John Boehner was asked by David Gregory on Meet The Press [February 13, 2011] if he thought Obama was a Christian, he replied: “The president says he’s a Christian. I accept him at his word.”

Gregory asked him again, like an Inquisitor at a heresy trial, and Boehner repeated himself:

GREGORY: But that kind of ignorance about whether he’s a Muslim doesn’t concern you?

SPEAKER BOEHNER: Listen, the American people have the right to think what they want to think. I can’t–it’s not my job to tell them.”

And of course, Obama is still culturally a Muslim, in the same sense that 19th century British Prime Minister Benjamin Disraeli was culturally Jewish. (Disraeli, almost universally known as England’s first Jewish Prime Minister, was a baptized and confirmed member of England’s Established Church, as a result of his father Isaac’s decision to convert.).

If I understand you shrill little twerps correctly, I’m supposed to point out to this guy in New Hampshire that the President is not a Muslim but a Christian. Well, his father and step-father were both Muslims, which means, as far as Islam is concerned, he was born a Muslim. Has he renounced it? ...Ted Cruz entered this world in Calgary, Alberta in 1970, which means that he was born a British subject and a citizen of Canada. I don’t suppose the Queen cares about that one way or the other – unlike your average Islamic scholar in Qom or Cairo. Yet you media types made such a big deal out of it that Ted was obliged to write to Ottawa to renounce even any theoretical Canadianness. Have you inquired of your buddy the President whether he’s done anything similarly clarifying?

After Obama stops being President, perhaps it will be safe to refer to him as America’s first Muslim President. It’s certainly not safe now. There are probably more stories like this one:

And after Obama leaves office, he may feel free to become—retroactively— America’s first Muslim President in fact. As Canadian journalist Colby Cosh tweeted in 2010:

Look, I don't think Obama's a Muslim either, guys, but *exactly* how much credibility do you want to stake on him not pulling a Tony Blair?

“Pulling a Tony Blair” means converting after he leaves office—Tony Blair, whose wife is a Roman Catholic, was a regular member of the Established Church (like Benjamin Disraeli) as long as he needed to be elected Prime Minister of the United Kingdom. When he left office, he converted to Catholicism. [Blair explains conversion to Catholicism . Guardian, August 28, 2009 ]

Here’s how the religious affairs correspondent of the Guardian headlined that story:

After 30 years as a closet Catholic, Blair finally puts faith before politics

But if Obama does convert, in the interests of becoming a billionaire by selling his influence and making speeches in Saudi Arabia, Qatar and Bahrain, the American MSM—the “Palace-Guard Creeps”—will probably tout it as evidence that he must have been a Christian all along, or he wouldn’t have had to convert!

Or maybe they’ll say he was driven to do it as a protest against the “Islamophobia” of President Trump…and Vice President Coulter.