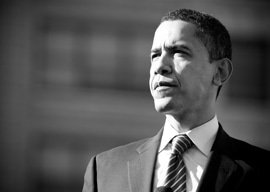 Q. Is Obama a Muslim? A. He Was Raised to be a Muslimist

The President of the United States has long claimed to be a believing Christian. For many years, he trumpeted his decades of theological tutelage under his spiritual adviser Rev. Jeremiah Wright. Rev. Wright has made clear that, although he was a Muslim for a while, he espouses “Black Liberation Theology.”

Before finding Rev. Wright, Obama was, according to his Dreams from My Father, a regular reader of the Nation of Islam newspaper The Final Call. But the failure of Rev. Farrakhan’s “POWER” attempt to launch a blacks-only brand of toothpaste and other toiletries convinced Obama there wasn’t enough money in black economic nationalism.

Back in 2012, I published a Taki’s Magazine column that finally made sense of Obama’s odd upbringing:

Making Sense of Obama: The Muslimist

… The first two-dozen years of Obama’s life saw him on a path for a professional niche that nobody has quite explicated before. Until he upped stakes and moved to Chicago in 1985 to participate in the Council Wars racial struggle with the implausible goal of becoming mayor of Chicago, Obama was gliding down an unusual path: to become an international interlocutor, a graceful go-between connecting America and the Muslim world. …

In American history, the two most controversial castes of missionary-derived mandarins were the Old China Hands and the Arabists.

The former were typically sons of Protestant missionaries born or raised in China, such as Owen Lattimore, John Paton Davies, Jr., and John S. Service. The left-leaning diplomatic, academic, and journalistic China Hands clashed with the right-leaning China Lobby in the 1940s and 1950s over whether American should back Mao Tse-tung or Chiang Kai-shek. Was Chiang a loser or was Mao a lunatic? (Unfortunately, it turned out that both could be true simultaneously.)

Similarly, as outlined in Robert D. Kaplan’s 1995 book The Arabists: The Romance of an American Elite, Protestant missionaries from the Atlantic Seaboard voyaged to the Arab world in the 19th century. They didn’t have much luck converting the locals to Protestantism. (Obama’s Columbia professor Edward Said was a rare Arab Protestant.) But these intermarried families founded influential schools such as the American University of Beirut.

The Arabists played an influential role in American foreign policy until largely being squeezed out by Zionists angered with the Arabists’ sympathy for the Palestinians.

Much of the Muslim world, however, is not Arab—for example, Indonesia, Pakistan, and large parts of black Africa. And that opened up a potential career path not as an Arabist per se, but as a “Muslimist.” The Muslimist route became especially promising in 1973 with the Muslim-dominated OPEC’s emergence as an economic power. The oil cartel included not only Saudi Arabia, the Emirates, Libya, and Iran, but also Indonesia and part-Muslim Nigeria.

And who was better suited by family, friends, and personality to become a professional Muslimist than Barack Obama? As Obama told his biographer David Maraniss, the “obvious path for me given my background” was to get a graduate degree in international relations and wind up “working in the State Department, in the Foreign Service, or working for an international foundation.…”

After all, how common is it for an American citizen to be the biological son of an East African government official and a Ford Foundation employee in Jakarta, and the stepson of an Indonesian who works in government relations for an American oil company because his brother-in-law was in charge of mineral rights for the Jakarta regime? …

Obama’s elders recognized that this career path made sense for him. Thus, at substantial expense, he attended Occidental, an underachieving but quite WASPy/international liberal-arts college, and then majored in international relations at Columbia.

Most of Obama’s male friends from age 18 through 24 were rich Pakistani Marxists, putting him on the fringes of the powerful Bhutto circle. …

But it’s also telling that his best American buddy, Phil Boerner, with whom he transferred from Occidental to Columbia in 1981, was the son of a peripatetic diplomat.

Likewise, Obama’s most serious New York girlfriend, Genevieve Cook, was the daughter of a top Australian diplomat/spy in Indonesia who later became Australia’s ambassador to America. Genevieve was also the stepdaughter of the chief counsel of the International Nickel Company, which had lucrative mining interests in Indonesia. (Continuing this Muslimist theme, she rebounded from Obama to marry the son of an Egyptian educator.) …

Obama’s dearth of creativity would not be a defect in, say, a Foreign Service lifer, where his job would have been to relay messages from the State Department to the host government and vice-versa. The “blank screen” aspect of Obama’s personality would have suited him well for a job as a relay.

Obama’s most obvious talent is that he is good at listening to people speak and then repeating it back accurately and elegantly, showing comprehension as well as rote memorization. This is a crucial skill for diplomats—the ability to grasp the implications of what the foreign official is saying and pass it back to Foggy Bottom.

But Obama didn’t like the messages coming from Washington in the 1980s, enormously successful as Reagan’s foreign policy turned out to be. Reagan’s landslide reelection in 1984 was followed by Obama’s bizarre turn to insular Chicago politics in 1985.