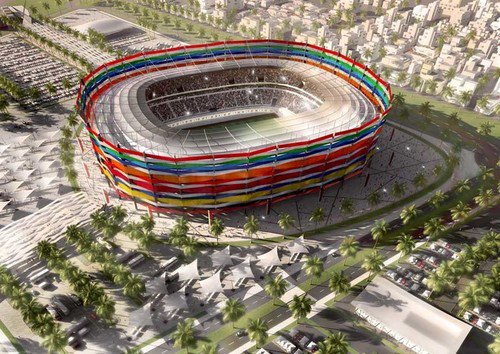 Qatar Hosts 42 Syrian Refugees, But Will Spend $200 Billion to Throw Party for Itself

Qatar is sponsoring 42 Syrian refugees as ‘guests of the Emir’

Why Qatar is Spending $200 Billion On Soccer

That $200 billion figure includes infrastructure like a new city, a new airport, a subway, lots of new hotels, and all new stadiums.

“Indeed, the numbers are amusing at first,” says Shaul Gabby, an international studies professor at the University of Denver, and a Qatar expert. “But the spending is deeper in its motivation and interest. The most important value in Arab culture and tradition is honor, which brings respect and the fear of possible adversaries. This is even more important in a time of turmoil and instability in the Middle East, where the basic legitimacy of old, traditional regimes are publicly and visibly shaking.”

The Arab world, says Gabbay, will enjoy a psychological lift if Qatar can successfully host the World Cup.

So Qatar is spending almost $5 billion to throw a party for itself per Syrian refugee admitted.

By the way, Qatar is one of the main funders of the bloodshed in Syria. From the Financial Times in 2013:

How Qatar seized control of the Syrian revolution

By Roula Khalaf and Abigail Fielding-Smith

As the Arab world’s bloodiest conflict grinds on, Qatar has emerged as a driving force: pouring in tens of millions of dollars to arm the rebels. Yet it also stands accused of dividing them – and of positioning itself for even greater influence in the post-Assad era. …

In the shell-blasted areas of rebel-held Syria, few appear to be aware of the vast sums that Qatar has contributed – estimated by rebel and diplomatic sources to be about $1bn, but put by people close to the Qatar government at as much as $3bn. …

To some extent, the fact that Qatar is so exposed reflects the reluctance of western governments to intervene in Syria. However, for Qatar, Syria is also the culmination of an opportunistic foreign policy which saw Doha become the unlikely backer of other Arab revolts in north Africa – and a friend of those who emerge as winners, in most cases Islamists.

Isn’t it about time to cancel the 2022 World Cup in Qatar?
[Comment at Unz.com.]