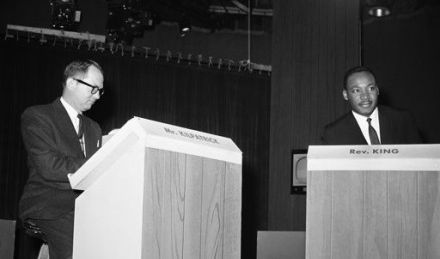 Histories (And Obituaries) Are Written By Victors: The Case Of James J. Kilpatrick

Above, Kilpatrick in a 1960 debate with Martin Luther King, Jr.

The focus of MainStream Media obituaries for James J. Kilpatrick, who died August 22 in his ninetieth year, was nothing new. They zeroed in on one thing: Kilpatrick's role in defending massive resistance to school desegregation in Virginia when he was editorials editor for the now defunct Richmond News-Leader.

This is typical of the way America's current political elite treats Southerners of a certain generation. For example, here is the New York Times' headline over its obituary of Dixiecrat Sen. Strom Thurmond: "Strom Thurmond, Foe of Integration, Dies at 100."

(An exception, of course, is made if the Southerner is an important Democrat—here is the NYT headline over the obituary on former Klansman Robert C. Byrd: "Robert C. Byrd, a Pillar of the Senate, Dies at 92."The same man, Adam Clymer, wrote both obituaries.)

The Richmond Times-Dispatch addressed the scandalous subject right up front in its first paragraph:

"James J. Kilpatrick, whose pugnacious advocacy of defiance to court-ordered desegregation of Virginia's public schools vaulted him from Richmond editorialist to nationally prominent conservative commentator, died Sunday in Washington. He was 89.

"His career with the evening newspaper spanned the tumultuous years after the 1954 decision by the U.S. Supreme Court that outlawed racially segregated schools—a decision against which Mr. Kilpatrick, acknowledged even by foes as a gifted wordsmith, thundered with pointed eloquence.

" 'These nine men repudiated the Constitution, spit upon the 10th Amendment and rewrote the fundamental law of this land to suit their own gauzy concepts of sociology,' Mr. Kilpatrick wrote after the court ruling.

"'If it be said now that the South is flouting the law, let it be said to the high court: you taught us how.'"

The chairman of the corporation that owns the Times-Dispatch threw in the obligatory denunciation of Kilpatrick's dark past:

"J. Stewart Bryan III, chairman of Media General Inc., which published the News Leader until it was folded into the Richmond Times-Dispatch in 1992, described Mr. Kilpatrick as a 'very persuasive writer and debater with strong opinions on many subjects.'

"Bryan, whose late father, D. Tennant Bryan, was publisher during Mr. Kilpatrick's tenure, added, 'During 17 years as editor of the editorial pages of The Richmond News Leader, he presented these opinions in forceful prose. Some of the positions he took, especially on racial issues, have proven to be wrongheaded. '"

"James J. Kilpatrick, 89, a fiery advocate of racial segregation as a Richmond newspaper editor in the 1950s who became a sparring partner of liberals on the television show '60 Minutes' and a syndicated columnist who offered conservative views on subjects ranging from politics to the proper use of English, died Aug. 15 at George Washington University Hospital. He had congestive heart failure.

"Mr. Kilpatrick, who gradually distanced himself from his writings on race, became one of the most popular and eminent conservative writers of his generation. …

"Larry J. Sabato, [Email him] a political science professor at the University of Virginia, said Mr. Kilpatrick's accomplishments will always be overshadowed by the major role he played as top editor of the Richmond News Leader.

"At the now-defunct paper, Mr. Kilpatrick wrote editorials that thundered support for 'massive resistance' to race-mixing in public schools, an effort pushed by the political machine of U.S. Sen. Harry F. Byrd Sr. that worked to shut down public schools rather than integrate them.

" 'It was one of the saddest episodes in Virginia's long history, and it helped to keep the state a backwater for years to come,' Sabato said."

In fact, of course, Virginia wasn't a "backwater" at all, but, thanks to the "Byrd Machine", an efficiently-run place that had yet to surrender its institutions, most importantly the universities, to left-wing eggheads like Sabato.

The New York Times, surprisingly, was most levelheaded in its opening. It waited until the fourth paragraph to discuss Kilpatrick's sin:

"In the mid-1950s, Mr. Kilpatrick became something of a national figure, articulating constitutional arguments justifying the policy of 'massive resistance' to the Supreme Court's decision outlawing school segregation. But as the South changed, so did Mr. Kilpatrick, who dropped his fervent defense of segregation a decade later."

The overall meme was one of sin and redemption, with Kilpatrick "repudiating" his outdated views about race and segregation.

Apparently, Kilpatrick did decide his side had lost and there was no point in defending it. Like William F. Buckley and Human Events, he kissed the conquerors' ring. But it's a question whether he really changed his views, considering what the NYT reported he wrote in Nation's Business in 1978:

"Conservatives believe that a civilized society demands orders and classes, that men are not inherently equal, that change and reform are not identical, that in a free society men are children of God and not wards of the state." [Emphasis added]

None of the newspapers, having excoriated Kilpatrick for the sin of defending segregation and his opposition to the Brown decision, mentioned its real history. There is a case to be made that government-imposed integration simply has not worked, least of all in the public schools.

And Kilpatrick's obituarists simply assumed he was using a Constitution as a fig leaf to cover his hatred of blacks.

But in fact Kilpatrick was exactly right when he thundered against the Brown decision on the News-Leader's editorial page. The Supreme Court had indeed, as he said, "repudiated the Constitution, spit upon the 10th Amendment and rewrote the fundamental law of this land to suit their own gauzy concepts of sociology."

The newspapers that dug up this entirely accurate description, including the New York Times, didn't divulge that the NYT itself published a story by James Reston the day after Brown was decided that confirmed Kilpatrick: A Sociological Decision: Court Founded Its Segregation Ruling on Hearts and Minds Rather Than Laws (May 18, 1954).

And we now know that Associate Justice Robert Jackson wrote in an internal court memo "I simply cannot find, in surveying all the usual sources of law, anything which warrants me in saying that [the Court's decision invalidating school segregation] is required by the original purpose and intent of the Fourteenth or Fifth Amendment". The Court, Jackson opined frankly, was "declaring new law for a new day".

Indeed, the Supreme Court didn't even make the decision, as Paul Craig Roberts has explained:

"One party to the decision, Department of Justice official Philip Elman, revealed in the February 1987 Harvard Law Review that the Brown decision was the product of an ex parte dialogue between a sitting judge (Frankfurter) and a litigant (Elman), which transgressed the fundamental ethical norms for judges. When Elman spilled the beans about the conspiracy, Brown's supporters, including the New York Times and the Dean of Harvard Law School, among others, condemned the impropriety used to orchestrate the outcome. …

"It took Frankfurter and Elman 18 months, from December 1952 to May 1954, aided by death and illness among the justices, to orchestrate the decision. The reason it took 18 months was that the entire Court and opposing counsel understood that Thurgood Marshall's brief, in the words of Justice Robert H. Jackson, 'starts and ends with sociology.' The Court opposed overturning legal precedent on the basis of nonlegal opinion, especially when such extraordinary action risked unleashing the ruthless use of federal judicial power."

But let that sleeping dog lie. The obituarists mostly buried deep down in their stories —and the New York Times did not mention at all—an interesting little fact: Kilpatrick took up the cause of a black man he believe wrongly sentenced to death for murder.

"One of his first actions was to champion the case of Silas Rogers, a young black shoeshine man who had been convicted of fatally shooting a Virginia police officer in 1943. Poring over the court transcripts, Mr. Kilpatrick found inconsistencies in testimony. He retraced the steps of the accused killer and tracked down witnesses the police had never contacted.

"His exhaustive reporting over two years led the governor to pardon Rogers. A black newspaper in Richmond inducted Mr. Kilpatrick into its honor roll for courage and justice in 1953."[See The Press: The Case of Silas Rogers, Time Magazine, January 5, 1953, and Va. Governor Frees Once-Doomed Convict, Jet Magazine, January 8, 1953, both of which credit Kilpatrick.]

That's very strange behavior for a "fiery segregationist", who wrote an essay entitled The Hell He Is Equal, scheduled to be published in the Saturday Evening Post in late 1963 until the infamous church bombing in Birmingham, Ala., that killed four black girls. (It was, the editor said, in "bad taste" and "inflammatory". In the article, Kilpatrick directly stated, with a freedom now vanished from American discourse, "The Negro race, as a race, is in fact an inferior race.")

But because a man believes that one race is more violent and less intelligent than another, and that therefore they should not mix, does not mean he believes the law must treat the race in question unjustly.

Back to Kilpatrick. Whatever he believed when he died, he was right in the 1950s in attacking court-mandated desegregation on Constitutional grounds.

Not least in the case of Arizona's SB 1070, America is now facing court-mandated immigration. This time, the battle against an imperial judiciary will be fought to a finish.