Gun-grabbing virtue-signaling dominated the Academy Awards ceremony [Stars to Wear Anti-Gun-Violence Pin at Oscars, Sources Say, by Ingrid Schmidt, Hollywood Reporter, March 1, 2017], typically hypocritical given that it was protected by an army of gun-toting cops [Oscars Security: LAPD Will Have Over 500 Officers On Hand at Red Carpet, by Gene Maddaus, Variety, March 2, 2018). In dramatic contrast, the long-delayed remake of the 1974 Charles Bronson classic Death Wish, finally released this weekend, is the finest pro-Second Amendment film ever made. I urge VDARE.com readers to see it—now, on the big screen.

On Saturday morning, sitting in a theater preparing to watch it, I couldn’t shake the memory of California’s Dianne Feinstein quite literally rubbing her hands together euphorically and shaking with glee at the thought of gun confiscations (brought up foolishly by President Trump, who appears to have a peculiar penchant—good and bad—for thinking aloud.)

In a country where 82 percent of gun owners are white [Gun Ownership Trends and Demographics, Pew Research,  March 12, 2013] the obvious result of an increasingly anti-white Democrat Party pushing gun control is simply the disarming whites— who, as President Obama said “cling to their guns, or religion or antipathy toward people who aren't like them or anti-immigrant sentiment or anti-trade sentiment as a way to explain their frustrations.”

I took a quick inventory of those in attendance at the movie: roughly half-full, 95 percent white. They would join me in watching Bruce Willis portray Paul Kersey, the character ultimately defining Bronson’s venerable acting career. (No relation!...well, maybe spiritually).

Back in August of 2017 when the first trailer for the Eli Roth-directed Death Wish remake hit, the film was instantly dubbed “Alt-Right” and attacked on social media for being “nakedly fascist” and “alt-right fan fiction” [Death Wish: is the Bruce Willis remake an alt-right fantasy?, by Graeme Virtue, The Guardian, August 8, 2017]

And by the time the credits rolled and the new Death Wish had ended, the image of Feinstein rubbing her hands together had vanished, replaced by the echoing memory of repeated cheers. Each time Willis’ Kersey dispatched a bad guy, the spontaneous joy from the audience grew louder.

Death Wish is, quite frankly, the best case for gun rights (and, SPOILER ALERT, for the importance of having an AR-15 strategically stored in a coffee table) ever made. 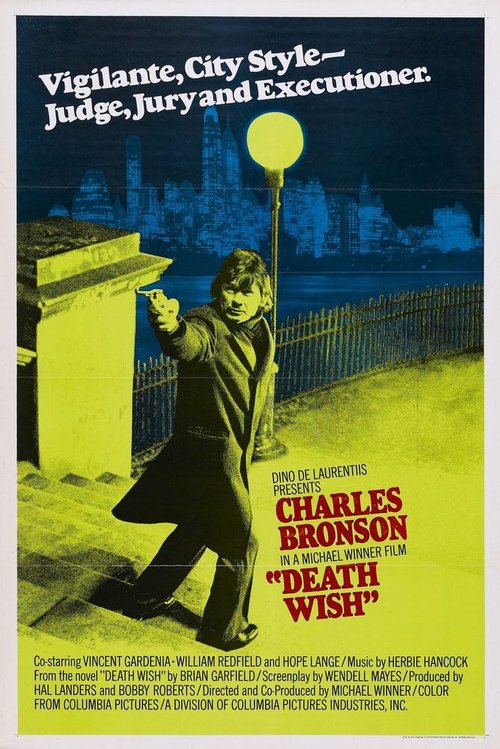 The Bronson version of Death Wish was made years before I was born, but I’ve read about the reaction: “The moviegoers… don’t just sit there in their seats calmly munching popcorn. They applaud and cheer wildly whenever Bronson… dispatches a mugger with his trusty .32 pistol”. [What Do They See in ‘Death Wish’?, by July Klemesrud, New York Times, September 1, 1974]

Witnessing a crowd of strangers in 2018 doing the same for the Bruce Willis remake gave me goosebumps.

It’s the kind of reaction that motivates Leftists like Diane Feinstein to rub their hands together with glee at the prospect that law-abiding citizens i.e. whites will be disarmed and left defenseless instead of being able to protect their family and property.

Indeed, one of the key scenes in the 2018 movie is comes after Kersey’s wife has been murdered (by a Hollywood go-to multiracial gang ludicrously comprised of Hispanics and whites), and he goes to Texas for her funeral. In the original, Bronson’s character is motivated to fight back by a rabid Arizona gun owner. Willis’ doctor version of Paul Kersey is motivated by seeing his father-in-law pulling out a lever action 30-30 and firing off multiple rounds at poachers, telling Kersey: “People rely on the police to keep them safe. That’s the problem. If a man really wants to protect what’s his, he has to do it for himself.”

Willis’ Kersey is shocked. He has believed his entire life that if he worked hard and provided for his family, he’d be rewarded with safety and a bourgeois existence free of the mayhem of inner-city life, the consequences of which he routinely encounters as one of Chicago’s top trauma surgeons.

Perhaps this is one of the primary reasons top movie reviewers—a lowly 8 percent fresh rating—have blasted and buried the movie, with all critics giving Death Wish an aggregated score of 15 (out of 100), while audiences have overwhelmingly enjoyed the movie giving it an 85 percent fresh rating. (The “fresh” system is from  film review site Rotten Tomatoes, which takes reviews from real people as well as the MSM.) [Political Bias on Guns: Gap between movie review and audience scores is huge for Bruce Willis’ “Death Wish”, CrimeResearch.org, March 3, 2018]Just as we are supposed to believe Black Panther is the best movie ever made, we are expected to agree Death Wish is the worst movie ever made.

Most unhinged reaction so far: an editorial at the black entertainment site Bossip:

I don’t care what Eli Roth or Bruce Willis say the movie is about, it’s about a time-honored American tradition of arming white men with weapons to kill black people. It’s a cinematic portrayal of the NRA’s blatant racism.

This isn’t even a censorship debate, either, because censorship is about silencing work that is offensive. Death Wish isn’t offensive. It’s deadly. It is less a movie as it is an advertisement for racist violence. Not only should Death Wish not be supported, but we should have a list of everyone involved in the flick—black and white—and vow to never support any of them again.

Racist white people clinging to their guns is exactly how the Main Stream Media has branded NRA members. But in fact the Bronson and Willis’ versions of Death Wish both work overtime to make their vigilantes’ actions racially neutral.

For the most part, Willis’ Kersey—just as Bronson’s version did in the original—is killing white criminals. The climactic scene of the 2018 Death Wish even showcases four white guys breaking into his home to kill both him and his daughter, only to be dispatched by Kersey’s new weapons legally procured from a gun shop outside Chicago (including an AR-15, whose heroic appearance generated the loudest ovation from the crowd).

In Paul Talbot’s 2006  Bronson's Loose!: The Making of the Death Wish Films, we learn the original plan for the Bronson version was that the muggers (played by three white actors: an Irish-American, a Greek-American, and, in his first-ever appearance on film—Jeff Goldblum) should be played by black actors. But already in the 1970s, Politically Correct casting decisions were made to insulate blacks from stereotypes confirmed by crime statistics:

In (Brian) Garfield's novel [Death Wish], the pivotal attack on the wife and daughter is not described, and there is no rape. Mayes's screenplay also had the assault taking place off-screen. But Winner shot a repulsive and vicious scene that showed both women being beaten and humiliated and the daughter being sexually assaulted. The director explains, "I thought that the audience had to be geared up to so hate the people that did this, that they wanted that type of person killed. I think you had to show [the attack] in order to get the audience sympathetic to Bronson going out and killing people."

The sequence is one of the most brutal ever shown in a mainstream film and was made even more shocking by the presence of the classy Lange as one of the victims. (One effective camera angle represents the wife's point of view as she sees her daughter being violated.)

Adding to the queasiness of the scene are the performances of the three scary-looking actors who played the attackers. "You're looking for a villain to be as horrible as possible so the audience really hates him, and then they don't mind of he or his mates are killed," Winner explains. The screenplay specifically called for several of the mugger characters to be black, but Paramount executive Frank Yablans, concerned that the film would be racist, urged the director to limit the number of African Americans that were cast as thugs. [Emphases added]

But it’s important to note that left-leaning critics of Willis’ version focus not so much on race as what one calls “pro-gun daydream”.  [Terribly timed ‘Death Wish’ and Bruce Willis do their best shooting for the NRA, USA Today, by Bryan Alexander, March 2, 2018] 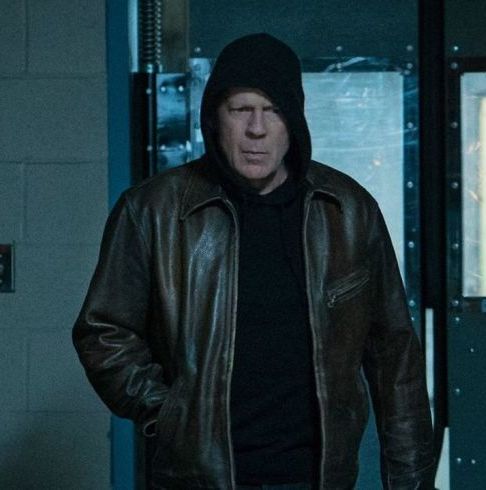 But the Daily Beast did accuse director Eli Roth of “cultural appropriation” for the unforgivable sin of having Willis’ Kersey wear a hoodie:

“[T]he filmmaker then has Kersey stalk the streets in a hoodie, thereby appropriating one of the symbols of the Black Lives Matter movement (courtesy of the Trayvon Martin case). Pushing buttons doesn’t get much crasser—or more inapt, given the current cultural climate.”

Moral of the story: white men can no longer wear hoodies, given our current cultural climate.

In all seriousness, Death Wish is an incredible movie, in many ways superior to the 1974 version. It isn’t an “Alt-Right” film, a term I consider in serious need of retirement, but a Dissident Right movie powerfully extolling the virtues of legal firearm ownership and the right of self-defense.

Back in 2015, when Trump was still running to be the Republican nominee, he let slip at a rally in suburban Nashville that he has a handgun carry permit in New York. He added that any attacker will be “shocked” if he tries to assault him, and that he would emulate Bronson:

“Can you imagine with Trump, somebody says, ‘Ohhh, all these big monsters aren’t around, he’s easy pickins, and then … pu-ching!” Trump said to laughter and applause. “So this is about self-defense, plain and simple.”

Trump reminisced about Bronson’s “Death Wish” and got people in the crowd to shout out the title of the 1974 film in unison. In the movie, an affluent, liberal architect embarks on a vigilante mission after his life is shattered by thugs who kill his wife and rape his daughter.

“Today you can’t make that movie because it’s not politically correct,” Trump said.

Trump was wrong: Eli Roth and Bruce Willis’ version is far more explicit in laying out the moral justification for vigilantism.

And, of course, Trump was even more wrong to flirt with gun confiscation as a way to stop shootings.

Personally, I believe his wonderful instincts will ultimately prevail.  But this slip of the tongue did give us Dianne Feinstein’s revolting reaction, a reminder why a film like Death Wish resonates with so many Americans: they sense instinctively that the Left doesn’t want us to have access to firearms for self-protection from criminals or for self-preservation from their policies—because they hate us, they really hate us.