A Thousand Africans Storm Spain’s Melilla Border, Half Get In

It doesn’t seem like Spain is trying very hard to keep the swarming Africans from climbing over its dinky Melilla fences and thereby gain entrance to Europe. Electrification or a moat would make breaking through harder — something should be done because the fence is not impressive at all. 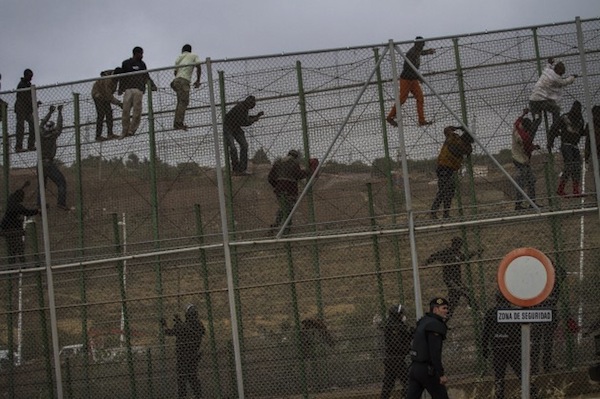 Israel apparently builds serious border barriers — why doesn’t Spain copy what they do?

A thousand Africans tried on Wednesday and around half got through, and all of them will now be contacting everyone they know to tell them how easy it was to snooker the feeble Europeans and get in. Weakness invites more assaults.

Around 1,000 would-be immigrants stormed the border fence between Morocco and the Spanish North African city of Melilla on Wednesday morning, with around 400 managing to enter the enclave.

The attempt to cross into Spain took place at 5.30am near Melilla’s Barrio China border post, Spanish daily ABC reported.

Those migrants who did manage to cross the six-metre (20-foor) high border fences into Spanish territory ran towards the already overcrowded CETI refugee centre.

A further ten immigrants spent some two hours on top of one of the border fences before coming down at around 7.30pm. Two remained on the fence at 8.30am.

The final number of people who attempted to cross is not yet known, but Wednesday’s border ‘assault’ is considered one of the largest ever, ABC said.

“It was a very large number,” the president of the city of Melilla, Juan José Imbroda, told Spanish public radio RNE. “An exterior part of the barrier was pushed over.”

“The Guardia Civil police deployed in large numbers but it was hard to stop it,” he added.

The flow of desperate Africans heading to Ceuta and Melilla has surged over the past year, with migrants regularly storming the border fences.

Others try to smuggle themselves past checkpoints hidden in the undercarriages of cars or sail across the strait of Gibraltar to mainland Spain in flimsy inflatable dinghies.

The government has said recently, however, that the number of undocumented migrants reaching Spanish shores by boat eased by 15 percent overall to 3,237 in 2013. That number was also down 90.7 percent on 2006 figures when 39,180 reached Spain by boat, the ministry added for context.

On February 6th around 15 migrants drowned in Moroccan waters while trying to swim to Ceuta from a nearby beach.

Migrants who reach the cities are taken to overcrowded processing centres while authorities decide whether to grant them asylum or send them back to their countries of origin.