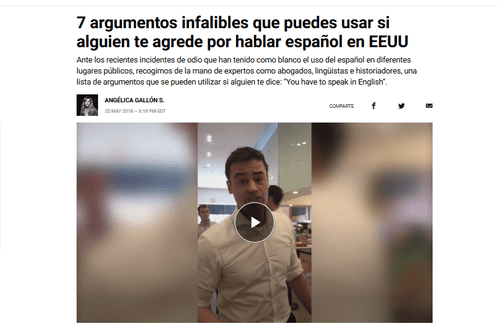 Said In Spanish: Univision’s Seven “Infallible” Arguments For Speaking Spanish In The United States Are Not Infallible

See also: In Quebec, Aaron Schlossberg Would Be a Hero And The Restaurant Fined—Because Quebec Wants To Survive As A Nation

When Americans are caught on camera telling Spanish-speakers to speak English or go back to Mexico, the Main Stream Media have a field day. Not least among those media: the Spanish-language Univision network. Just recall the Moral Panic after lawyer Aaron Schlossberg told two employees at a New York City restaurant to speak English to customers. And Schlossberg isn’t the only American fed up with hearing Spanish, as this compilation at YouTube shows. (Significantly, women seem particularly perturbed.)

These videos are made to order for Univision, which presents them as examples of “hate.” The Treason Lobby network recently offered seven “infallible” arguments with which a Spanish-speaker can defend himself from such “attacks.” The arguments are really comments you hear all the time, and they really aren’t infallible. But given that they bear upon the National Question, which isn’t going away any time soon, let’s take a quick look at them [7 Argumentos Infalibles Que Puedes Usar Si Alguien Te Agrede Por Hablar Español En EEUU (Seven Infallible Arguments You can Use if Someone Attacks You For Speaking Spanish In The United States), by Angelica Gallon S., Univision, May 25, 2018].

Readers get each point in English and Spanish, then, curiously, more detail in Spanish. Maybe the muchachos at Univision didn’t want the gringos to know too much.

This one contains several sub-arguments provided by a civil rights lawyer.

If a Spanish-speaker gets the grief from a government official, store owner or manager, the aggrieved should reply that telling him not to speak Spanish violates his “civil rights.”

On the other hand, Univision’s Gallon admits, a Spanish-speaking waiter or waitress might have to speak English at work. (In a border town restaurant once, the waitress couldn’t explain the mysteries of the salad bar, so my family and I—all Spanish-speakers--left).

Now, if an ordinary American is speaking with Univision’s reader, the latter’s retort becomes very aggressive: he should threaten to call the police. And why is that? Because telling a Spanish-speaking person to speak English is an “attack” and “a serious crime.” So Americans had just better watch out: “[T]he mere accusation [of said attack] can generate grave legal problems in the life of the accused.”

Sounds like a threat. One wonders if Univision has more contempt for ordinary Americans than for government officials or business owners.

We hear this one all the time, and not just from Univision.

Carter’s claims must be unpacked one sentence at a time.

This “infallible” argument quotes Rosina Lozano, an assistant professor of (Latino) history at Princeton [Email her] Here it is:

According to Lozano, in the southwest of the United States, in the early years, Spanish was not just the language of government, but that it was necessary to construct the political system [of the Spanish colonies]. “The omission of languages besides English such as Spanish, in the great national history has effectively eliminated the collective consciousness of multilingualism.”

Lozano refers to the Spanish-speaking colonies in the Southwest, of course. But they were colonies of Spain and later part of Mexico. They were not part of the United States, which began on the East Coast as the 13 English colonies. Eventually, the country spread across the continent and absorbed these sparsely-settled Spanish-speaking areas. Thus, the claims that “Spanish has always been spoken in the United States” is a far cry from historical truth.

This one quotes Phillip Carter (see No. 2): “Although the United States has no official language, 31 states have declared through their laws that English is their language. Nevertheless, that doesn’t mean in any way that you can’t speak Spanish or any other language in these territories.”

Straw man alert! No one claims that speaking Spanish is illegal. Yet Univision declares that it might be illegal—an “attack”—for Americans to share their feelings about it!

As a Spanish teacher myself, I contend that it’s good for some Americans to learn Spanish. At least my students should! But it should be learned as a foreign language, not as a language Americans are compelled to learn for civic purposes.

These are the same people who advise readers to threaten Americans with calling the police, but anyway, a person’s speaking Spanish does not, in and of itself, prove one to be an illegal alien. Another  straw man, given that no one seriously claims this. However, speaking Spanish certainly suggests one is an immigrant, and perhaps, an illegal immigrant. Combined with other things one might observe, it could create justifiable suspicion.

Certainly, being bilingual is good for one’s mind, but it’s certainly not the only factor contributing to having a good mind. Besides, it’s irrelevant to these social and political arguments. These activists use it to feel superior to and insult monolingual, middle-class Americans.

The bottom line: The folks at Univision and their fellow travelers want Americans to speak Spanish.

That gives them more viewers and more advertising revenue. And more job security. And more social and political power.

They are cultural warriors, fighting for the advancement of their people in the United States. A big part of that advance requires pushing the normalization of Spanish.

Let’s suppose that mass immigration, non-assimilation of immigrants and the power of politicians such as Jeb Bush and Sen. Tim Kaine, combine to make the United States a Spanish-speaking country. It’s not impossible. I

Would Univision be so keen on bilingualism then--or would Spanish alone be good enough?