The vast Mexican consular network doesn’t just provide services for Mexicans within the United States. If you put the whole picture together, there’s a far larger agenda.

The Mexican government made it easier for Mexicans in the U.S. to vote in Mexican elections while residing in the U.S., including providing a special voter ID. 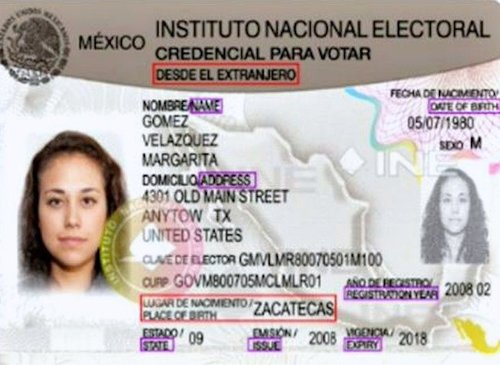 Of course, the United States allows expatriates to vote abroad by absentee ballot. I voted that way when I lived in Mexico.

But look at the big picture. Millions of Mexicans live here and the Mexican government is promoting dual citizenship. It’s securing its own interests. Yes, they are making it easier for them to vote in Mexican elections and tie them to the mother country, but they’re also telling them to become American citizens to vote against Trump. It’s so blatant that even the Main Stream Media has noticed.

As a response to the Donald Trump challenge, Mexico has recently replaced its ambassador to the U.S. with one Carlos Sada.

La Opinión reports Garcia was the Mexican Consul in Dallas from 2004 to 2006. The report provides an idea of his new priorities.

The new appointment of Garcia occurs when it seems that the magnate Donald Trump has secured the Republican Party presidential nomination, after taking advantage of a discourse that frequently attacks migrants and the Mexican government.

Another article in La Opinión (a paper designed for Spanish-speakers in the USA) announced on April 29th Mexican consuls in the U.S. “will have the authority to register children of Mexicans (both newborns and adults) without a birth certificate in the United States…” [Cónsules podrán registrar a hijos de mexicanos recién nacidos en EEUU, (Consuls will be able to register newborns, children of Mexicans, in the United States,) by Gardenia Mendoza, April 29, 2016]

This reform passed unanimously in both houses of the Mexican Congress. Now, Mexicans who lack birth certificates themselves can still register their children as Mexican citizens, at a Mexican consulate, if their child is born in the United States. This matters because “having to travel to Mexico to carry out the process is a complicated situation for the indocumentados [illegal aliens] in the United States.”

This is good news. We can immediately stop registering children of illegal Mexicans, and tell them, “No problem, you can go down to your local Mexican consulate and register that baby as a Mexican citizen.”

But in the eyes of the Islamic State, the question is settled. A new fatwa declares Hispanics are Westerners and therefore targets. (Congratulations?)

The message is entitled rather inclusively:

The article points out Mexico’s flag was among the sixty (!) targeted nations in an ISIS propaganda video last fall.

La Opinión triumphantly posted a video of an encounter at a checkpoint between “a Mexican origin driver” and Border Patrol Agent, in which the former supposedly shut up the latter. It’s petty but is hailed as a great triumph. And it’s revealing.

My family visits Mexico frequently so we often encounter checkpoints. I always tell my wife to get our documents in order and give my sons a little speech about how to behave at a checkpoint (no funny business).

In contrast, after being asked by the Agent about his trip, the driver here (accompanied by his sons) responds in Spanish.

“We are all U.S. citizens” the man said in Spanish, adding they were born in Galveston.

“Why don’t you speak English?” asks the Agent.

“Porque no quiero (because I don’t want to)” is the response. The Agent waves him on as the driver brags, “…no mas por mis huevos”, an obscene expression that means “I do what I want”. [La respuesta que dejó calladito al agente migratorio que cuestionó no hablar inglés, April 25, 2016]

Illegal alien identity causes many problems for American citizens. La Opinión is concerned about identity fraud, not because of how it hurts the U.S. but because of how it sometimes hurts the perpetrators themselves or their families. A recent article was titled, “Cientos de migrantes en problemas por usar otra identidad en EEUU” [Hundreds of migrants having problems for using another identity in the United States, by Isaías Alvarado, May 2, 2016]

La Opinión is defending the lawbreaking fraudsters and making them out to be victims!

The main human interest story is the sad saga of a 52-year illegal alien who committed suicide after he was arrested for driving drunk (and without ID) and crashing into two vehicles in front of a Los Angeles bar.

This individual had at least three identities.

His wife, who resided in Mexico, has no pension or any inheritance.

It’s sad and I don’t rejoice over suicide. But yes, having multiple identities can get you into trouble and hurt your family.

The article reports the Mexican consulate in Los Angeles deals with one such case very day. Some are “so complicated that they have put the migrants at risk of being deported”. Imagine that!

The article declares forthrightly “…to use another name or birthdate is common among migrants” (which of course means illegals.)

The consulate reports, “There have been cadavers that have been stranded in this country [the U.S.] or children who have not been able to receive the Mexican nationality for this reason.” Sometimes, illegals use birth certificates belonging to relatives in Mexico.

“We cannot authorize the movement [of remains] with the death certificate of a person who is possibly alive in Mexico,” said Marina, arguing that in this way somebody could commit fraud, such as illegitimately claiming a life insurance payment.

How scrupulous! Somebody in Mexico might get defrauded! They show no such concern for our citizens of course.

MEXICO ABANDONING NON-INTERVENTION? IN THE CASE OF THE U.S., THEY’VE BEEN INTERVENING FOR YEARS 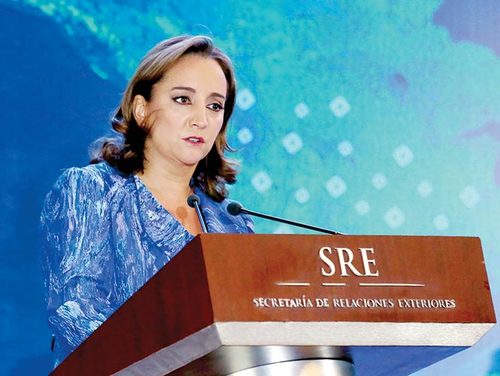 She said: “It’s more and more difficult to draw a line between the domestic and the international. Climate change is a clear example.” She also cited the possibility of humanitarian intervention.

Of course, when it comes to American immigration policy, Mexico has been meddling in our affairs for years. It’s just that our political class has no problem with it.

WHY A MEXICAN JOURNALIST IS BECOMING A U.S. CITIZEN 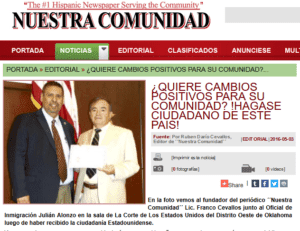 Ruben Dario Cevallos  is the editor of “Nuestra Comunidad” (Our Community), a Hispanic newspaper/website in Oklahoma. “Our Community,” doesn’t refer to “the Community of People in Oklahoma” but “Hispanics in Oklahoma City.”

Cevallos has lived here since 1968 (!) but never felt the need to be a citizen until this last year.

His new editorial is entitled ¿QUIERE CAMBIOS POSITIVOS PARA SU COMUNIDAD? !HAGASE CIUDADANO DE ESTE PAIS! (Do you want positive changes for your community? Become a Citizen of this country!, May 3, 2016]

Accompanying a picture of Cevallos receiving his citizenship documentation are the words:

The most important reason I decided to become a citizen, now that I do not need the benefits of receiving jobs reserved for citizens nor of claiming a member of my family to come to this country, is that I have felt the civic call of contributing my vote to elect a candidate that will not be so hostile as the anti-immigrants Donald Trump and Ted Cruz.

So after decades of living here, Cevallos wants to naturalize to stop Donald Trump or Ted Cruz. After the usual slams against Trump and Cruz, Cevallos calls indocumentados “the engine of this country.” This is a typical premise of Hispanics–our country just couldn’t make it without them.

Incredibly, Cevallos admits his acquisition of American citizenship is essentially a hostile act against his adopted country in defense of his Raza.

I think that all the Mexican and Latin American brothers who are rooted in this country or that intend to obtain benefits and defend our dignity, we are obligated to acquire the United Statesean (estadounidense) citizenship, which will not affect at all the citizenship we have. We will continue being Ecuadorians, Colombians, Mexicans, etc.

What do they owe the United States then? Well, Cevallos does say Hispanics should show appreciation to the United States “for having taken us in and having given us the opportunities that our own countries denied us.” How do we make sense of this? They still consider themselves as “Ecuadorians, Colombians, Mexicans,etc.” even though they take the U.S. citizenship oath renouncing their former citizenships. So they’re saying the oath doesn’t matter. They feel a civic duty to “Hispanic communities”.

Oh, but they also appreciate the United States for all the good things they get, including things that Cevallos thinks they can’t get from their home countries.

We already have millions of dual citizens in the United States. What percentage of them think like this?

How about those of us who only have one nationality – the American nationality? What’s in this massive demographic transformation for us?