In San Diego, California, Mexico’s Excelsior has reported, the “locals” have organized a patrol to “protect the community”—but not from petty crime or even gang violence, like, say, New York’s Guardian Angels. [Arman equipo antirredadas; ayudan a migrantes en EU (“Anti-raid Team Organized, Aiding Migrants in the United States”), by Manuel Ocano, Aug. 9, 2019]

No, this unit has an altogether different job, as the logo on the “patrol car” proclaims: Protegiendo la Comunidad – No al Terror de ICE y la Policia (“Protecting the Community — No to the Terror of ICE and the Police”). 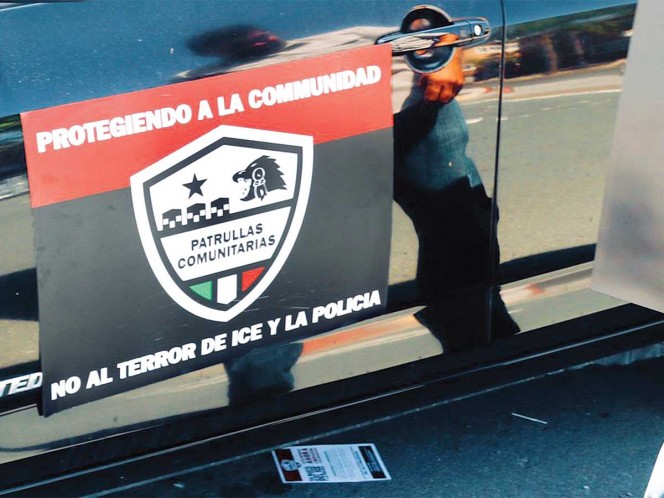 The caption under Excelsior’s photo above explains succinctly what the organization does:

Make that “illegal-alien Mexicans in the United States!”

According to Excelsior, the activists patrol “in the early morning, at dawn and in the evenings in neighborhoods of working families.”

The organization, formed by workers, operates with its own resources to document the operations of immigration agents. By filming them and advising the neighborhoods at the same time, the group works within the law.

Bear in mind this is San Diego, which is, last time I checked, still part of the United States, even if it is in Mexifornia.

Since the administration of President Donald Trump revealed that ICE was preparing to deport “a million” undocumented persons, this group does daily patrols of neighborhoods such as Lindavista, Sherman Heights, Logan Barrio and the south of San Diego, in alliance with other groups.

That’s a laugh. I’ll believe that Trump will deport a million illegals when it actually happens.

Anyway, one of the group’s coordinators was totally upfront about its goals:

Benjamin Prado, one of the coordinators of the Community Patrols, explained that the biggest contribution of the project is "to frustrate the operations of La Migra, to prevent them arriving by surprise to separate working families.”

Of course, “frustrating the operations of La Migra” is a federal crime. See Obstructing a Federal Officer, 18 USC 111, and 8 USC 1324, harboring illegal aliens.

…when many immigrants leave their homes to go to work or leave children at school, one of the times when the agents take advantage of the surprise factor.

A community patrolman who uses his cellphone “to transmit live videos on social networks and thus alert the migrants of the presence of agents” sent this message:

We want to inform the Lindavista community that we have here an ICE van on Lindavista Road and Tate, so you can be aware.

So there you have it. A “community patrol” blocks ICE operation to support Mexican illegals … in San Diego, California, USA.

Are the patrols coming to your town?

And who is paying for them?

And all the screeching about it proves that everyone knows many immigrants are indeed using welfare. But aren’t those illegals “doing the jobs Americans won’t do”—which would mean they don’t need welfare?

That’s typical rhetoric. We’ve been such pushovers so long that if we actually get tough, then immigration advocates will present it in the worst possible light. Look, for example, at the picture of Trump at the top of the article, which ruefully reports that legal immigrants face must choose welfare or residency: 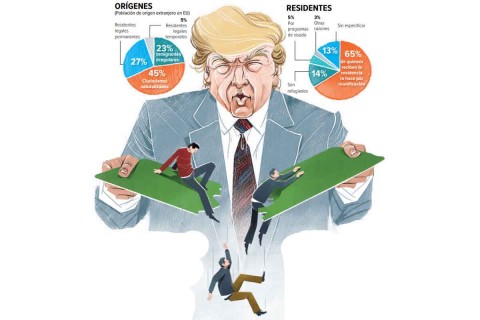 The government of President Donald Trump will punish legal migrants who depend on welfare, such as government-subsidized food and housing.

Note the  article also acknowledges that immigrants use welfare. It zeroes in on Mexicans:

The provision will impact 2,380,000 legal-resident Mexicans who bear a Green Card.

One out of every five legal residents is an immigrant from our country. …

The new rule, the idea of Stephen Miller, the principal immigration adviser of President Donald Trump, will also impact millions of immigrants who are in the process of legal residence through the “family reunification” route, when a citizen requests legal residence for his parents or siblings.

The NYT article helpfully points out that “65 percent  of the more than a million immigrants who receive legal residence annually do it through family reunification.”

Guatemalans Voting In The US

Guatemala is looming larger and larger in our immigration policy, and not just because so many Guatemalans have crossed the border illegally. Guatemalans here voted in Round 2 of the election in Guatemala that elected President-Elect Alejandro Giammateei on August 13. He takes office in January, and is not content with the immigration deal the country struck with the Trump administration, which hasn’t yet been approved by the Guatemalan congress.

A “reform” passed in 2016 made it possible for Guatemalans in the U.S.  to vote in Guatemalan elections.

Guatemalans resident in the United States voted for the first time in the second round, to elect the president who will govern the destiny of the country from 2020 to 2024.

So where did all those Guatemalans cast their ballots? At 109 voting stations in Los Angeles, Houston, New York City, and Silver Spring, Maryland. Some 63,695 Guatemalans were eligible to vote, but  just 521 actually did so. Giammattei received 411 votes.

A whopping 734 Guatemalans voted in the first round on June 16. [Cuánto costó cada voto emitido en las elecciones 2019 de Guatemala en Estados Unidos (“How much did each vote cast in the 2019 elections of Guatemala in the United States cost?”), by Irving Escobar, Prensa Libre, June 17, 2019]

Guatemala, by the way, has twelve consulates in the United States. Mexico, of course, has 50.

Whoopee! Nearly One In Four Guatemalans Want To Emigrate

Meanwhile, back in Guatemala, a poll showed that nearly a quarter of Guatemalans want to emigrate.

Each day there are more Guatemalans who see migration as the only option to survive. …

Despite how difficult migration has become today with increasingly more coercive measures in both the U.S. and Mexico, 23% of Guatemalans see leaving the country as the only way to get ahead.

[La única opción de superarse es migrar, considera 1 de cada 4 encuestados (“One out of Four Think The Only Way to Get Ahead is to Migrate”), by Sergio Morales Rodas, Prensa Libre, August 14, 2019]

Frighteningly, 50 percent of those polled

have at least one close family member residing in the United States, which can encourage this desire to emigrate, not only for the desires of economic advancement, but also the yearning to be reunited with their relatives.

Here’s an idea: Tell your relatives to return to Guatemala and reunite there.