SAID IN SPANISH [4 ITEMS]: “White Supremacist” Groups On The Border; What Is TX Gov. Abbott Up To?; Murderous Mayans; Etc.

Mexico’s Milenio recently reported that 140 American “white supremacist” groups are operating on the U.S.-Mexican border [Operan 140 grupos supremacistas en la frontera sur de EU (“140 Supremacist Groups Operate on the Southern Border of the United States”), by Laura Sanchez Ley, May 18, 2022]. We can view that claim with some skepticism given the sources: the FBI, and, wouldn’t you know it, the $PLC.

The piece is the typically alarmist Treason Lobby propaganda we see in the U.S. Leftist Mainstream Media:

Throughout the length of the Mexico-U.S. border, both private and government organizations have detected the activity of around 140 supremacist and hate groups, among whom are anti-immigrant and neo-Nazi groups.

As always, definitions are important. To find 140 groups, the newspaper had to cast a very wide net. “Anti-immigrant” means “people who don’t want Open Borders” who are lumped in with “neo-Nazis.”

And wouldn’t you know it, “extremist ideology is not limited to speech,” Milenio’s intrepid reporter found:

From 2019 to today, more than 1,000 crimes have been committed against the Hispanic community, as occurred this weekend in the United States.

Of course, the mass shooting in Buffalo was grist for the mill, too:

This Saturday [May 14], Payton S. Gendron, an 18-year old supremacist, killed ten persons in a Buffalo, New York supermarket, using the rationale that whites are being replaced by persons of other races. Sunday [May 15] there was another shooting in a Presbyterian church in California, which left one dead and four wounded.

(Left unsaid: that California shooting was perpetrated by an immigrant motivated from  a  China-Taiwan context.)

Yet in addition to concocting a connection between the Buffalo shooting and the border, the piece—complete with an $PLC map—dishonestly claims that immigration patriot groups “operate on the southern border” and are akin to “neo-Nazis” who promote violence:

Among the groups located in border states are Californians for Population Stabilization, who have openly declared in favor of the ‘stabilization’ of the population, and American Border Patrol, whose mission is to impede the entry of more immigrants. 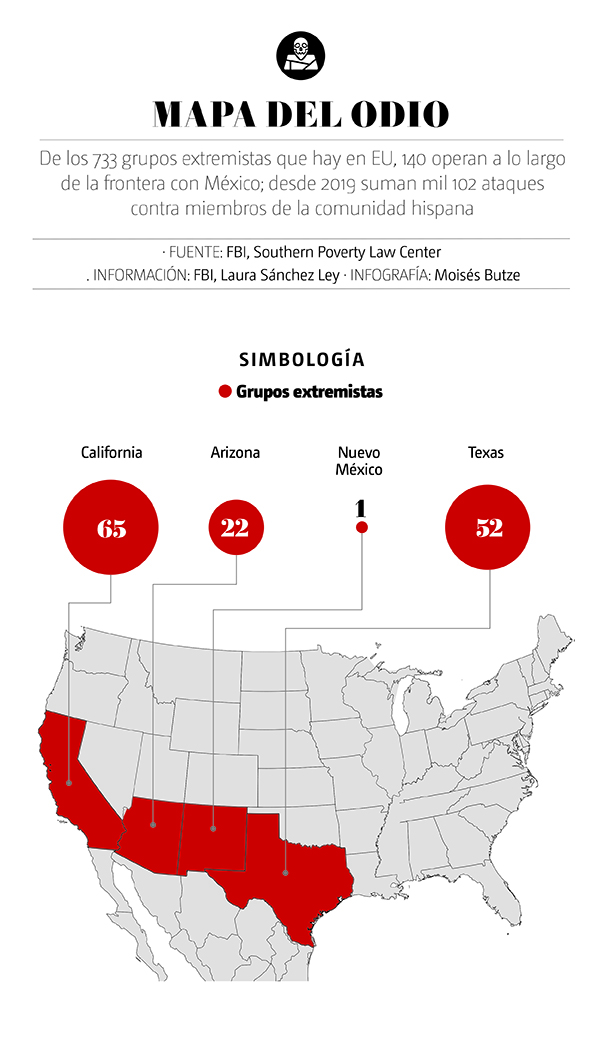 Neither of these groups promotes violence. And to say they “operate on the border,” as if supporters are patrolling it on their behalf, is simply nonsense.

Then again, for the Leftist Mexican media, any American who opposes Open Borders is evil—a possible “neo-Nazi.”

And just as the piece links the shooting in Buffalo with immigration patriotism, it links groups that “operate on the border” with the mass shooting in El Paso in 2019:

The states that border Mexico with the greatest number of groups are California, with 65, Texas, with 52, where one of the greatest tragedies against the Mexican community occurred, when in 2019, a white man entered a Wal-Mart store and killed 8 Mexicans.

Unsurprisingly, Mexican Foreign Minister Marcelo Ebrard (who as usual with elite Mexicans is very white—he’s actually of French Provençal ancestry) retweeted the piece, and called it an “important and meritorious investigation of one of the principal risks of our time: white supremacism.”

Forgetting that the charge is obviously bogus, that’s rich coming from a Mexican official. Mexico has a sky-high murder rate and drug cartel killers do as they please.

And Ebrard worries about “white supremacy”?

Perhaps it hadn’t occurred to reporter Sanchez and Ebrard, but if “hate groups” had staged “1,102 crimes against the Hispanic community” since 2019, and the United States were as racist and dangerous for Hispanics as they claim, millions of Central Americans wouldn’t be rushing to jump the border.

The Biden Regime will appeal Trump-appointed federal Judge Robert Summerhays’ temporary restraining order that stops the regime from ending Title 42 public-health expulsions at the border [Justice Department to appeal decision blocking Biden admin from ending Title 42, by Adam Sabes, Fox News, May 20, 2022]. But even if Biden doesn’t prevail, who would force the Regime to resume expulsions if it simply ignores the federal judge?

That question aside, “migrants” are well aware of the Title 42 squabble, and protested outside a U.S. consulate in the Mexican border city of Tijuana. The theatrics showed just how entitled “migrants” believe they are [Migrantes protestan en inmediaciones del consulado de EU (“Migrants protest outside the U.S. Consulate”), Milenio, by Said Betanzos, May 19, 2022].

“We don’t have Covid!” the protestors shouted. “Halt the discrimination against Latin America. Title 42 discriminates,” the signs they carried announced:

“We are all vaccinated, we have here the proof” pointed out Honduran Ana Morazan as she showed Covid-19 vaccination documents, issued by the Health Department of Baja California.

As we all now know, even the vaccinated can contract and carry the virus. And yeah, Title 42 discriminates—against sick illegals who will bring disease into the country!

Albert Rivera, a Protestant pastor who runs an illegal-alien shelter, declared that “Title 42 cannot be utilized in a discriminatory manner, that can’t be done.”

Whether Pastor Rivera knows anything about American immigration law we can’t say, but he still has his opinions, as do the “migrants” who show up at the border:

Marina Florencia, a Guatemalan who arrived in Tijuana with her family in November, put it this way:

“We all need to cross to the United States. But what they are doing in demanding our vaccinations is not valid, because they didn’t ask the Ukrainians to.”

In fact, Homeland Security Secretary Alejandro Mayorkas has imported tens of thousands of unvaccinated illegals, and last year confessed that 20 percent of illegals had tested positive for the virus. Yet he has released hundreds of thousands to infect heartland America.

“Ana, a microbiologist who fled Honduras after losing her house and arrived in Mexico the 11th of June of 2021,” doesn’t seem to care about that, and “expressed her disbelief that they only put obstacles for the Central Americans, as thousands of Ukrainians cross the border daily.”

“I never imagined, not even in my worst nightmares what I have endured—hunger, cold in the street, sleeping on the street, all of that,” Ana said.

Yeah, well, if Ana the microbiologist had stayed in Honduras, she might not be living on the street.

You’re not permitted to ask how Ana lost her house, or what sort of microbiologist tramps north with a bazillion illegals, thousands of whom are possibly infected with the Flu Manchu and other dread diseases.

On May 14, Texas announced it would provide the Mexican state of Coahuila with concertina wire (which we used in Iraq for barriers):

Texas will provide authorities in a Mexican border state with razor wire and training on how to deploy it in order to increase security at the U.S.-Mexican border. …

The unprecedented agreement between Texas and the Mexican state of Coahuila — which is situated across from Eagle Pass — will involve Texas providing the Mexican authorities with c-wire (concertina/razor wire) and training on its deployment near the border.

Texas Department of Public Safety said that in the coming days, Mexican officials will come to Eagle Pass and be trained by the Texas Military, take possession of the wire and return it to Mexico.

Trump wanted to put razor wire on his fence, but disloyal subordinates refused to do it.

Naturally, razor wire is…well you know what it is.

Bruja not only expects more “persecution, detention, and expulsion” of “migrants,” but also complains that they might hurt themselves while trying to get past the wire.

So how about just not crossing the border?

The Victims Were Murdered, But Not By Cartels

In contemporary Mexico, the human remains of victims are discovered from time to time.

In the southeastern state of Chiapas, a large amount of skulls were discovered.  It was immediately assumed that they were immigrant victims of drug war violence, a logical assumption.

But after investigation, it was determined they were victims from a much earlier era

Ten years after the discovery of some 150 skulls in a cave in the municipality of Frontera Comalapa, in Chiapas, this Wednesday a researcher from the National Institute of Anthropology and History (INAH), Javier Montes de Paz, explained that this could have been a tzompantli, a pre-Hispanic altar to worship the gods from between 900 and 1200 AD.

As part of a virtual conference 'The Cave of Comalapa and its Prehispanic Funerary Content: Human Remains', imparted by physical anthropologist Javier Montes de Paz, investigator of the INAH Center of Chiapas, details were revealed of this discovery from the year 2012, when a report alerted Chiapas authorities of a cave where it appeared there were bones of hundreds of supposedly murdered migrants.
[INAH: Altar prehispánico, no escena de un crimen el hallazgo de 150 cráneos en 2012 en Comalapa (“INAH: pre-Hispanic altar, not crime scene, 2012 Discovery of 150 skulls in Comalapa”), Isain Mandujano, Chiapas Paralello, April 27, 2022 ]

A tzompantli was a skull rack used in Mesoamerica to mount the skulls of human sacrifice victims.

So these were skulls of victims - from a thousand years ago.