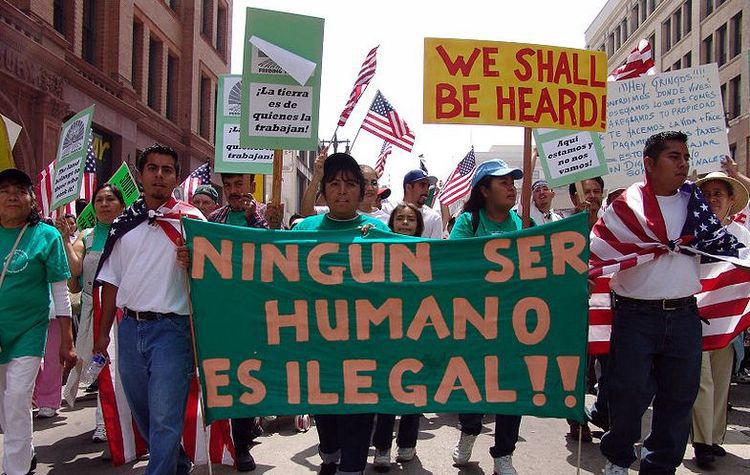 Guatemala’s Prensa Libre (Free Press) rang alarm bells last week about the mistreatment of Guatemalans, especially activist Guatemalans, in Trump’s America. A solution might just be for Guatemalans, to go live in, oh, I don’t know, Guatemala. But alas, everyone has a right to live in America except real Americans.

And foreigners, particularly illegal aliens, have the right to lobby for Open Borders.

To engage in activism in favor of migrants in the United States has become a difficult job in recent times for Guatemalans and the Hispanic Community in general. Animated by the anti-immigrant rhetoric of President Donald Trump, some Americans have taken on the task of reporting some leaders of organizations who are under investigation by migratory authorities. 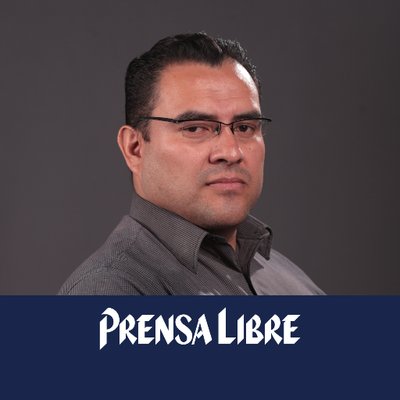 This past September 5th, Roland Gramajo Reyes, a Guatemalan leader of Houston, Texas, who has been living in the United States for 25 years, was detained and now faces a process of deportation. All his family, wife and five children live in the United States and are U.S. citizens.

Gramajo,  Morales Rodas [Tweet him] explained, was deported home in 2004 only to return. Then he became a “Guatemalan leader.” Guatemalans could probably use a few good leaders back home, but an anonymous tipster reported Gramajo’s whereabouts:

[P]ro-migrant groups say that…fear among the Hispanic community has grown because they know that now agents are under more pressure to enforce the law and utilize every means at their disposal to do so.

Imagine that. Agents are “under more pressure to enforce the law.”

Walter Batres, member of the Guatemalan Migrant Network, does not discard the possibility that the detention of Gramajo was a reprisal by the authorities for the activism that he practices in Houston.

If true, it would be an example of “strategic deportation,” a smart move that would help cripple illegal-alien activism.

But to Guatemalan illegals, it means something evil is afoot:

Eddy Garrido, head of the Foro Migrante de Guatemala [Guatemalan Migrant Forum] says that “We are always attracting the attention of and are exposed to reprisals by both supremacist groups and the law itself.”

Get the connection? “Supremacist groups and the law itself” are persecuting innocent illegals. Garrido reportedly complained someone even threatened Guatemalans with a pistol: “With the rhetoric of President Trump they think that they have the right to express their erroneous ideologies.”

Another voice quoted was that of Cesar Espinosa, of the group Fiel en Houston (“Faithful in Houston”) who complained that “some persons who are speaking against the administration or ICE are being attacked by these same agencies.”

So illegal-alien activists loudly call attention to themselves, then complain with surprise when immigration cops notice and arrest them. 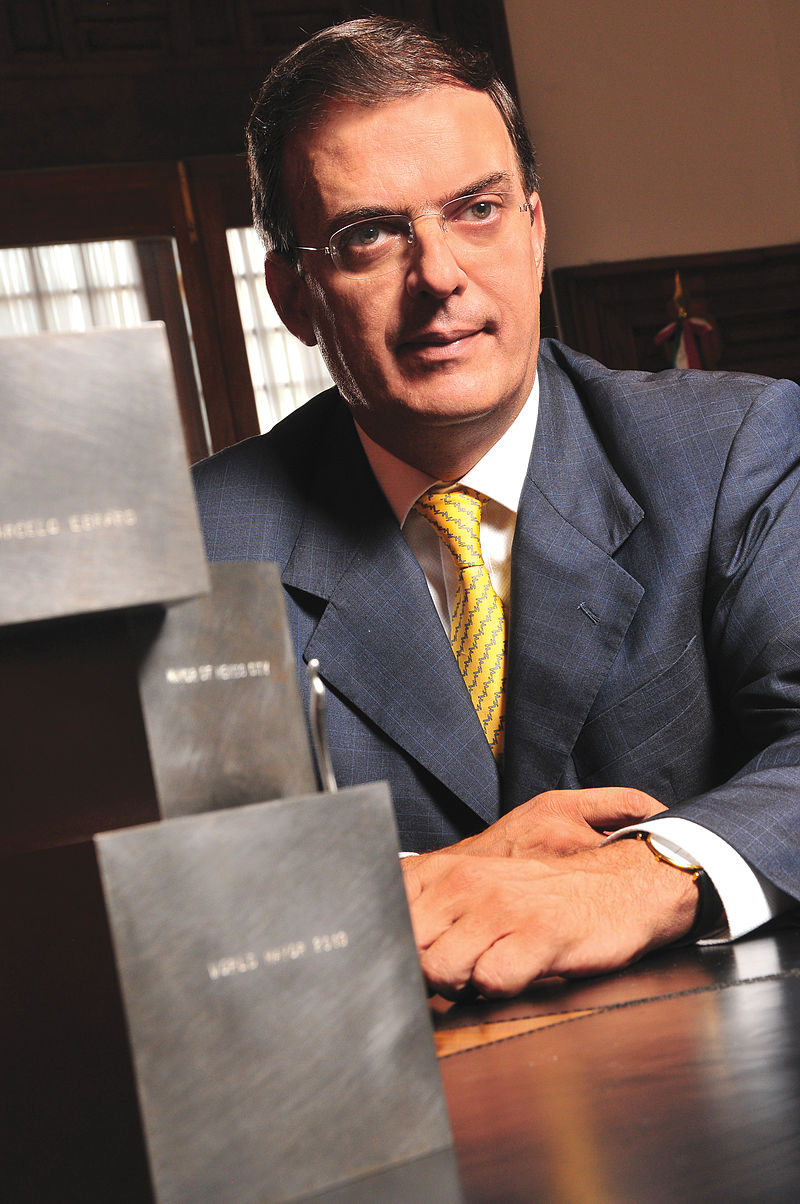 Ebrard is of French ancestry, his ancestors having come from a commune called Barcelonnette . (That’s commune as in a legal administrative unit of French territory, not a hippie commune.)

Being the white foreign minister of a country with a mestizo majority, apparently, doesn’t disqualify Ebrard from speaking authoritatively about “white nationalism” in the United States.

He discussed it at his press conference after the mass shooting in El Paso.

[I]t is not an isolated act, and it is not a person who, as we say in Mexico, is loco, but he is a part of a digital network of persons who think the same way. ... It is a movement and there are persons who think the same way. So what we can and should do is take preventive legal measures and prepare ourselves against those who instigate this type of attack that we consider terroristic.

The Attorney General of Mexico is preparing an investigative file against the individual who perpetrated this massacre…It will be the first case that I remember of a legal process in Mexico against a terrorist act committed in U.S. territory against Mexicans and the Mexican-American community. I believe it can be a great advance…against the growth of white supremacism, xenophobia, discrimination and hate speech. This is the adversary for Mexico.

So, having solved all of Mexico’s problems, not least the mass graves authorities find with regularity,  Mexican officials will now police CrimeThink in the United States.

Does Ebrard or his attorney general believe their “legal process” will end in extradition of the shooter? Even if it did, a trial would not get justice for the victims or their families. Mexico doesn’t have the death penalty.

Mexican Independence Day On U.S. Soil In The Age Of Trump

Mexican Independence Day, celebrated September 15-16, is widely recognized in the United States. As Spanish teacher, I have a fiesta for educational purposes. For many, though, it affirms Mexican identity on U.S. soil.

As every 15th of September, acts that commemorate the independence of Mexico have an extraterritorial character in the United States. From coast to coast, the 35 million-plus persons of Mexican origin celebrate this festive ritual for an independence that now more than ever is in question and that in many senses has become an outbreak of nostalgia for the faraway fatherland that is contemplated with sadness and even terror from the United States. Particularly since Donald Trump became President of the United States and unleashed, with his policy of “zero tolerance”, an atmosphere of persecution, hate and racist terrorism.

You can see where this is going.

Despite this, or maybe because of it—these days of patriotic holidays become for the migrant community in the United States a window of opportunity for the reaffirmation of an identity, that takes place from southern California to the neighborhoods of New York or Chicago.

Hernandez elaborated on Mexican identity, and all the work that Mexicans do in the U.S, and also helpfully described the Big Day in Orange County, California. Specifically, he wrote, Santa Ana is “one of the cities with the biggest floating population of undocumented immigrants,” where “the faces of men and women of dark skin leave the shadows to take their children to listen to mariachi music” and see Mexican historical heroes.

Even better, at least for Hernandez, the illegals participate in this

…patriotic ritual…from the heart of southeast California, an enclave of Republican conservatism and anti-immigrant organizations such as the Minutemen.

Then comes Hernandez’s key message—it’s us vs. them:

For the Mexican Diaspora, the month of September brings the festival of Independence and the return to their roots. For the Anglo-Saxon community, on the other hand, these festivals only accentuate the “invasion” of the “illegals.”

In the midst of this continuous clash of demographic and cultural tectonic plates, which have accentuated under the regime of Donald Trump, the Mexican Migrant community expresses an act of reaffirmation in the streets, parks and cultural centers of various parts of the country as in Santa Ana, Los Angeles, New York, Houston or Chicago.

To sharpen the point, Hernandez closed with an endorsement of what is a sin here in America—nationalism:

[I]t is not difficult to prove that the nationalism and love for Mexico is felt in this month of patriotic festivities stronger than ever in the United States, particularly when many of our fellow citizens have everything against them under the regime of Donald Trump. To all of them, happy patriotic holidays.

The takeaway: Hernandez and his readers see these festivals and parades as a means to mark territory in an anti-American culture war.

Despite…30,000 job openings on the northern border of Mexico, Central Americans in Ciudad Juarez, Chihuahua, have only taken 70 … because they prefer “to do nothing” while they wait an answer from the United States, according to the Confederación Patronal de la República Mexicana [the “Employers’ Confederation of the Mexican Republic,”  (a Chamber of Commerce-type organization)known by its initials of Coparmex]

The jobs are in maquiladoras [foreign-owned factories], said the organization’s vice president of business development, Guadalupe de la Vega: “We need a lot of labor.”

Problem is, the “migrants” don’t want to work.

Nevertheless, he explained that there is a lack of interest among the irregular foreigners, and they make all sorts of pretexts for not working. Many say “I have money that my relatives sent,” “I still have money,” or that “it is difficult to have a job because you have to go early,” since many of them aren’t accustomed to the schedule and don’t adapt.

Another factor, he said, is that they are confident that they will be allowed to enter the United States and they don’t plan on doing anything productive while they are stuck. (Emphasis added)

The Coparmex organization, by the way, provided them with food and transport. But they still didn’t want the work.

That’s all the more reason to send them back home before they cross the border. After all, if they won’t do the jobs Mexicans "won’t do", how can we expect them to do the jobs Americans “won’t do" ?