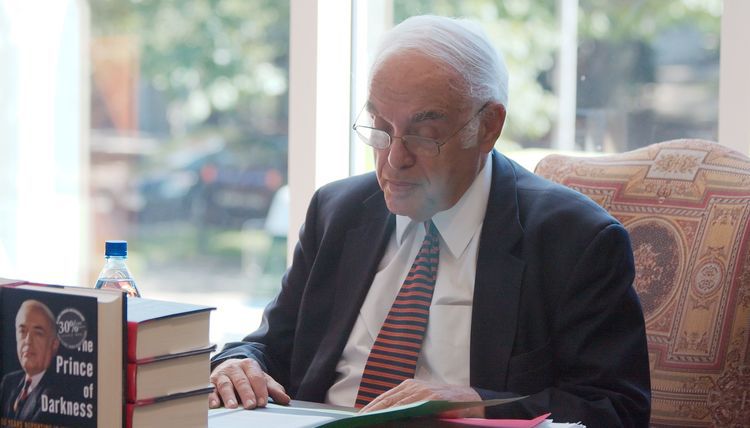 I did—as Nixon peeled the curtain back to reveal a group of reporters gathered for his press briefing.

Nixon had directed my attention to a swarthy fellow seated in the front row, separate from the rest, who seemed to be scowling, but at no one in particular. It was Robert Novak.

Formal introduction came on the first day of the 1968 New Hampshire primary. Nixon had asked me to be acting press secretary, and columnist Nick Thimmesch, a friend, suggested I join Novak and Pat Ferguson of the Baltimore Sun for a beer.

I did, and the pair lit into me, mocking that Nixon was up to his old tricks, lying to the press, sneaking off to tape campaign commercials in Hillsboro. The "new Nixon" is a bleeping fraud—it's the same old Tricky Dick.

Fifteen minutes of this and I got up, departed and told Nixon and H.R. Haldeman I did not have the temperament for the job. Ron Ziegler was brought aboard.

This was my introduction to a man who has been arguably the best journalist in Washington in the last half century.

I write that not because, for 25 years, Novak has been a friend. Nor because we worked together for years on "The McLaughlin Group" and CNN's "Capital Gang" and "Crossfire." But because there is no better reporter-columnist and interviewer-commentator in this town. Like Billy Goodman of the old Red Sox of the 1940s, Novak can play any position and deliver a steady .300 batting average.

For decades, Novak has been known in Washington, to friend and foe alike—both are legion—as The Prince of Darkness,

the title of his 600-page memoir published this month by Crown Forum.

Novak recounts his 50 years in journalism, beginning with his stint as an AP reporter in mid-America that brought him to Washington and The Wall Street Journal, whence he departed to join Rowland Evans of the old Herald-Tribune to form the Evans-Novak team. For three decades, Evans & Novak's Inside Report was among the best known and most widely syndicated columns in the nation.

On the first page, Novak—the pivotal figure in the Valerie Plame-CIA leak story—tells where and how he first met Joe Wilson, and his unprintable assessment of the ex-ambassador. That chapter explains his side of a story that made him a figure of national controversy and led to the naming of special prosecutor Patrick Fitzgerald, the investigation of Karl Rove and the Bush White House, and the conviction of Scooter Libby.

But the CIA leak story covers only a fraction of Novak's career, and a fraction of this frank and candid memoir in which Novak relates stories and renders judgment on the presidents he has known from LBJ to Bush, their adversaries, and the most controversial and famous statesmen, staffers and journalists of the last half century.

As no one has had the same experiences as Novak, none will share all of his judgments on those he regards as honorable and heroic, and those he has come to believe were or are poltroons and phonies.

From having read a hundred pages, this is both a brutally candid and important book, as well as a riveting read—for those who have lived much of this history with him, and for those who would understand this vast slice of American history to which Novak had as privileged a seat as he is routinely given near the coach at the basketball games of his beloved Maryland Terps.

Ronald Reagan famously said of the platform he intended to run on, it should be all "bold colors ... no pale pastels." Some of Novak's opinions are scarlet. While writing, he told one and all he intended to use his memoir to clear up some matters and settle some accounts. He does not disappoint.

Often I have mentioned to friends that were I an editor of a major paper and had but one column to carry, it would be Novak's. His sources are the best. His opinions are upfront invariably, he is made privy to conversations and meetings that ring true in his telling. As few other columnists in his time, Novak continually breaks stories. That he has survived so long, after having enraged so many, is testimony that when Novak is denounced or disputed by some powerful figure, his editors believe him, not them.

At the party in his Pennsylvania Avenue apartment to celebrate his baptism as a Catholic, Pat Moynihan said to me, among others, "Pat, now that we have made Novak a Catholic, do you think we can make him a Christian?"

If the late senator were still with us, one would have to inform him that this remains a work in progress.

Justice Holmes once observed, "It is required of a man that he should share the passion and action of his time, at the peril of being judged not to have lived."

Of Robert Novak, it may be said, he has surely done that.