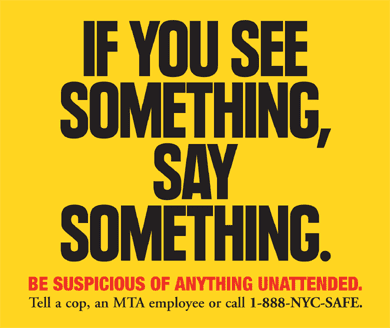 "If you see something, say something." That's what our homeland security apparatchiks incessantly preach. But 13 years after the 9/11 attacks, the freedom to warn is in danger and vigilant whistleblowers are under fire.

Listen to Robert MacLean. He's a former Air Force nuclear weapons specialist and Border Patrol agent recruited by the government to serve as one of the first federal air marshals after 9/11.

In 2003, MacLean underwent emergency training to prepare for a new round of al-Qaida hijacking threats. Jihadists exploiting visa and screening loopholes had planned to target East Coast airliners, according to intelligence analysts. For unknown reasons, however, the Transportation Security Administration abruptly called off air marshals from duty on nonstop, long-distance flights—just two days before the anticipated hijacking.

How did they notify the air marshals? Cue the Keystone Cops. "TSA chose to send the unlabeled text message to our unsecured Nokia 3310 cellular phones instead of our $22 million encrypted smart phone system. There were no markings or secrecy restrictions on the message," MacLean recounted to Congress this week. "We all thought it was a joke given the special training we had just received and the post-9/11 law that nonstop long-distance flights were a priority."[Testimony of Robert MacLean (PDF)]

A supervisor told MacLean the agency was broke and there was nothing he could do. Appalled at both the dangerous pullback and the reckless way in which the feds notified the air marshals, MacLean then contacted his department's inspector general hotline and was warned he would be "cutting (his) career short if (he) pursued the issue further." Instead, he went to the press and made his homeland security concerns public. In 2006, MacLean was fired.

More than a decade later, the dedicated security expert has battled the feds who retaliated against him. He was forced into bankruptcy and shut out of law enforcement jobs. His legal case heads to the Supreme Court this fall. God bless him. Despite the consequences, MacLean would do it all again in a heartbeat.

"I blew the whistle because I had to," he testified this week. "I could not live with the tragedy risked if I had been the cynical silent observer."

MacLean is not alone. Do you remember 10 years ago when then-Federal Air Marshal Service Director Thomas Quinn refused to allow his employees to dress undercover? Quinn, a former Secret Service agent, insisted that air marshals abide by military-style grooming standards and a rigid business dress policy regardless of weather, time of year or seating arrangement. Yes, really. Marshals were ordered to dress like characters straight out of "Men in Black"—leaving them vulnerable to terrorist identification.

Critics of the code dubbed Quinn the Captain Queeg of homeland security. He even assigned fashion police to enforce the rules his own spokesman denied existed. Homeland security bureaucrats in Washington back then downplayed the marshals' complaints about the dress policy and other directives and leaks that undermined the marshals' anonymity.

Officials at headquarters smeared the messengers inside and outside the agency and denied any wrongdoing. One top special agent in charge of the marshals' Atlanta office, Don Strange, was fired after criticizing the dress code and boarding procedures that made the marshals' identities obvious. Another agent, Frank Terreri, faced retaliation for whistleblowing and was forced to sue to protect his job.

Today, the Federal Air Marshal program remains riddled with mismanagement, corruption and neglect. In April, FAM Director Robert Bray resigned amid an embarrassing gun scheme probe. And earlier this year, six of 24 air marshal offices closed, and hiring was frozen in Las Vegas, Seattle and Denver. Yet, according to one of my sources, "the last class of air marshals graduated from the academy in 2012. The service has not hired any mission-flying FAMs since. In that same time frame, they have promoted or hired over 300 people, and continue to do so, for supervisory and administrative duties. Almost every supervisory position includes a paid move and a yearly salary of $100,000."

Every 9/11, pundits talk about how "everything changed" after the attacks. But the homeland security bureaucracy is as petty, vindictive, wasteful and stupid as ever.