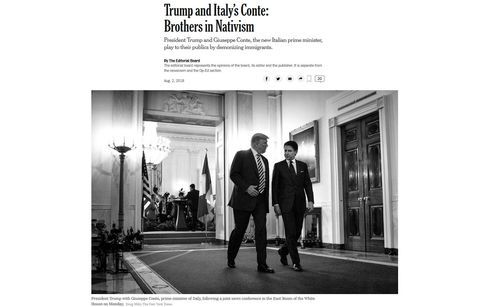 I recently predicted the emergence of Polar Alliance as Ice People recognize their common interest in stopping the Sun People Tsunami. Further evidence of that common interest: 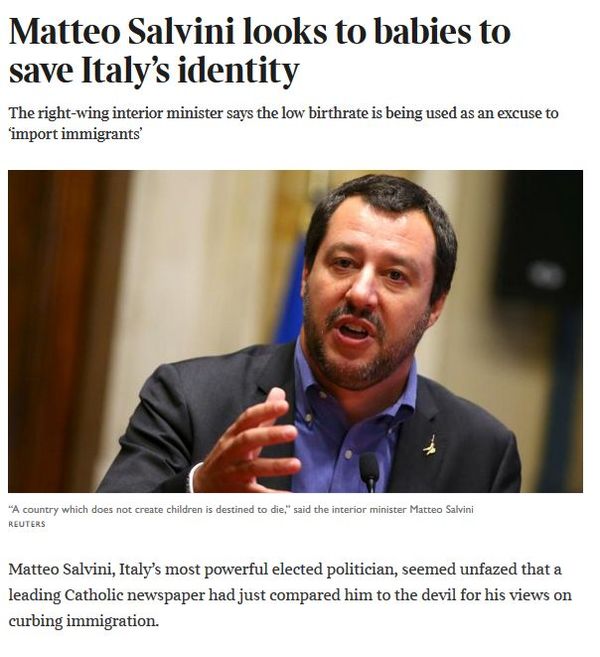 Italy's Prime Minister Giuseppe Conte just visited the U.S.A. and had a meeting with President Trump in the Oval Office. The two leaders got along famously, both agreeing that Western countries need to take a strong line against mass illegal immigration. Even the New York Times editorial board had to acknowledge the harmony, calling the Trump-Conte meeting "a smashing success."

Not that the NYT approved of that. They were in schoolmarm mode, rapping the two national leaders over their knuckles for their hateful hatefulness towards the wretched of the earth:

The love-fest between Mr. Trump and the new Italian government marks another step in the evolving network of right-wing, populist governments in Europe and the United States …[Trump and Italy’s Conte: Brothers in Nativism, August 2, 2018]

That editorial had drawn only three published comments when I last looked. The one with most upticks was from a reader in Texas: "Italy or any country should not have to deal with an influx they can't control or adequately support.” Plain common sense in the New York Times! (If only from a reader). Wonders will never cease.

Giuseppe Conte is actually something of a nonentity, appointed Prime Minister as the person least objectionable to both the two big parties in Italy's governing coalition. The real force behind Italy's nationalism, the guy making all the news: Deputy Prime Minister Matteo Salvini.

In a speech last week, Salvini promised his fellow countrymen he would defend Italy's borders, quote, "with all my energy and all the means at my disposal."

It's a work in progress: almost 2,000 illegals from Africa came ashore in Italy in June. That compares with 24,000 in July two years ago, though, so there is real progress.

Salvini really gets the demographic issue. In an interview with the London Sunday Times, he said he's pushing for social and fiscal policies to raise Italy's birthrate—like the policies Viktor Orbán's put in place in Hungary. [Matteo Salvini looks to babies to save Italy’s identity |The right-wing interior minister says the low birthrate is being used as an excuse to ‘import immigrants’, July 28,  2018]

Lots of luck with that, pal. As explained in my July Diary here at VDARE.com, it seems to be a very difficult thing to raise a country's birthrate by government action.

Bless Signor Salvini for trying anyway. His heart's in the right place—for his own countrymen, against foreign scofflaws. A country can never have too many politicians like that, although a country can, alas, have too few.

Spain had a wee political upset a few weeks ago when the center-right ruling party lost a vote of confidence following a corruption scandal and had to resign. Since then Spain's Prime Minister has been Pedro Sánchez, who is a socialist, leading a coalition of left-wing parties.

Socialism is in the air here in the U.S.A., with Bernie Sanders out campaigning again, young people flocking to join the DSA, Democratic Socialists of America, and that Puerto Rican bimbo winning a Democratic House primary in New York City. So for a glimpse at what socialism might have in store for us should it come to power, Spain offers some clues.

The main thing it has in store, if the Spanish example is anything to go by: Open Borders and great swelling numbers of illegal aliens. With Italy turning back the boats, Spain is now the destination of choice for people-smugglers. In late June Spain actually volunteered to take a boat full of African illegals that Italy had turned away.

The smugglers got the message and now the illegals are pouring in. ['Aquarius Case' Turned Spain Into Magnet For Irregular Migrants – Italian MP, Sputnik, August 1, 2018]One boatload came ashore on a nude beach in late June, generating some fascinating video clips.

Meanwhile a little patch of sovereign territory that Spain owns on the shore of North Africa is under constant siege from illegals trying to get in: In one concentrated assault July 26th, six hundred got over the fence and are now being looked after on Spanish territory. [Hundreds storm border fence into Spain's north Africa enclave of Ceuta, Sam Jones, Guardian, July 26, 2018]

I'm not sure what's going on here or where things are headed. The illegals swarming into Spain are, as those video clips show, almost all healthy young men. Spain's youth unemployment rate is very high for a developed country—currently around 33 percent. The U.S.A. rate, for comparison, is nine percent. So why are the Spaniards cheerfully opening their arms to tens of thousands of illegals—it's been twenty thousand just this year, with fifty thousand currently waiting for a boat in North Africa?[ Europe Needs ‘New Blood’: Spain Expects 50,000 Migrants from North Africa, By Chris Tomlinson, August 1, 2018] Is there an opening here for populists?

I don't know enough about Spanish politics to tell you.

If you cleave to the principle that where politics is concerned, you can never be cynical enough, it might occur to you that these Spanish socialist politicians are just virtue-signaling. Spain's economy is in such poor shape, these young African men won't want to hang round in the country. They'll pass on through to northern Europe, where work is easier to find and benefits more lush. So Spain's politicians get all the virtuous glory, without having to shoulder any of the actual costs. I wouldn't be surprised.

But with nationalism and demographic conservatism rising all over Europe, if Spain's politicians really do plan to just sluice the illegals through to France and Britain, they'd better hurry it up a bit.

As for populism: Well, the Citizens Party looks promising, and their poll numbers have been rising this past few months. If they go full populist, though, they'll hit the same wall as the Sweden Democrats and Geert Wilders' party in Holland: it'll be tough getting other parties to work with them. In countries generally governed by coalitions, that keeps populists out of power.

Still, the Italians got there; and what are Spaniards but just Italians speaking Latin with a lisp instead of hand gestures?

Good luck to the populists in Spain, wherever they are. And may the slow awakening of Europeans speed up, while there is still time to avert demographic catastrophe in the old continent.

Meanwhile, as part of my campaign to improve puns (and literary allusions: Insane in Spain, but hope is never vain.

Over to Asia. Last month I told you about the thousand or so foreign nationals, most from Yemen, who took advantage of a wrinkle in South Korea's visa policy to enter that country as tourists and then apply for refugee status. Here's a follow-up:

The South Korean government has dithered over the issue, but South Korean people have made their opinions known via a petition asking the authorities to tighten up on foreigners claiming refugee status. In just a week the petition drew 350,000 signatures. Over 35,000 Refugees Seek Asylum in Korea, Chosun.com, June 25, 2018] It's now at over 700,000.

That has stirred the government to action. They are promising to do the tightening-up.

Publicity about the Yemenis has also dragged immigration issues to the front of people's awareness. It turns out there are 35,000 foreigners in South Korea with applications for refugee status outstanding. That does not of course include North Koreans, who get South Korean citizenship automatically.

A bad sign: so far as I can judge from English-language South Korean outlets, is that there's a be-nice-to-the-illegals lobby opposing the patriots. It's understandable if you look at Korea's modern history. Many older South Koreans have bitter memories of being refugees themselves.

Of course, practically none of the illegals are genuine refugees, any more than the Central Americans flooding into our country are. But words have power and the R-word has been let loose in South Korea.

Could Northeast Asia, with its prosperity and cratering fertility, go soft on us? Could the Japanese, the Koreans, maybe even the Chinese, turn to Open Borders?

If you'd asked me ten years ago I'd have laughed and said "Impossible!"

Stranger things have happened, though.

More encouraging is news from Markham, Ontario, a suburb of Toronto with a big concentration of Chinese immigrants.

This started when Toronto found it had more illegal aliens than it could find accommodation for. Numbers coming across the border from the U.S.A. have been swelling the past couple of years, and of course they are all claiming to be refugees from something or other.

Canada's rules on claiming asylum and refugee status are even more FUBAR than ours, so numbers have been backing up.

Markham has its own elected mayor, currently a bloke named Frank Scarpitti. The rumor started that Scarpitti had agreed with the mayor of Toronto to take and house five thousand of these illegals.

Once that got around, a demonstration was organized. [Fists fly, and so does a megaphone, as refugee crisis inflames local politics in Toronto area, By Joseph Brean, National Post, July 30, 2018] To judge from videos and press accounts, the demonstrators were all Chinese. There were big signs on display in English, Chinese, and Chinglish. Samples:

Nah, I made that last one up. It was a good spirited gathering, though. There was a counter-protest on behalf of the illegals, carrying signs of their own: REFUGEES WELCOME, NOBODY IS ILLEGAL, and so on. A lot of them were Chinese, too, but there were also round-eyes in evidence on that side. 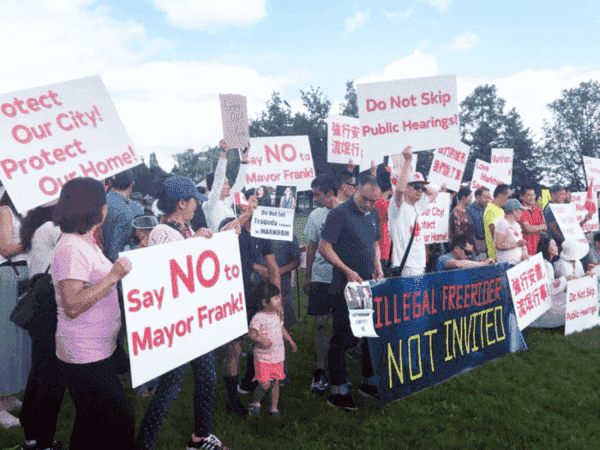 Inevitably there were fisticuffs, but no-one was seriously hurt. I would like to have seen some Chinese martial arts on display, but the most fearsome participant was a young Dragon Lady type with an ear-splitting voice out of Chinese opera, who chased some of the counter-protestors right off the field. (Click here for video.)

The day before [the demonstration] the nomination period had closed on the mayoral election in Markham, in which the incumbent Scarpitti is being challenged by four candidates who signed up at the last minute.

The election is in October, watch this space.

And I'm glad to know that whatever the potential for cuckery among Northeast Asians in Northeast Asia, the cucks are clearly outnumbered by Polar Alliance stalwarts in the Toronto suburbs at any rate.