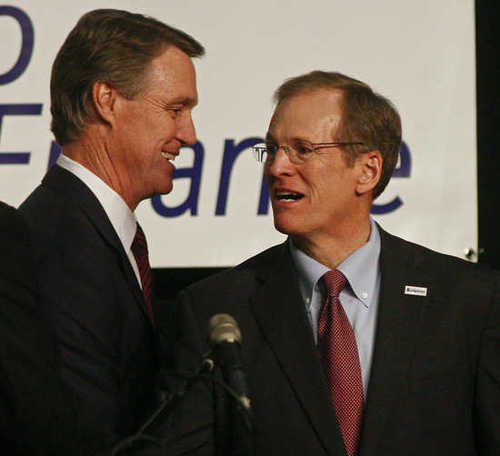 Businessman David Perdue’s victory over Congressman Jack Kingston in the Georgia GOP Senate runoff is being touted as another Tea Party defeat. And most Tea Party and Conservatism Inc. types did indeed support either Reps. Paul Broun and Phil Gingrey or Secretary of State Karen Handel in the primary; then supported Kingston in the runoff. But the real news: the role that Georgia’s immigration patriotism played in the race—and above all, the disastrous backfiring of the U.S. Chamber of Commerce’s endorsement of Kingston, because of its support for Amnesty.

Backed by Newt Gingrich, Steve Forbes, the National Rifle Association, and the Club for Growth, Kingston campaigned to the right of Perdue in the run-off. Reminding voters he had never voted for a tax increase, he slammed Perdue for a statement that increasing tax revenues was a “reality” to get the country “out of the economic ditch.” He also campaigned as “100 percent pro-life” and supporting traditional marriage, while Perdue rarely mentioned social issues.  Big Money, Outsider Image Gave David Perdue Upset in Georgia, July 23, 2014

Gizzi did not mention immigration—although on that issue, Perdue got decisively “to the right” of Kingston.

Both candidates took the same unobjectionable but uninspiring positions that we’ve come to expect in GOP primaries. They both made it clear they were against the Gang Of 8 bill and Amnesty generally. They claimed to support increased border security. But they were otherwise silent. In other words, they tacitly acknowledged the strength of immigration patriotism in Georgia but, either because of stupidity or fear of the donors and the Main Stream Media, they ignored the “Brat Playbook” and did not run on it.

However, what made this race really interesting was that both candidates attacked each other for their ties to corporate America—explicitly and specifically relating those ties to immigration.

Thus Kingston ran an ad stating Perdue “sat on a board promoting amnesty for illegal immigrants, a bill Obama supported.” Kingston was referring to a press release praising the 2006 Amnesty/ Immigration surge bill that appeared on the National Retail Federation’s website, when Perdue was on its board. This attack failed, because Perdue was able to respond that the National Retail Federation was an umbrella of over 100 trade groups and that press release was actually issued by just one of those groups (National Council of Chain Restaurants) so the connection was impossibly tenuous. Perdue was aided by FactCheck.org which called the Kingston ad untrue.

(This is not to say that Perdue should have been in the clear. I spent 15 minutes searching lobbying records and found that the National Retail Federation itself—not just one of its member groups—lobbied for the 2006 amnesty when Perdue was on the board. )

However Kingston didn’t hire me to do his opposition research. And, additionally, he only mentioned immigration as one of many of Perdue’s parade of horribles and the attack did not stick.)

One week before the election, with polls showing Kingston with a sizable lead, Perdue took a populist stand—quite an achievement, give his long corporate career, which included serving as CEO of both Reebok and Dollar Tree, although thankfully he is not related to the Perdue Chicken family—by turning Kingston’s U.S. Chamber of Commerce support into a liability. The Chamber had endorsed Kingston and poured $2.3 million dollars into the race.

The U.S. Chamber of Commerce stands up for American enterprise. We fight for jobs. So why is David Perdue attacking us? Well, he sought our endorsement several times but didn't get it. Now, losing and desperate, David is crying like a little baby. . [U.S. Chamber goes last-minute negative on ‘baby’ David Perdue, By Daniel Malloy, AJC.com, July 21, 2014] ]

Significantly, the Chamber didn’t mention immigration, a tacit acknowledgment that its own positions are not popular with voters.

But Perdue had preempted this attack, by walking out of his last meeting with the Chamber. He told reporters they demanded he agree to “vote for us 100 percent of the time" and he responded he wanted to "represent my constituents instead." [The day David Perdue walked out on the U.S. Chamber,By Greg Bluestein and Daniel Malloy, AJC.com, July 16th, 2014] Perdue’s implication: the Chamber demanded he support Amnesty and he refused.

(Actually, I doubt this is the case. The Chamber often supports anti-Amnesty candidates. For example, they’ve given money to Jeff Sessions, Allen West, and David Vitter.)

The Wall Street Journal’s immigration enthusiast Jason Riley spluttered that Perdue was in effect a class traitor, arguing that “a former executive at both Reebok and Dollar General, surely understands” that “the Chamber of Commerce want legal workers, not illegal workers” and that “despite the fact that there are millions of American who are unemployed or under-employed, labor shortages remain in certain sectors, such at agriculture and hospitality.” .” [Perdue vs. Kingston vs. Immigration Reform, July 21, 2014]

Riley concluded that Perdue’s “willingness to pretend otherwise in a primary race may tell Georgia voters something about what kind of senator he'd make.”

Maybe one who listens to his constituents?

But Kingston supporter Eric Erickson of RedState conceded that the Kingston lost “largely because David Perdue made Kingston own his Chamber of Commerce endorsement.” And many of the news articles on Perdue’s victory discuss the anti-Chamber ads as a possible deciding factor, for example Outsider beats insider in GOP primary runoff in key Senate race, By Paul Steinhauser, CNN, July 22, 2014

Does this mean Perdue will become the next Jeff Sessions? Possibly, but of course I wouldn’t bet on it. His attacks on the Chamber were likely sour grapes, and his association with the National Retail Foundation shows he is not averse to working with pro-amnesty business groups. Perdue did gave the right answer to all of Numbers USA’s questions, including reducing legal immigration and ending birthright citizenship, yet he never mentioned those issues during the campaign and told a tech lobbying group that he supported H-1B visas, although he made it clear that it should not be used as part of a larger Amnesty bill. [Technology Association of Georgia Senate Survey: David Perdue (R)]

Moreover, there have been plenty of candidates who have said great things in Republican primaries about immigration who ended up supporting Amnesty.

Immigration patriots should keep an eye on Perdue and punish him if he ends up breaking his anti-Amnesty promises.

One early test: whether he uses the issue against Democratic nominee Michelle Nunn, an Al Gore-type faux Southerner with strong Liberal Establishment ties.

But the big news is that immigration matters in Georgia—and that, whether Perdue was genuine or not, he successfully turned the Chamber’s support into a liability because of its support for Amnesty.

Still the Chamber of Commerce’s negative influence on the GOP and upon the immigration issue cannot be overstated. A quick search shows that VDARE.com has 360 items making this point, going back to the year 2000..

Perdue’s victory shows that GOP voters have gotten the message.