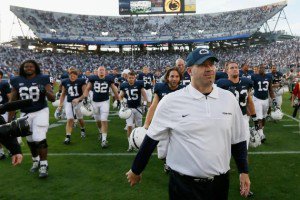 [Although Penn State’s Nittany Lions aren’t “aren't bowl—or postseason—eligible” because of NCAA sanctions, they’re playing traditional rivals the Fighting Illini—who publicly offered to recruit deserting Penn State players—this weekend. The team you see above is much whiter than average in top-class college football. Time will tell if this is an advantage or a disadvantage. But for a university dealing with the legacy of sex crimes, it’s a lot safer.]

Right after the Freeh Report [PDF] detailed how “a culture of reverence for the football program” permeated Penn State and enabled now-convicted child rapist/predator Jerry Sandusky, ultimately destroying the legacy of Coach Joe Paterno, I argued with a mix of hyperbole and disgust that “College football should be banned.”

The naive might have thought the university would indeed drop its football program. The NCAA, the governing body of collegiate athletics, imposed a $60 million fine on Penn State and banned the football team from playing in the post-season. In an Orwellian move, the school vacated football wins since the Sandusky cover-up began, meaning that Paterno lost his spot atop the list of all-time wins as a head coach in Division I (FBS) football, and also removed his statue from outside the football stadium.

But never underestimate the power of the Opiate of America. Forbes magazine valued Penn State’s football program at $100 million in 2011, with the program generating a $53 million profit. Dropping football was never an option at Penn State.

The NCAA was nice enough to offer every member of the team the chance to transfer to another program without sitting out the year normally required of all athletes who transfer. Prominent among those who fled Happy Valley: black running back Silas Redd, whose goal of landing an NFL contract probably supersedes that of attaining a college degree.

Additionally, the new coaches of Penn State can no longer recruit the top high school athletes with promises of playing for a Big Ten or national title, or an appearance in a Bowl Championship Series (BCS) game.

Ironically, however, this means an important opportunity has appeared to address what I have argued is the “inefficient market” in football recruiting: the systematic undervaluation  of white athletes. (These inefficiencies do occur in sports: another one is documented in Michael Lewis’s book MoneyBall).

This anti-white discrimination from college recruiters has been documented anecdotally for years. Tom Lemming, the pioneer of high school evaluation  has stressed that there are hundreds of capable white athletes being passed over because of the stigma attached to their abilities. [What college coaches don't talk about, by Taylor Bell, Chicago Sun-Times, October 1, 2009]

One example: Fred Bacco told the Pittsburgh Post-Gazette that recruiters informed him he was the “wrong color” to play running back. [Recruiting: Hopewell LB follows family tradition to BYU, January 27, 2004]

Another white high school running back sensation from the Pittsburgh area, Trent Wissner, told the Pittsburgh Post-Gazette’s Mark Madden a similar story. [Plenty of talent, but too white, January 2, 1999]

A case from this summer: Rex Burkhead, the white Nebraska Cornhuskers running back:

[Nebraska coach Bo] Pelini can be very opinionated. He was in that type of mood Friday. He knows and we know why Burkhead gets tagged a "throwback player" and "overachiever," but we typically bite our tongue.

Pelini let loose with the truth.

In Pelini’s opinion, Burkhead gets overlooked nationally. He said it doesn’t bother him. It does surprise him, though.

Now, Penn State is in a position where four or five star recruits, designated as such by online recruiting services like Rival or Scout.com, will pass on the school. It will have to rely on lower-rated players. White players.

Brennan Franklin, a linebacker with scholarship offers this past winter from the likes of Wofford College, Eastern Kentucky and Robert Morris, leaves home Friday for State College, Pa., a journey that casts him as a symbolic figure in the worst college football scandal ever.

For however great an impact Franklin makes at Penn State, history likely will remember him as the program's first new piece after the July 23 announcement of devastating sanctions that include the loss of 40 scholarships and a four-year postseason ban.

Less than three weeks ago, Franklin was just another kid from Peoria, Ariz., who slipped through the cracks in recruiting.

Today, he represents the near future at Penn State, built upon hope that coach Bill O'Brien can find enough overlooked but enthusiastic players to plow through difficult times and minimize the effects of NCAA-imposed probation.

"I just want to play," Franklin said. "People say they might be doing this for publicity. They're not. And I'm going out there to do everything I can to become a starter within the next year."

This addition of one more body to Penn State's class of incoming freshmen illustrates the creativity necessary for it to stay afloat between now and 2016. And the more prospects like Franklin it can uncover, the better for Penn State — because an attitude like his might just turn contagious.

With his head down and shoulders square on his bruising 6-foot-1 frame, running back Michael Zordich can strike an imposing pose before he collides with a defender. The brown hair hanging out of his white helmet just adds to the look of intimidation.

Penn State's new-look passing game might get all the attention, but Zordich's emergence on the ground has added another threat to the rushing attack. His hard-nosed running style epitomizes the blue-collar mentality espoused by the team's senior leaders in the first year of coach Bill O'Brien's rebuilding project in Happy Valley.

"You know that every game you have something to play for. With no bowl game to play for or championship ... every Saturday is our time when we get out there," Zordich said after a 24-13 victory Saturday over Temple evened Penn State's record at 2-2.

The Nittany Lions travel to Illinois next weekend to open Big Ten play.

"At this point, we're just playing for the guys that four years from now will be able to compete" in the postseason, Zordich said….

Next man up against the Owls? Another bruiser in the Zordich mold in 6-foot-1, 232-pound sophomore Zach Zwinak, who also had career highs of 18 carries for 94 yards against Temple's porous defense.

Both Zwinak and Zordich are white. White running backs. But unlike Wissner and Bacco, they got their shot to run the ball for a major college football team.

And that shot can mean everything. See Unheralded Iowa walk-on Mark Weisman steps in as lead running back, AP, September 19, 2012.

No matter how much of the history of Penn State football is wiped away, the Sandusky scandal will remain.

But a new identity can be forged—one that stresses actually recruiting student-athletes who have a desire to both play for and graduate from Penn State. That exploits inefficiencies in the meat market that is the evaluation of high school football talent, and builds a winner out of players that other schools would pass up on out of prejudice.

Yes, football is the opiate of America. But what if one major program dared recruit players that other schools pass over and wins with them by building a program that stresses team unity over individual flamboyance?

Penn State alumni, students and fans would have a program to be proud of. And an evaluation system that has denied white high school athletes the chance to succeed will have taken a serious hit.

Paul Kersey[Email him] is the author of the blog SBPDL, and has published the books SBPDL Year One, Hollywood in Blackface andEscape From Detroit, and Opiate of America: College Football in Black and White