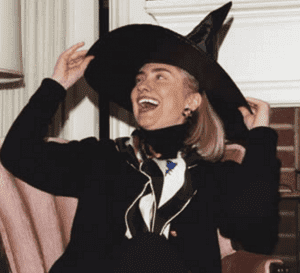 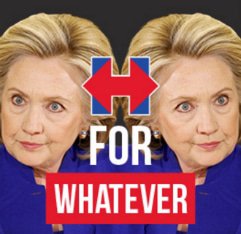 When it comes to immigration policy, Hillary Clinton’s had more career costume changes than her new BFF Katy Perry.

This week, Clinton donned her militant, pro-illegal immigration mask and vowed to out-executive amnesty her old pals at the White House. “I will go as far as I can, even beyond President Obama,” she bragged, “to make sure law-abiding, decent, hard-working people in this country are not ripped away from their families.”

The millions of “law-abiding” people she’s talking about legalizing, of course, are law-breaking border crossers, visa overstayers, document fraudsters and deportation fugitives who chose on their own to rip their families apart.

But hey, let’s not get bogged down in small details.

As her more “progressive” 2016 challengers breathe down her neck, the perpetually transmogrifying Clinton has done everything but change her name to “Hilaria” and don an “Aztlan Nation” T-shirt to lock up the Latino vote.

During one of her umpteenth campaign reboots this summer, she hired a 26-year-old illegal immigrant “DREAMer” named Lorella Praeli to conduct “outreach to the Latino community.” She trumpeted her “comprehensive immigration reform” plan before the ethnic radicals of the National Council of La Raza (“The Race.”) And she crusaded last week for opening up Obamacare exchanges (which continue to crumble across the country under the weight of skyrocketing costs) to untold legions of immigrants here illegally.

Election-year conversions are nothing new. But Clinton’s immigration path contains more switchbacks than a Colorado mountain road. One season she’s a bleeding-heart Mechista. The next, she’s channeling her inner Pat Buchanan with sound bites that would make a Trump loyalist cheer. “A country that cannot control its borders is failing at one of its fundamental obligations,” she thundered many moons ago. “I am, you know, adamantly against illegal immigrants,” she asserted in 2003.

But that was then. This is now. Like Forrest Gump’s box of chocolates, you never know what yer gonna get with Transformer Hillary.

After the horrific murder of San Francisco’s Kate Steinle by a serial criminal alien who had been deported multiple times, Clinton disavowed sanctuary policies and stated she had “absolutely no support for a city” that looked the other way. Almost immediately, a campaign spokeswoman named Xochitl Hinojosa clarified that her boss believed sanctuary cities can “enhance public safety” and supported more amnesty (that is, more illegal immigration) to cure the bloody consequences of unfettered illegal immigration.

Before Clinton was for driver’s licenses for aliens here illegally, she was sorta-kinda against them. Her slippery straddling evoked mockery among her Democratic presidential rivals in 2007, when she was asked during a debate whether she supported then-New York Democratic Gov. Eliot Spitzer’s licensing scheme.

“Well, what Governor Spitzer is trying to do is fill the vacuum left by the failure of this administration to bring about comprehensive immigration reform,” she babbled. After Sen. Chris Dodd, D-Conn., unequivocally stated that “a license is a privilege and that ought not to be extended” to law-breakers, she protested that “she did not say that it should be done, but I certainly recognize what Governor Spitzer is trying to do.”

Sen. John Edwards, D-N.C., jibed, “Unless I missed something, Senator Clinton said two different things in the course of about two minutes, just a few minutes ago.” Then-Sen. Barack Obama, D-Ill., declared that he “was confused on Senator Clinton’s answer. I can’t tell whether she was for it or against it.”

Cynical birds of a feather flip-flop together. In 2006, both Obama and Clinton voted for the Secure Fence Act, which in theory mandated construction of a 700-mile barrier along the southern border. Barely two years later, both Democratic presidential rivals renounced their support after Texas special interests complained about the inconvenience to the “community” and open-borders activists whined about onerous passport requirements.

(The grand irony is that the Secure Fence Act was a bipartisan ruse all along — a Kabuki gesture from the “immigration reform” illusionists in both parties that was purposely underfunded, slow-walked, and sabotaged by Bush administration bureaucrats and cronies.)

“You know where I stand” on immigration, Clinton is telling voters. But she doesn’t stand so much as she slithers from one expedient position to another and back in order to mollify Big Business and identity politics racketeers. Rest assured: The one role she’ll never play convincingly is that of truth-telling defender of “law-abiding, decent, hard-working” citizens who believe in putting American sovereignty and American interests first.