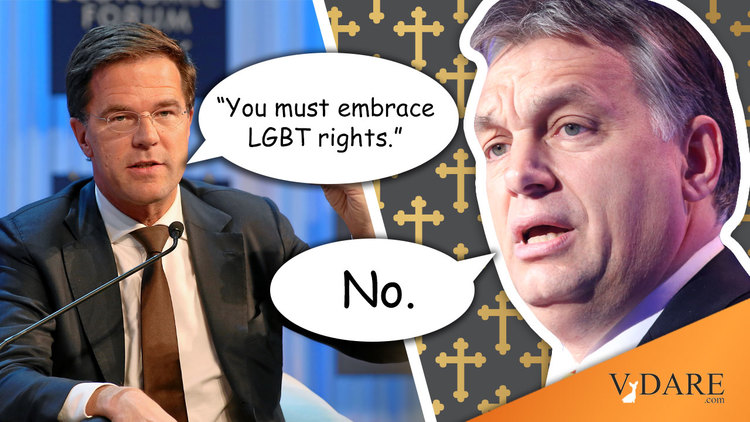 Respect LBGT rights or get out of the EU, Dutch Prime Minister Mark Rutte instructed Hungary's Viktor Orban at last week's gathering of the European Union in Brussels.

According to Reuters, attendees described it as the "most intense personal clash among the bloc's leaders in years."

What caused the clash?

Hungary just passed a law that bans schools from using materials seen as pro-homosexuality. According to the AP, the new law "prohibits sharing content on homosexuality or sex reassignment to people under 18 in school sex education programs, films or advertisements."

Rutte eagerly related details of his confrontation with Orban: "It was really forceful, a deep feeling that this could not be. It was about our values; this is what we stand for."

"I said, 'Stop this; you must withdraw the law, and if you don't like that and really say that the European values are not your values, then you must think about whether to remain in the European Union.'"

Orban calls himself a freedom fighter and defender of traditional Catholic values who believes in democracy but not liberalism: "The Hungarian nation is not a mere pile of individuals."

Almost everyone apparently came down hard on Orban.

European Council President Charles Michel reminded Orban "that values such as freedom, tolerance and human dignity are at the heart of the EU."

Several EU member states signed a letter declaring: "Respect and tolerance are at the core of the European project. We are committed to carry on with this effort, making sure that future European generations grow up in an atmosphere of equality and respect."

The issues raised by this confrontation are many.

First, those who warned in the 1960s that the EU, which began as a European Coal and Steel Community, a French-German free-trade zone of six nations, would inevitably evolve and expand into a transnational regime that would seek to impose its "values" on its members have been proven right.

And what are "EU values"? Who declares them; who defines them?

Christian teachings have a pedigree that goes back millennia.

But what is the source of moral authority for modernity's doctrine that homosexuality is moral, other than some transient ideology, which Russell Kirk reminded us is political religion?

What is the source of the morality that teaches same-sex unions are the equal of traditional marriage and any government that does not agree is a bigoted regime with which we ought not associate?

For the stand the EU takes today—that homosexuality is natural and normal and should be morally and legally the equal to other forms of sexual expression—flatly contradicts those Christian beliefs and values that Europe itself reflected at the EU's infancy.

Do values change? Or are people simply converted to new faiths, new beliefs, new ideas and new "values" that contradict the old ones that were taught and believed for centuries?

If tolerance is, as Michel declares, an EU value, is the canopy of tolerance not wide enough, and the big tent of tolerance not large enough, to include the Christian values Orban espouses, though they contradict the EU values that Rutte and others declare?

Is not Hungary being subjected to EU discrimination for the moral offense of holding on to beliefs that differ from the new EU consensus?

Is the EU's liberalism so intolerant of dissent it would expel an EU member who does not embrace its 21st-century teachings on LGBT rights?

Not until this century in the USA was homosexuality declared a constitutional right. Justice Antonin Scalia famously dissented from that decision.

And if Hungary holds to ideas and beliefs Scalia held, and tens of millions of Americans still hold, but is forced out of the EU for so doing, why would we Americans not stand behind Hungary's right to dissent?

American values, once declared to be freedom, liberty and independence, have evolved into inclusiveness, diversity and tolerance.

Which brings us to the cancel culture.

Where is the tolerance here for differences of belief about whether homosexuality is moral? Cannot those who reject newly established opinion still be included in the company of decent men? Or do the values of inclusion and diversity not extend that far?

Why should disbelievers in the moral equality of homosexuality be excluded from the circle of decent men?

We're getting close here to what cancel culture is all about.

Are future European generations to be taught that the Christian position on homosexuality was backward, bigoted and hateful and that its abandonment marked a major step in human progress?

If the Hungarian people and nation find that EU values conflict with their Catholic and Hungarian values, they should declare their independence of the EU as anything other than a trading bloc.