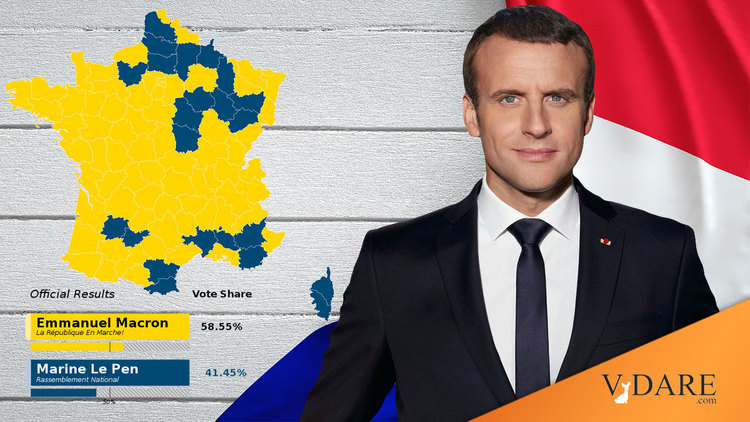 So wrote William Butler Yeats in the wake of the Great War of 1914-1918 that had ravaged the Christian civilization he had known.

In France on Sunday, the center held, as President Emmanuel Macron rolled up a crushing 59% to 41% victory in the runoff election against ethno-nationalist Marine Le Pen.

Four years ago, Le Pen got 34% in the runoff. And the highest vote that her father, Jean-Marie Le Pen, founder of the National Front, ever received was 18%. While Marine Le Pen lost Sunday, her positions continue to attract converts.

So terrified of Le Pen was the European establishment that before Sunday's election, the leaders of Spain, Portugal and Germany intervened in France's politics by imploring the French people to vote against her.

This runoff is "for us, not an election like any other," wrote German Chancellor Olaf Scholz, Portuguese Prime Minister Antonio Costa and Spanish Premier Pedro Sanchez in Le Monde.

France faces a "choice between a democratic candidate ... and a far-right candidate, who openly sides with those who attack our freedom and our democracy."

More than 4 in 10 French voted for the candidate the E.U. leaders had described as anti-democratic.

In the first round of voting, Le Pen, along with rabid leftist Jean-Luc Melenchon and the hard right's Eric Zemmour, who ran third and fourth, behind Le Pen, together carried 52%.

Thus did three of the top four candidates for the presidency of France, and a majority of the French nation, show support for an idea that all three of them shared—hostility to NATO.

In ruling France for the next five years, Macron, himself a critic of U.S. leadership and NATO, will have to keep this constituency in mind.

And Macron knows it. On his night of triumph, he conceded that many of those who voted for him were motivated not by an appreciation of what he had accomplished, but by a fear of Le Pen.

In the East of Europe, however, change may be on the horizon.

Major media—Newsweek, the New York Post and Daily Mail—are reporting rumors, based partly on recent videos of Russia's president, that Vladimir Putin may be suffering from cancer.

Also, news that Sweden and Finland may be joining NATO as the 31st and 32nd members of the alliance has caused a sharp reaction from Moscow, which is warning of a redeployment of nuclear weapons to the Baltic.

Again, have people thought through what it would mean to bring Finland, a nation the size of Germany with an 830-mile land border with Russia, into NATO?

With 4% of Russia's population, Finland would need NATO ground troops to man the border bases and crossing points into that country, and some of those troops would likely have to be Americans.

They would be staring across that chilly border directly at Russians, as in East and West Berlin in Cold War days.

Last Friday, in a press conference, Gen. Rustam Minnekayev said Russia seeks full control of all of southern Ukraine to give it "another way out to Transnistria"—the breakaway state internationally recognized as part of Moldova.

Minnekayev charged Moldova with oppressing the Russian-speaking population of Transnistria, an echo of the claim the Kremlin used to justify the invasion of Ukraine.

Was this weekend's missile attack on Odessa an indicator of that Russian intent?

Putin's ally in Belarus, Alexander Lukashenko, in his sixth term, having held the top office for three decades, is now 68, and his last election victory in 2020 was almost universally regarded as fraudulent.

Would Moscow, having lost Ukraine, sit still as Sweden and Finland moved onto the threshold of NATO and accept a neutrality for Belarus that would leave Russia without two of the three critical components of his Russian Federation as allies?

China's largest city, Shanghai, is today in a lockdown ordered by Xi Jinping, as China suddenly seems no longer the country that showed the world how to cope with the COVID-19 pandemic that began in Wuhan.

President Joe Biden may be making trips to New Hampshire, but few believe he will be running again in 2024, as the manifestations of his cognitive decline appear more frequent and disturbing.

Woodrow Wilson suffered an incapacitating stroke during a national tour to sell the peace treaty and League of Nations he had negotiated at Paris to the country and the Senate in 1919, yet survived his successor Warren Harding, who died in office in 1923.

As Macron was rolling up his election victory, Ron Klain, Biden's White House chief of staff, chortled at the outcome.

"An interesting observation, just FYI," tweeted Klain. "President Macron appears to have secured a double-digit victory over LePen, at a time when his approval rating is 36%. Hmmm ... "

If Macron can pull it off, why can't Biden, Klain is contending here.