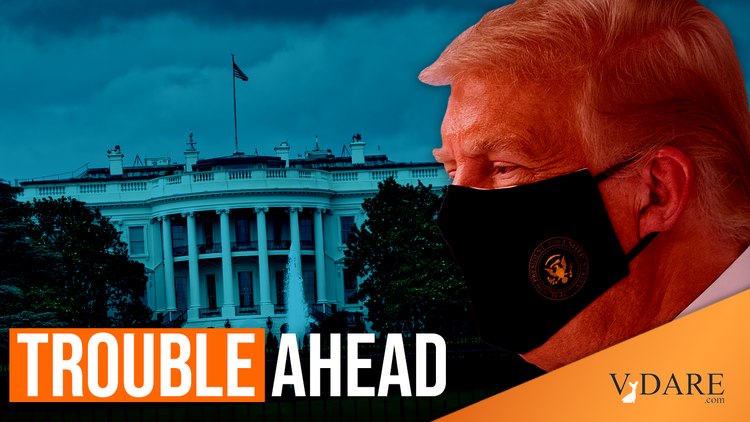 What a difference a week can make.

Saturday, Sept. 26, was among the best days of the Trump presidency, or so some of us thought watching the president introduce in the Rose Garden his sterling candidate for Ruth Bader Ginsburg's seat on the Supreme Court.

The academic and professional credentials of Amy Coney Barrett, 48, a U.S. appeals court judge, were superb. Moreover, she was a devout Catholic and mother of seven, two of whom were adoptees from Haiti.

From every standpoint, a 10-strike for Donald Trump.

Ahead was the Tuesday debate, the first of three with Joe Biden, and the long-awaited opportunity to expose Sleepy Joe's visible loss of mental and verbal acuity in the four years since he was vice president.

Sunday, however, The New York Times detonated a bomb directly beneath the Trump campaign. Declaring that it had Trump's tax returns, the Times story blared:

"Donald J. Trump paid $750 in federal income taxes the year he won the presidency. In his first year in the White House, he paid another $750. He had paid no income taxes at all in 10 of the previous 15 years—largely because he reported losing much more money than he made."

Far from being a billionaire, the Times said, Trump was mired in debt with hundreds of millions of dollars in loans coming due in 2021.

Suddenly, Trump was on the defensive. And in the Cleveland debate, he began a series of accusations and insults that lasted 90 minutes. The debate was widely declared the worst in U.S. presidential history.

Moderator Chris Wallace and the media agreed that the descent into chaos was caused by the endless interruptions of Trump.

Believing he accomplished what he had come to do, Trump headed out for the friendly country of Minnesota's Iron Range. On the return trip on Air Force One, Hope Hicks, feeling unwell, was quarantined.

She later tested positive for COVID-19.

At 1 a.m. Friday, came word came that both the president and first lady had tested positive. By evening, Marine One was transporting Trump from the White House to Walter Reed hospital in Bethesda.

Saturday came the doctors' report that the president was doing well, followed by chief of staff Mark Meadows' backgrounder suggesting that Trump's situation had been more serious than the country knew.

Came then news that some of Trump's guests at the Rose Garden ceremony had tested positive: campaign manager Bill Stepien, Governor Chris Christie of his debate prep team, Kellyanne Conway, and Sens. Mike Lee of Utah and Thom Tillis of North Carolina, both of the Senate Judiciary Committee that will vote on Judge Barrett.

Sunday, with a crowd in front of Walter Reed loudly cheering for him, Trump commandeered an SUV and ordered it to drive by his followers so he could wave to them. In the front seat of the SUV, in masks and protective gear, were Trump's Secret Service agents.

The cumulative impact of these 10 days has been distracting at best and dreadful at worst. And the pressure from Trump, to get back to the White House and the campaign, suggests this is his take as well.

The coronavirus and how he has handled it, the contraction of COVID-19 and how Trump got infected, his prior mockery of masks and ridicule of many who wear them, the specter of thousands of maskless Trumpsters at MAGA rallies—all are now the stuff of front-page news and back-page commentary.

The nation tends to respond sympathetically when the president faces a life-threatening situation. It did so to Ike's heart attack in 1955, and to Reagan after he was shot at the Washington Hilton by John Hinckley and then had colon cancer surgery early in his second term.

But Trump may have forfeited some of that sympathy by his mocking the wearing of masks.

On the weekend after the Trump-Biden debate, a Wall Street Journal poll found that Trump had fallen 14 points behind Biden, and, in an average of national polls, Biden now led him by 8 points.

Trump has four weeks to turn it around. And his task, while easy to describe, is not so easy to accomplish. He needs to persuade undecided and soft Biden voters that Joe is simply not up to the job of president.

Assuming he is well enough to campaign as he used to, Trump has to convince the country that Joe Biden is too big a risk to take. He has two more debates to do what he failed to do in the first debate.

Wednesday will be Mike Pence's opportunity, in his debate with Kamala Harris, to show that Trump made the right call in choosing him.

He can pay back the favor by exposing the radicalism of the people and policies Joe Biden would bring with him into the White House.