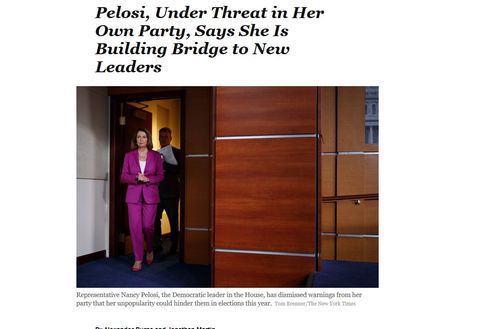 Nancy Pelosi, a High-Ranking Becky, Is Under Fire

The New York Times gets around to one of my recent topics:

Pelosi, Under Threat in Her Own Party, Says She Is Building Bridge to New Leaders

Nancy Pelosi is girding for a mortal challenge to her leadership of the Democratic Party after the November elections or even sooner, and in a signal of reassurance to anxious lawmakers says that she is deliberately building a “bridge” to a new generation of party leaders.

… The most perilous threat to Ms. Pelosi, for the moment, may be the impatient mood in the Congressional Black Caucus, where senior legislators have begun arguing that it is past time to elect an African-American speaker. Black lawmakers and candidates, furious about President Trump’s caustic racial politics and attacks on African-Americans, say they are determined to claim a greater role in steering their party.

The Democrats are their party.

… She is the party’s most formidable fund-raiser, and her aides say she has sturdy support from a majority of House Democrats who credit her with ushering in the policies on health care and business regulation that Republicans have attacked.

… But this weekend her imposing stature as a party leader will be on vivid display: She is gathering her financial network in Napa Valley for a conference with party luminaries like Gov. Jerry Brown of California and John F. Kerry, the former secretary of state. …

Ms. Pelosi’s fiercest supporters view much of the criticism directed at her, from both Republicans and Democrats, as anchored in bias against her gender or age.

… A diverse group of several dozen Democratic candidates, across all regions and ideological factions, have pledged to demand new leadership if they are elected.

Many of the dissenters are younger Democrats, including some prominent candidates of color who are likely to join the freshman class …