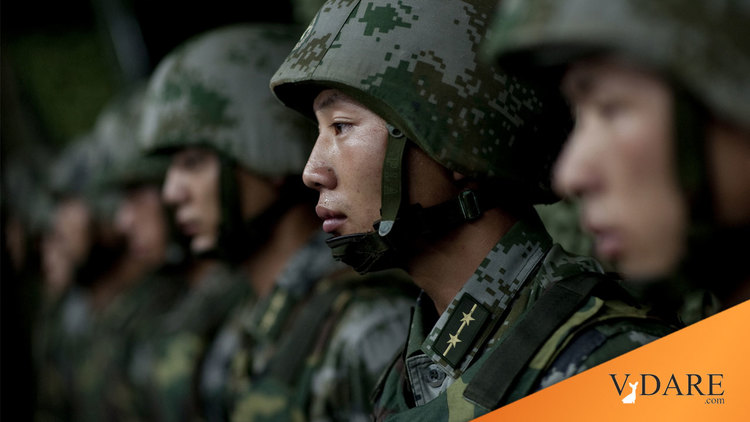 Patrick J. Buchanan: Russia Is Not The Great Rival; China Is

And what are the relevant facts in this crisis where 100,000 Russian troops are now stationed along the Ukrainian border?

Fact one: There is not now and never has been a vital U.S. interest in Ukraine to justify risking a war with Russia.

History tells us that. Even as Ukraine was suffering in the Stalin-induced Holodomor, the terror-famine of 1932-33, President Franklin Roosevelt granted diplomatic recognition to the Bolshevik regime.

During four decades of Cold War, the U.S. never regarded Moscow's control of Ukraine as any threat to the USA.

President Joe Biden was thus right to rule out military action in response to any Russian incursion or invasion of Ukraine.

Moreover, as it is declared U.S. policy not to retaliate militarily to an invasion of Ukraine, Biden should make it clear that Ukrainian membership in NATO is a closed question.

Not going to happen.

Ukraine is not going to be invited to join NATO and be given Article 5 U.S. war guarantees that are the primary benefit of membership.

Hence, with U.S. negotiations with Moscow over Ukraine impending, what is the state of play?

Russia is demanding that the U.S. give formal assurances that Ukraine and Georgia will never be admitted to NATO, and no nation bordering Russia will ever accept offensive NATO weapons that could imperil Russia's security.

If Moscow cannot get such assurances that Ukraine will never become a member of NATO, Russian President Vladimir Putin warns, Russia may invade and occupy Ukraine to neutralize that threat.

While we will not resist Russia militarily, the most severe sanctions in history will be imposed on Russia, possibly including cancellation of the Nord Stream 2 gas pipeline from Russia to Germany.

Putin has lately issued a counterthreat.

If such severe sanctions are imposed on Russia, this will result in a "complete rupture of relations" and be a blunder "which our descendants will later appreciate as a huge one."

Not long ago, a total severing of relations was the prelude to war.

While Putin and Russia initiated this crisis with the deployment of 100,000 troops to Ukraine's borders, we should try to see this crisis through Putin's eyes.

The heart of Greater Russia as one ethnic, cultural and historic nation consists not only of Russia but also of Belarus and Ukraine.

Yet, consider the political condition of that core nation today.

Ukraine has broken from Moscow and seeks its future in the West, the EU and NATO.

Belarus, a nation of 10 million, just went through an election where only fraud guaranteed victory for its 67-year-old autocrat, Alexander Lukashenko, who has ruled Belarus for a quarter-century.

Though an ally of Putin, Lukashenko is not the future.

And Putin himself, while popular, has been in power for two decades and is bedeviled by rising democratic resistance in Russia.

Now the Americans—who have, in a quarter-century, moved NATO across Germany into Eastern Europe and the Baltic states—are planning to bring into an alliance established to contain Russia the former Soviet republics of Georgia and Ukraine.

Putin has to see himself as the ruler of a diminishing Russia, not a rising power.

Time is not on Russia's side or Putin's side.

His principal ally, China, has 10 times the population of Russia and an economy 10 times Putin's. Moreover, China harbors ancestral claims to Russian territory in the Far East, which, in 1969, caused a border clash between the two countries.

Putin has decided that the long retreat of Russian power must end, that the eastward march of a NATO alliance created to contain and resist Russia must end, and if this means risking war over Ukraine, so be it.

Putin may see this as a now-or-never moment to halt the decades-long attrition of Russian territorial and national power.

Historically, those presidents who refused to use force in Central or Eastern Europe, to avoid a war with Russia where U.S. vital interests were not imperiled, were proven right.

Our great challenge in the 21st century is not Russia.

Indeed, in the long term, we want Russia on our side in the long struggle between the U.S. and the West, and Communist China.

What the U.S. should do in this Ukrainian crisis is to avoid a war with Russia, avoid an escalation, and leave our adversary with an honorable avenue of retreat. Again, with Russia, time is on our side.