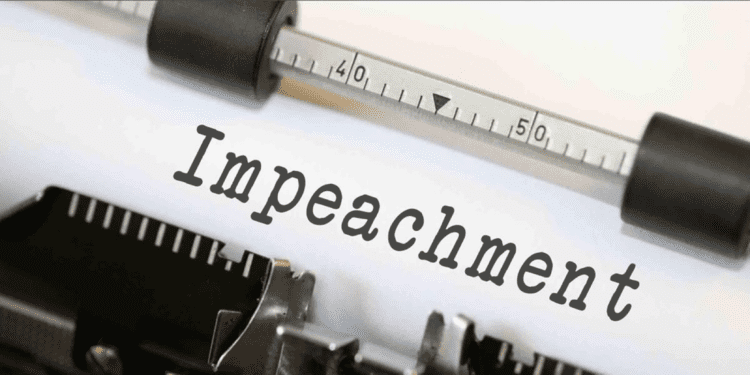 Patrick J. Buchanan On Impeachment: Where Are the 'High Crimes'?

Earlier: VDARE.com’s Peter Brimelow On Impeachment: Democrats Huff And Puff—YAWN! Wake Up When Senate Trial Begins. Then Lock And Load.

"Quid pro quo" was the accusatory Latin phrase most often used to describe President Donald Trump's July 25 phone call asking for a "favor" from the president of Ukraine.

Article II is titled "Obstruction of Congress." What does it allege?

That Trump "directed the unprecedented, categorical, and indiscriminate defiance of subpoenas issued by the House of Representatives pursuant to its 'sole power of Impeachment.'"

Undeniably, there is truth here.

Trump did direct the Executive branch not to provide witnesses and documents subpoenaed by the House Intelligence and Judiciary Committees, both of which are partisan, pro-impeachment and chaired by unapologetic Trump-haters Jerrold Nadler and Adam Schiff.

But what the substance of Article II is really about is the eternal conflict between the first and second branches of the government over their respective rights and powers.

Such clashes are usually decided by the third branch, the Supreme Court. But Pelosi, Nadler and Schiff are unwilling to wait for the court to decide. They are declaring the issue decided and settled in the House's favor, and treating Trump's recourse to the courts as a new impeachable offense: "Obstruction of Congress."

Can Pelosi seriously expect a Republican Senate to convict and remove a Republican president for defending what that president is claiming in open court are the constitutional rights of the Executive Branch that he, as its present occupant and leader, is obligated to defend?

Trump would be derelict in his duty if he allowed a rogue House to run roughshod over the White House.

Consider Article I, "Abuse of Power."

The heart of this charge is that Trump briefly held up delivery of $391 million in "vital military and security assistance to oppose Russian aggression." So doing, Trump "compromised the national security of the United States."

Is the House serious? It was the Trump administration that began the transfer of the lethal aid—sniper rifles, Javelin missiles—that President Barack Obama had denied to Ukraine for three years.

Still, it is absurd to declare U.S. national security as threatened by a Russian presence in Crimea or in the Russian-speaking Donbass.

Russia has been in Crimea since Catherine the Great's reign in the 18th century. When FDR visited Yalta in Crimea in 1945, and when Richard Nixon visited Crimea during his 1974 summit, Ukraine was a Soviet republic ruled from Moscow.

When did a Russian presence or Russian flag flying over Crimea or Luhansk and Donetsk become a threat to U.S. national security?

Soon after the victory of Lenin's revolution, and from then, for seven decades, to the end of the Cold War, Ukraine was one of 15 Soviet republics.

When did Ukraine's territorial borders become a U.S. vital interest?

George H. W. Bush in 1991 implored the Ukrainians not to indulge a "suicidal nationalism" by declaring independence. Stay with Russia, said Bush. Was Bush 41 committing an impeachable act and imperiling U.S. national security?

Under the Constitution, a president shall be impeached and removed on conviction by the Senate of "Treason, Bribery, or other high Crimes and Misdemeanors."

During the years of the Mueller investigation, Trump was accused of "treason," of being a Kremlin ally and asset.

With Trump, said Pelosi, "All roads lead to Putin!"

Yet nowhere in the articles of impeachment is "treason" mentioned. Nor is "bribery" or "extortion," the other crimes alleged. Where are the "high crimes" in this impeachment resolution? There are none.

Were the Democrats demagoguing? Did they have nothing to back up the charges of criminal conduct? Were the charges just designed to smear Trump, whom Democrats fear they cannot defeat in 2020?

Trump's offense is that he asked Ukraine's president to investigate the Bidens and Burisma Holdings, which paid son Hunter Biden $50,000 a month while Vice President Joe was the White House point man for rooting out corruption in Ukraine.

But if Trump had no justification for his suspicions about Joe and Hunter, why is the press corps traveling with candidate Biden demanding more answers than Joe seems prepared to give?

And is it truly impeachable to ask Ukraine's president to look into the smelly Biden-Burisma deal before being awarded an Oval Office meeting?

In Article I, Trump is accused of taking actions in Ukraine "that would help his election."

But when did it become a crime to consider the probable electoral consequences of decisions taken in foreign policy?

Admirers of JFK tell us he was ready to pull out of Vietnam, but only after the 1964 election, so as not to increase his vulnerability to the hawkish Republicans of the Goldwater era.

If true, was JFK guilty of impeachable inaction?