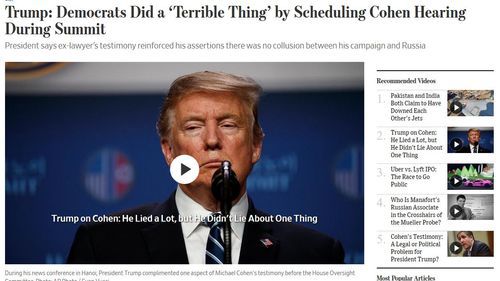 Patrick J. Buchanan: Is The American Century Over For Good?

"Politics stops at the water's edge" was a tradition that, not so long ago, was observed by both parties, particularly when a president was abroad, speaking for the nation.

The tradition was enunciated by Sen. Arthur Vandenberg of Michigan in 1947, as many of the Republicans in the 80th Congress moved to back Truman's leadership in the Cold War against Stalin's empire.

The tradition lasted until the mid-1960s, when the left wing of the Democratic Party turned viscerally, and even violently, against the war in Vietnam and President Lyndon Johnson.

Republican Presidents Nixon, Reagan and Bush I, with the support of conservative Democrats, led America to final victory in the Cold War

Yet except for brief intervals, like the rallying around George H. W. Bush after the triumphant Gulf War of 1991 and George W. Bush after 9/11, true national unity has never been restored.

Were proof needed, this week provided it.

President Trump flew to Hanoi, Vietnam, to meet North Korea's dictator. Subject of negotiations: Kim Jong Un's nuclear weapons, including his missiles that may be able to reach our homeland.

How did the Democratic Party wish the commander in chief well on his mission for America?

During Trump's first full day in Hanoi, a committee of Nancy Pelosi's House held a public hearing featuring ex-Trump lawyer and "fixer" Michael Cohen, a convicted perjurer and felon who cut a deal with the prosecution for a reduced sentence. The city loved it. Cable and network TV coverage went gavel to gavel. Cohen's testimony crowded out the Trump-Kim summit and even news of aerial clashes between India and Pakistan, two nuclear powers that have fought three wars since independence, 70 years ago.

What were the headlines Trump came home to after refusing to lift sanctions on North Korea, in return for meager concessions Kim offered?

"Cohen Paints Trump as Crooked" was the banner atop page one of The Washington Post. Cohen's depiction of his old boss was boldly quoted above: "He is a racist. He is a con man. And he is a cheat."

"Cohen Accuses Trump of Lies and Cover-ups" ran the page-one headline in The New York Times.

"Cohen Declares Trump a Racist, Cheat and Conman" read the huge headline in the Financial Times.

"Cohen Says Trump Guided Coverup" was at the top of page one in The Wall Street Journal.

Trump is denounced for calling media the "enemy of the people." Yet that media, in news columns as well as editorials, routinely describes him as a racist, sexist, xenophobe, homophobe, Islamophobe and bigot.

Indulging its hatred of Trump is a preoccupation, an obsession of this capital city. Those headlines reveal not only the news judgment of the editors but the agenda of the elite who turn to them first every morning.

That agenda is the breaking of this president; his disgrace and fall; and, if impeachment proves not possible, his crushing defeat in 2020 and subsequent indictment. Our so-called Dreamers in Washington, D.C., look to the triumphal return to power of the establishment the American people threw out in 2016.

Yet the alliance that seeks to bring down Trump is formidable: deep-state leakers and media collaborators; the Democratic Party and House; most of America's commentariat; and the cultural elites in the arts, academia and Hollywood.

How far beyond normal politics have the divisions in our society gone? As the Covington Catholic kids found out, wearing a MAGA hat is now seen as a racist provocation.

In the play unfolding, Cohen's testimony to the House committee was scene one of act one.

Next comes the Mueller report, though it appears Robert Mueller and his team, after investigating for two years, have found no collusion between Trump and Vladimir Putin in the hacking of the Democratic National Committee or the Clinton campaign.

Hence, the hopes of Trump haters are being redirected to the U.S. Attorney's Office for the Southern District of New York. Subjects of investigation: the Trump Organization, the Trump Inaugural Committee, the Trump Foundation, the Trump family and any entity with which Donald Trump has been associated in 40 years.

Again, as the president is chief of state and head of government, he cannot be indicted. He must first be removed from the presidency. But to remove him, Democrats have to impeach him in the House and convict him in a Republican Senate.

If they cannot, they will have to defeat him at the polls.

In 1968, George Wallace of Alabama tore the Southern populist right out of the Democratic Party. Liberals Gene McCarthy, Robert Kennedy and George McGovern then savaged Vice President Hubert Humphrey from the left. The Grant Park rioters did the rest.

Nixon, leading a minority Republican Party, had a compelling argument: "If the Democrats cannot unite their own party, how can they unite the nation?"

Today, a watching world is asking: If you Americans are at war with yourselves over race, religion, morality, culture and politics, if you cannot unite yourselves, how can you unite the world? And around what?

Maybe the American Century is really over.