Just as the Obama Regime recently threatened to dispatch riot squads against American citizens protesting their dispossession in Murrieta, CA, so too it is attacking its own immigration law enforcement officers and moving to destroy men of integrity within immigration law enforcement—as in its recent firing of the head of internal affairs for U.S. Customs and Border Protection, James F. Tomscheck. All of this has required constant propaganda from the fanatically anti-American Main Stream Media, exploiting the compassion of the American people with biased and manipulative sob stories.

The head of internal affairs for U.S. Customs and Border Protection was removed from his post Monday amid criticism that he failed to investigate hundreds of allegations of abuse and use of force by armed border agents, officials said.

James F. Tomscheck, who has held the post since 2006, is a 30-year veteran of federal law-enforcement agencies. He was given a temporary assignment in another job in Customs and Border Protection, which is the parent agency of the Border Patrol.

… Records released last month showed that only 13 out of 809 abuse complaints sent to Customs and Border Protection’s office of internal affairs between January 2009 and January 2012 led to disciplinary action.

This writer can attest that Tomscheck is a career Federal law enforcement officer of outstanding integrity. His dismissal is not based on failure to conduct investigations but the objective outcome of those investigations. The most obvious explanation for the low rate of disciplinary action: most allegations were baseless. But to the anti-American Left and the Obama Administration (same thing, really) there is a Stalinist presumption of guilt.

Getting to the point where the Regime can perpetrate this sort of atrocity has required a relentless bombardment of lies. A typical example:

Anastasio Hernandez Rojas screamed in agony as U.S. border agents rained blows on him and delivered 50,000 volts of electricity to his body over and over.

"No! No! Ayuda!" the 42-year-old Mexican wailed, pleading for help in Spanish. "Ayudenme [help me]!"

It was late in the evening of May 28, and his cries could be heard throughout the San Ysidro border-crossing area dividing San Diego and Tijuana.

My analysis: Of course, the Houston Press is owned by the same holding company as the notorious leftist Village Voice. And buried in Alonzo’s story about the cuddly father of five is that his death was due to “a combination of methamphetamine in his system, high blood pressure, and a heart attack.” (My emphasis). 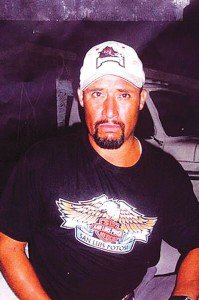 So Rojas (pictured right) did not die of a beating or a Tasering, but from the effects of his own violent resistance on a methamphetamine-strained system. Needless to say, even the revelation of this damning piece of evidence barely interrupts the flow of propaganda.

And despite all the Sturm und Drang about his death, the San Diego Police Department was unable to find evidence of a crime and the U.S. Attorney’s Office was unable to file any charges for lack of evidence:

San Diego Police Department homicide detectives conducted an investigation and turned over their findings to the U.S. Attorney's Office in San Diego, where the case remains under investigation.

In place of real evidence, the cultural Marxists and Mexican revanchists produce propaganda that even they casually reveal is of no real evidentiary value:

Despite their calls for reform, volunteers continue to hear stories of abuse from the men, women, and children the Border Patrol has detained.

No More Deaths volunteers documented hundreds of cases in a 2008 report, "Crossing the Line — Human Rights Abuses of Migrants in Short-Term Custody on the Arizona-Sonora Border."[PDF]

Many of the stories are incomplete because migrants are afraid to provide their full identities, and once their brief encounters with volunteers at migrant-aid stations are over, they are gone, untraceable. [My emphasis].

Paulino arrived at the No More Deaths aid station at the Nogales, Sonora port of entry on August 5, 2006. The 29-year-old from Cancún was crying and in severe pain. He told volunteers he had traveled alone through the desert for three days before he was captured by Border Patrol agents and deported. While in custody, he said armed agents kicked him in the stomach. He said they told him they didn't speak Spanish and refused to provide him medical attention.

At the aid station, his genitals were swollen, his urine contained blood, and he struggled to walk. The Mexican Red Cross examined him, telling him he needed surgery. But medics said he must return to Cancún for the operation. Paulino had no money for a bus ticket to get home, let alone funds for medical care. He walked away and was never heard from again.[Links added by VDARE.com]

The Press even portrayed a “squeezed arm,” as a form of torture, with protests “[eliciting] no mercy from her captor.” The Spanish Inquisition, it seems, has nothing on the Border Patrol.

This kind of emotional agitprop has moved from the fringe leftist rags to the Editorial page of Gray Lady herself:

If a Border Patrol agent beats, kicks, threatens or otherwise abuses you, you can file a complaint. What you can’t count on, evidently, is anything being done about it.

That is the sorry conclusion of a study released last week by the American Immigration Council, an advocacy organization in Washington. The council sought to collect data about abuse complaints against the Border Patrol — a difficult task, given the lack of transparency at Customs and Border Protection, the agency within the Department of Homeland Security to which the Border Patrol belongs…

For 472 complaints, or 58 percent, the case was closed under the heading “No Action Taken.” An additional 324 cases, or 40 percent, were still being investigated. Only 13 cases led to disciplinary action, most often counseling. There was just one suspension. [Links in original]

One problem with the “study,” the NYT acknowledged in a throwaway line, is “there was no way to independently judge the validity of the complaints.” Furthermore, the American Immigration Council, which conducted the study is staffed with members of the Treason Bar, who have a vested interest in border chaos.

James T. Tomscheck is a martyr in the war against the historic American nation waged by the Obama Regime and its lackeys in the press.

To our own Commander in Chief, the real enemy is not drug smugglers or hostile foreigners—but the very people who obey their oath to country and Constitution.