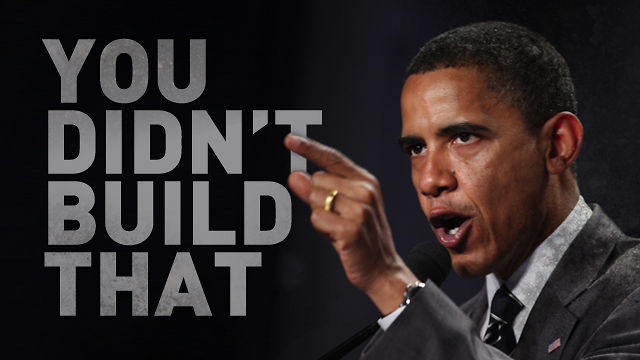 "If you've got a business, you didn't build that. Somebody else made that happen." Mitt Romney fell on this Obama quote like an NFL lineman on an end zone fumble during the Super Bowl. And understandably so.

For this was no gaffe, said Romney, this is what Obama believes. This is straight out of the catechism. Obama thinks that had not the government created the preconditions, none of us could succeed. We all depend on government. None of us can make it on our own.

Had Obama been channeling Isaac Newton—"If I have seen further than others it is because I am standing on the shoulders of giants"—or John Donne—"No man is an island, entire of itself"—many would have nodded in agreement.

But what Obama seemed to be saying—indeed, was saying—was that, without government, no business can succeed.

Realizing that statement rubs against a deeply ingrained American belief—that the people built the nation—Obama and his acolytes are charging that Romney ripped his words out of context.

"If you were successful, somebody along the line gave you some help. There was a great teacher somewhere in your life. Somebody helped to create this unbelievable American system that we have that allowed you to thrive. Somebody invested in roads and bridges. If you've got a business, you didn't build that. Somebody else made it happen."

Even with this preamble, Romney seems to have it right. Obama sees government as indispensable. Without the roads and bridges that government builds, without the teachers government provides, no one succeeds. It takes a village.

Yet Obama's narrative does not tell us why some succeed and others fail. Does Obama understand America? For he surely does not seem to understand her history as once taught to every schoolchild.

From Jamestown in 1607 to Yorktown in 1781, there was no federal government. There was no United States. Yet generations of colonists had built forts, cleared lands, created farms, established workshops. Americans fed, clothed and housed themselves, creating one of the highest standards of living on earth for 3 million people.

How could the U.S. government have built the roads and bridges if the U.S. government did not exist before 1789? There were no public schools until the 19th century. Colleges were the creations of religious denominations. The Pell grant had not yet been invented.

Did Wilbur and Orville Wright learn how to build bicycles in a CETA program? Were the feds responsible for the flight at Kitty Hawk?

Seeing government as antecedent to enterprise, Obama has it backward. In America, individuals, families, communities came first. Hardworking men and women built the society. Only after that did they send their best and brightest off to the House of Burgesses to discuss colonial issues.

The Founding Fathers who created the U.S. government were deeply distrustful of the centralized power Obama seems to worship. They had had enough of the beneficent big government of George III. Obama notwithstanding, government does not create wealth. Government collects wealth, redistributes wealth, consumes wealth.

Even when government "builds" something like a Golden Gate Bridge, it does not really build it. It commissions it. Architects, engineers and construction companies build the bridge, not bureaucrats from HUD.

"Some people regard private enterprise as a predatory tiger to be shot. Others look on it as a cow they can milk. Not enough people see it as a healthy horse, pulling a sturdy wagon," said Winston Churchill.

But perhaps he cannot be blamed for not understanding the real America. His mother and father, his role models like Frank Marshall Davis and Saul Alinsky, his neighbors like Bernardine Dohrn and Bill Ayers, all came out of the anti-capitalist left.

From academia to community organizing to an Illinois legislature that milked so much money from the people the state may beat Jerry Brown's California into bankruptcy—Obama's life has been spent in tax-exempt, tax-subsidized and tax-supported institutions.

Yet this Obama-Romney collision frames the great issue of 2012.

Which is the true creator of wealth and engine of prosperity?

Is it, as Obama believes, government?

Or is it, as Romney believes, people and their institutions and businesses that, though carrying the immense burden of government that consumes 37 percent of the economy, still employs six of seven Americans still working? That's the choice.

Patrick J. Buchanan needs no introduction to VDARE.COM readers; his book State of Emergency: The Third World Invasion and Conquest of America, can be ordered from Amazon.com. His book Churchill, Hitler, and "The Unnecessary War": How Britain Lost Its Empire and the West Lost the World,  is reviewed here by Paul Craig Roberts. His new book Suicide of a Superpower: Will America Survive to 2025? was released October 18, 2011.