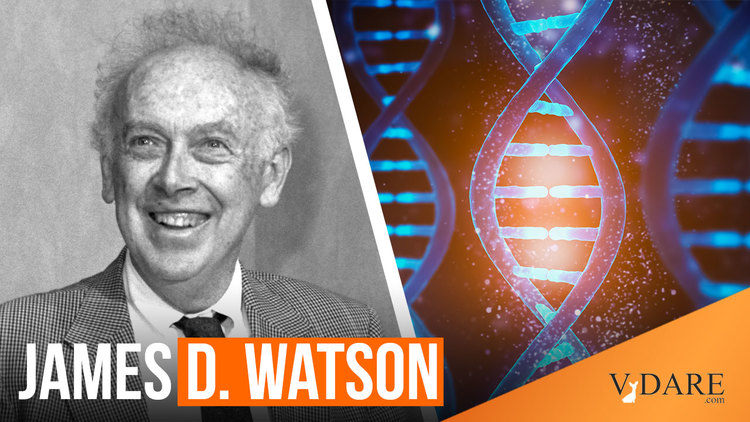 Obama And James D. Watson: How To Make A Real Statement About Race—And Free Speech

At VDARE.COM. we've never been in the business of endorsing Presidential candidates. And considering who's left in the running in 2008, we're certainly not going to start now.

But by publishing revelations about one candidate, aren't we tacitly just helping the others?

For example, when Sen. Barack Obama, who has been running largely on his autobiography, makes campaign claims about his relationship with his pastor or his grandmother and I point out that his 1995 autobiography says something very different, I always receive messages denouncing me for being culpable for electing Hillary Clinton and/or John McCain.

Apparently, I'm orchestrating a plot to change the course of human history by sitting here in my bathrobe copying paragraphs out of the Democratic frontrunner's own bestseller.

In this view, a presidential campaign is a zero-sum contest. Somebody has to win and everybody else has to lose. So any revelation about Candidate X is seen, not as contribution to the sum total of human knowledge, but as a dirty trick intended to elect Candidate Y or Z.

In contrast, I believe that the more that voters know about the candidates, the better. Of course, I would say that: as a nonfiction writer, that's my professional bias.

Still, I do believe the zero-sum model is simplistic.

Moreover, the reason I write more about Obama than about Clinton or McCain is because I think I have more to contribute about him. The two old warhorses have been around forever, but few journalists have thought hard and honestly yet about Obama, due to his sudden emergence—and his race.

For example, for over a year, I've been pointing out that Obama isn't the centrist post racial conciliator he plays on television. His campaign has been as disingenuous as if Ronald Reagan had run for President in 1980, not as a proud conservative, but as a bipartisan middle-of-the-roader.

In truth, Obama is a liberal somewhat to the left of the Democratic median, and with a recent radical background. And slowly, the MainStream Media [MSM] is starting to wake up to the phoniness of Obama's marketing of himself. This week, the New York Times [Obama's Test: Can a Liberal Be a Unifier?, By Robin Toner, March 25, 2008] and Washington Post [In Obama's New Message, Some Foes See Old Liberalism, By Alec MacGillis, Washington Post,  March 26, 2008]have finally gotten around to admitting in major stories that Obama is well to the left of where many imagine him to be.

This slow debunking of Obama might have crucial implications for his Vice Presidential selection. The more people who understand who Obama really is, the more pressure he will be under to pick as a ticket-balancing running mate an anti-Obama, such as Sen. James Webb (D-VA).

Moreover, within a President Obama, there would always be an ongoing struggle between his cautious head and his radical heart. The more a gullible press and public persist in imagining him the equally loving son of a happy biracial home, the more leftist actions his heart will be able to get away with. But the more we are alert to the two sides of this complicated man, the more likely his intelligent prudence would triumph over the passion to prove himself "black enough" that is the remnant of his psychologically-damaging childhood.

For example, the more he is seen, correctly, as a man who chose to devote much of his adult life to pursuing political power in order to take from whites and give to blacks, the more scrutiny a President Obama would receive over seemingly minor questions such as appointments to jobs at the Equal Employment Opportunity Commission and the civil rights section of the Justice Department.

These obscure offices can be tremendously important. Consider, for example, the slow-motion disaster that minor Carter Administration officials at a department almost nobody has heard of inflicted upon America in early 1981.

From the 1920s onward, the federal government introduced ever-improved civil service exams, culminating in the 1970s with the superb Professional and Administrative Career Examination (PACE). Because these cognitive tests assessed not just entry level skills, but the applicant's potential for higher management, the quality of the federal workforce was relatively strong for much of the 20th Century.

Then, in January 1981, with only a few days left in the defeated Administration, Carter appointees in the U.S. Office of Personnel Management signed a consent decree in the Luevano nuisance suit agreeing to throw out the PACE, because blacks and Hispanics averaged lower scores on it, and to replace it with a test that would have predictive power but not "disparate impact."

More than a quarter of a century later, no such miracle test has been invented. In fact, of course, it can't be invented—because the races do differ systematically in intelligence. And so the various federal departments continue to make due with a hodge-podge of job application techniques that have been shown to be less effective than the extinct PACE. As the pre-Luevano hires retire, a less competent generation of employees is rising to senior management in the federal bureaucracy, with predictable results.

Similarly, there's no end to the domestic mischief that an Administration appointed by Jeremiah A. Wright's congregant could get up to without intense public oversight.

Finally, the more Obama's phony claim to be a racial mediator who wants to start a "frank conversation about race" is derided, the more he might actually someday do something to justify his grandiose posturing.

The MSM found Obama's 5,000-word speech last week to be "nuanced," thoughtful," and even "worthy of Abraham Lincoln" in MSNBC's Chris Matthews' excited estimation. But its power-to-weight ratio was not exactly in the same ballpark as the 278-word Gettysburg Address.

Obama didn't actually do anything in his speech. He's not leaving his radical / racialist church. His  policy prescriptions were just warmed-over LBJ-ism.

Still, if he so chose, Obama could alleviate his Jeremiah A. Wright problem by making a major symbolic contribution to freedom of speech in America.

Obama surely knew all along that Americans would eventually find out about what Wright preaches and be appalled by it. The most sensible strategy would have been for Obama to slowly bring up his pastor's outrageousness and make a running joke out of it, while saying that a free society must err on the side of free speech.

The ridiculous moral panic over radio broadcaster Don Imus's vulgar off-hand comment last year offered Obama a perfect opportunity to call for forgiveness for Imus and, at the same time, have a laugh about his own pastor being a sort of "shock jock of the pulpit."

Obama could have put on that really serious baritone he does so well, and say:

"But the important lesson is that we must protect freedom of expression, even at a cost to our sensitivities. Being a free country means that people, such as Don Imus and my pastor, are sometimes going to go over the line now and then, but we are all better off living with that than shutting them down."

Instead, Obama sanctimoniously denounced Imus—demonstrating the "Who? Whom?" thinking that he has made the core of his identity.

Of course, the egomaniacal Rev. Dr. Jeremiah A. Wright, Jr. might never have stood for being lumped with a mere disk jockey like Imus. Indeed, it's possible Wright is trying right now to passively-aggressively sabotage Obama's campaign.  And who knows what explosive secrets Obama's mentor might be able to unveil if he got really peeved at the candidate.

Nevertheless, with the November election still endlessly far off, there is time for Obama to gin up a principled defense-by-analogy of Wright—by championing free speech for one of Obama's own campaign contributors, a man of such vast accomplishment that even Wright's massive amour propre might be assuaged at the tactic of lumping Wright and this Obama supporter together.

Q. Who is this victim of political correctness/lifelong Democrat who donated the legal maximum of $2,300 to Obama on January 10, 2008?

A. America's most eminent living man of science—James D. Watson, the co-discoverer of the structure of DNA!

In 2006, a panel of historians assembled by the Atlantic Monthly ranked Watson the second most influential figure in American history living today. And yet, as you'll recall, when Watson tried to start a frank dialogue on race last year, he was immediately fired by Cold Spring Harbor Laboratory, the outstanding medical research center that he had built up over the last four decades.

If Obama were to appear with Watson and announce that the great man had accepted his invitation to advise the Obama campaign on issues involving science, and if Obama pointed out that the country's elites should be ashamed of how they treated Watson last year, then we'd have some evidence that Obama isn't the hypocrite that he appears to be.