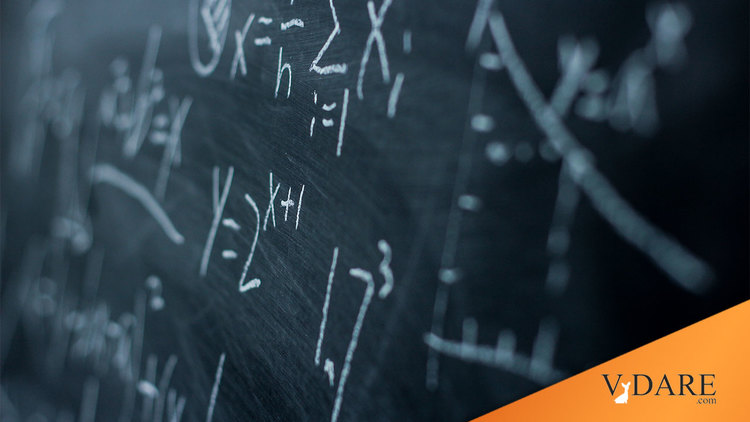 Whenever I protest the firing of distinguished thinkers such as James Watson and Larry Summers for doubting the race-denying Blank Slate conventional wisdom, I often hear back something like this:

"Everybody who is in a position of power knows the facts, but, THINK OF THE CHILDREN! We can't deflate their self-esteem by mentioning the truth in public. Don't worry, though, the big guys aren't naïve—they won't do anything stupid just because we're all supposed to talk as if everybody is exactly the same in intelligence."

But the evidence from what the big guys do makes appallingly clear that, in fact, they actually really, truly believe their own press releases.

Consider one of the biggest of the big guys, the governor of the largest state in the union: Arnold Schwarzenegger.

Last month, the former action hero persuaded the California Board of Education, all of whom he had appointed, to make California the first state to require that all public school students, no matter how slow, take Algebra I in eighth grade.

This will be so destructive that even the State Superintendent of Public Instruction, Jack O'Connell, a notorious nimrod who last year blamed lower black test scores on white teachers imposing too much discipline on black children taught in black churches to be physically active, protested strongly.

Currently, in the massive Los Angeles public school district, four percent of students take Algebra I in seventh grade (as my son did when he went to an LAUSD middle school), 45 percent in eighth grade, 55 percent in ninth grade, 20 percent in tenth grade, and eight percent in eleventh grade. (The numbers add up to 132 percent due to students repeating the class because they flunked it.)

Here's that paragraph in visual form:

The four percent of kids (in the salmon-colored cells on the lower left diagonal of the table) who make it into their second semester of Algebra I in 7th grade, and thus are qualified to take the California Standards Test in Algebra I, are the same type of math stars who go on to take Geometry in 8th grade and Algebra II in 9th grade.

Similarly, the 45 percent of above average kids who take Algebra I in 8th grade (the yellow diagonal) go on to do okay in Geometry in 10th and Algebra II in 11th.

The kids in the bottom half of the bell curve (gray diagonal) begin taking high school level math in 9th grade. They do poorly in it, as well as in Geometry and Algebra II. (The kids in the uncolored cells in the upper right are typically ones who flunked a standard track course and are trying to catch up later. They do badly.)

Obviously, there are many students who would benefit more from studying basic math in 8th grade rather than jumping in over their heads into algebra.

And the ones who are capable of learning algebra at that age won't benefit from having the other kids dumped, against their will, into their Algebra I classrooms.

Yet, the Governator prevailed by an 8-1 vote.

The technical issue at hand was whether the state would continue to offer two different California Standards Tests to eighth graders in the late spring of each school year: a harder one for the half who are taking Algebra I and an easier one for those who haven't started on algebra yet because their teachers and parents don't see them as being ready for it.

Board of Education president Ted Mitchell, a Schwarzenegger appointee, proudly said the new policy rammed home by Schwarzenegger demonstrates that there is "unequivocally one set of standards for all kids, no matter their ZIP code, race or income level".[Algebra 1 to be required for all 8th-graders, By Nanette Asimov, San Francisco Chronicle, July 10, 2008]

In previous generations, Algebra I was traditionally a ninth grade subject. It was felt that most students weren't ready for the higher level of abstraction that algebra requires until well into puberty. These generations went on to design space rockets with slide rules, so maybe this wasn't such a bad idea.

Lately, though, the educational system has pushed for introducing more advanced math earlier. And California has taken the lead. As Schwarzenegger noted in his decisive letter to the Board of Education:

"Since 2003, the number of California eighth graders taking Algebra I has increased from 34 percent to 52 percent, compared with just 30 percent of eighth graders nationwide. We expected more of our students, and they delivered."[PDF]

Bunk. In reality, the students didn't deliver at all. In 2003, California public school students scored nine points below the U.S. average on the National Assessment of Educational Progress math test for eighth graders. In 2007, after the large increase in the number of California eighth graders taking Algebra I that Schwarzenegger boasts of, they lagged the national average by ten points.

The more things change, the more they stay the same.

However, there's a very simple explanation—the kids who have been getting into advanced math classes at an earlier age are better at math.

Unfortunately, that's not the kind of explanation you're supposed to mention in polite society.

Here are the percentages of Los Angeles students scoring Advanced (the equivalent of an A) or Proficient (B) on the California Standards Tests, with some color-coding to help you see what's really happening.

Why? Because we punish prominent leaders like Summers and Watson who admit that they don't believe the reigning dogmas. Therefore, we shouldn't be surprised when other leaders, like Schwarzenegger, act as if these dogmas are real.

"The State Board must choose whether we align the eighth-grade mathematics test with our high expectations or perpetuate a two-track system: one for high achievers and one for those of whom we expect less."

Personally, I think a two-track system in math education seems like a good idea.

The second semester of Algebra I is particularly hard because the California standards focus on quadratics and rational expressions.

The first half of Algebra I, fortunately, is devoted to straightforward, widely useful problems like this one taken from the most recent California Standards Test of Algebra I (the test that was the subject of the dispute between Schwarzenegger and O'Connell):

By the spring, however, California's Algebra I standards demand a wholly different level of cognition:

The answer, symbolically enough, is D: "No real solution".

The United States of America is currently undergoing an economic crisis caused, in some not insignificant measure, by California homebuyers who couldn't calculate the impact of a rise in interest rates on their home mortgage payments. We could be teaching the less-advanced half of eighth graders about interest rates. But instead, Gov. Schwarzenegger insists that we teach them all about rational expressions.

A "rational expression", as you no doubt remember, is not what I say as opposed to what the Governator says—here's an example from the CST:

The answer, in case you were wondering, is C.

The Bush Department of Education (needless to say, given its authorship of the No Child Left Behind fiasco—see below) cheered Schwarzenegger on. The Associated Press reported:

"Assistant U.S. Secretary of Education Kerri Briggs praised the board's action. She said California was setting a bold goal that would not be easy to achieve but was critically important. 'Kids are dropping out because they're bored and they don't feel like there's enough challenge and expectations for them,' she said. 'This may be exactly what they need to help spur achievement.'"

No, actually—the number of students who drop out because they aren't being taught enough abstract math is negligible.

Far more drop out because they can't pass required math courses like Algebra I and Geometry (and starting, this fall in Los Angeles, Algebra II).

Nor can they see how they would ever use the kind of techniques taught in the second semester.

"This fork in the road is a choice between California's bold future and a status quo that is safe, mediocre and unacceptable".

Bunk (again). In reality, "mediocre" would be a distinct improvement over California's present. As Schwarzenegger admitted, "In 2007, California's eighth graders ranked 44th in the nation in mathematics achievement".

(By my count, though, California's eighth graders actually came in 45th out of the 50 states. Yet, who cares about simple arithmetic when we have the abstract worlds of algebra to conquer?)

"I am asking the State Board to do away with the below grade-level General Mathematics test and designate the state's existing Algebra I exam as California's test to measure eighth-grade mathematics for federal accountability purposes. To do otherwise would lower our expectations and continue to divide our children between those we believe in and those we leave behind."

I'm frequently accused of over-rating the importance of IQ. Nonetheless, it's the mainstream (and nobody more perfectly represents mainstream thinking than the liberal Republican governor of California) who repeatedly act as if they believe lower IQ people are so innately worthless that we all must pretend that they actually have the same IQ as everybody else.

As Karl Rove once notoriously said, he didn't want his son doing menial hotel work (so bring in Hispanic illegals). But America once respected the dignity of labor.

"If we don't believe in every child's potential, how can we ask children to believe in themselves?"

This is both a cliché and insanity.

We all know that the potential of some individuals in mathematics is incredibly greater than that of others. As Charles Murray wrote in the "Summation" chapter of Human Accomplishment, quoting math historian John Derbyshire:

"Before the Eulers, Gausses and Newtons, we are worms, worms."

And, guess what? The vast majority of human beings don't find their sense of self-worth shattered by not measuring up to Gauss in mathematics. (Indeed, most of them have never heard of him.) As Tolstoy observed:

"Today's decision sends a signal to the rest of the nation that California has faith in our students to achieve their dreams and exceed expectations. California's children have already proven that when we set the bar high—they can do anything."

Yet, these days, is there really much of a difference? For example, in 2001, President Bush and Senator Kennedy got together and passed the No Child Left Behind act, which mandates that every single public school student in America will by 2014 score "proficient" (i.e., above average).

This madness is driven by the perceived need to act as if, real soon now, we're going to social engineer all ethnic groups into equality.

Sadly, children get hurt by this irrational policy-making.

It's time to stop worrying about eliminating group differences—and start worrying about helping all students achieve as much of their potential as feasible.