When the VOX website launched in April 2014, editor Ezra Klein’s lead editorial, How Politics Makes Us Stupid, expressed distress over political polarization. The political divide, he mused, was not because people look at different sets of facts, but because they selectively cull facts that comport with their own prejudices and reject the others. Polarization, in Klein’s view, was about values, not facts: “For a lot of people, being "right" just isn’t worth picking a bitter fight with the people they care about.” The implication, of course, was that VOX would be both “right” and true to its liberal values. A recent immigration enthusiast screed The Case For Immigration [April 3, 2017] by Matthew Yglesias [Email him] VOX’s immigration expert, shows how wrong Klein [Email him] was:

VOX: “For the immigrant population at large, the best research on the fiscal impact of immigration comes from the National Academies of Sciences, Engineering, and Medicine, which concluded that over the course of a 75-year time horizon, ‘the fiscal impacts of immigrants are generally positive at the federal level and generally negative at the state and local level.’ Immigrants, in other words, pay more to the federal government in taxes than they receive in benefits, while the reverse is true for state and local governments.” [Links in original throughout]

VDARE.com: The 75-year projection is based on hopelessly hypothetical “models” – complex mathematical formulations that reflect the prejudices of their creators in ways ordinary folks cannot fathom, even if we could see them. (They are never revealed.) More prosaic, but far more relevant: the fiscal impact of immigrants now. The NAS study is perfectly clear on this point: immigrants receive more benefits than they pay in taxes to all governments—federal, state, and local. In 2013 (the latest year of data available to NAS researchers) immigrants and their U.S. born children received government outlays worth $15,908 per capita, while paying $10,887 per capita in taxes. (Table 8-1, p. 319 of the NAS report) That translates to a per capita deficit of $5,021 Multiplying by 55.5 million individuals (immigrants and their dependents) the total fiscal burden for the first generation comes to $279 billion in 2013. NAS notes that “…the first generation group accounts for 17.6 percent of the population but 22.4 percent of the total deficit.”

VOX: “…even an immigration skeptic like George Borjas concedes that immigrants grow the economy and do not personally obtain 100 percent of the benefits of that growth — meaning their presence increases the overall level of resources available to the native population.” [Link in original]

VDARE.com: Size matters. Borjas does indeed concede that immigrants “grow the economy,” and do not obtain 100% of the benefits from that growth. But his number—97.8%—is damn close to 100%—it leaves only 2.2% of immigration’s economic benefits to people already living in the United States. [Immigration and the American Worker, By George Borjas, CIS.org, April 2013]

And even that small benefit, equal to a mere 0.24% of GDP, is overwhelmed by transfer payments—the cost of providing welfare, education, and other services to immigrants.

Despite the impression that Yglesias tries to leave, the consensus among economists is that immigration’s major impact on native-born Americansis distributional: it lowers the wages of native-born workers and raises the income of their employers and other upper-income  native-born Americans who hire immigrants for personal services.

VOX: “By the same token, there is a fairly firm consensus that immigration raises incomes on average for native-born workers. When the University of Chicago’s Booth School surveyed a panel of well-known academic economists, for example, 52 percent agreed that admitting more low-skilled immigrants to the United States would make the average US citizen better off. Just 9 percent disagreed.”

VDARE.com: Whoa! Yglesias shifts gears, abandoning the scholarly NAS report for a survey of “well known academic economists.” Talk about rejecting evidence that conflicts with your values! The 2016 NAS study (on page 180) finds that native-born workers at every educational level suffered wage losses due to immigrants arriving between 1990 and 2010. High school dropouts lost 4.9%; High school graduates lost 2.3%; College grads 2.7%; and even native-born Americans with advanced degrees suffered a 3.3% wage decline.

As expected, the biggest losers were earlier immigrant cohorts with similar educational levels. Foreign-born dropouts, for example, lost a whopping 8.5% of their wage income, while foreign-born college grads lost a hefty 8.1%. The 1990-2010 influx increased the supply of dropouts by 26%, and college grads by 11%.

The wage declines in the various educational groups mirror the immigration-related increase in workers in those groups. This is not rocket science, it’s supply and demand, lessons learned in Economics 101, lessons the Chicago panel of economists chose to forget.

VOX: “…. even “unskilled” immigrants serve to increase the supply of skilled labor through their work in the household sector. Patricia Cortes and Jose Tessada find that cities with larger numbers of less skilled immigrants see higher labor force participation and more hours worked by highly skilled women, who hire more hours per week of maids, nannies, and cooks, allowing them to shift their labor efforts out of unpaid home production and into market work. Immigrants who do work mowing lawns, cleaning pools, and other household activities likely have a similar impact.”

VDARE.com: We agree! Immigration widens the income gap between haves and have-nots, and this scenario shows why. The influx of less-skilled immigrant women displaced many native-born black and Hispanic females, who, had their immigrant competitors not depressed wages, would be willing, able—and grateful—to be nannies, maids and cooks. Meanwhile, by reducing the price of household help, the new immigrant females enabled more skilled native-born women to enter the labor force. The end result: higher incomes for native-born Americans at the top of the income distribution—and lower incomes for those at the bottom. This, in a nutshell, is why mass immigration may be the most regressive of all public policies. And shows how weird it is that liberals like Yglesias support it so fanatically.

VOX: “…For Trump, the central mode of anti-immigrant rhetoric has always been a more visceral fear of violence… To the extent that you want to whip people into an anti-immigrant fervor, it’s a good idea. There are millions of foreign-born people in the United States, and naturally every day some of them are caught committing crimes. Indeed, because immigrants are younger on average than native-born Americans, they commit a somewhat disproportionate share of crime.”

VDARE.com: Trump’s comments about Mexico sending us rapists were controversial, but they shouldn’t have been. As Ann Coulter noted in her best-seller Adios America!, which reportedly inspired Trump’s remarks, there’s a clear pattern of news reports indicating immigrant criminality, and a Mexican specialty in rape, but even professional criminologists have trouble quantifying immigrant criminality because government refuses to count. While prisons can determine the race and ethnicity of inmates, immigration status is generally based on self-reporting. So-called “sanctuary cities” actually forbid local police departments from even asking prisoners about immigration status.

We do, however, have partial data on illegal aliens, the crimes they commit, and where they are from. The Department of Justice’s State Criminal Alien Assistance Program (SCAAP) reimburses prisons and jails for the costs of holding illegal aliens. Prison systems must document the immigration status of inmates to get SCAAP payment. (Sanctuary jurisdictions choose to forego the subsidy).

In a 2011 report, Criminal Alien Statistics, the Government Accountability Office studied the 249,000 illegal aliens for whom SCAAP funds were paid in 2009. It found that these aliens had been arrested a total of 1.7 million times, an average of roughly seven arrests per illegal alien inmate, and had been charged with 2.9 million separate offenses—roughly 12 offenses each. All told, these criminal aliens accounted for 25,064 homicide arrests, 69,929 sex offenses, and 213,047 assaults. The GAO found that two-thirds of SCAAP prisoners in state prisons were born in Mexico.

Immigrants are indeed younger than native-born Americans, and immigration apologists often cite this to excuse their above average incarceration and arrest rates. Some argue that when age differences are taken into account, immigrants are no more likely than native-born whites to commit crimes. 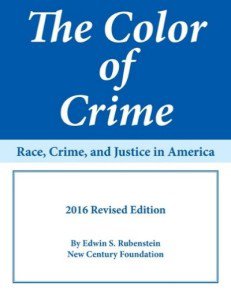 It is not possible to test this theory nationally, because many jurisdictions put Hispanics and Whites into the “White” category. However, California’s crime statistics distinguish consistently between whites and Hispanics, and include arrest rates by age group, albeit not by nativity. The findings, as reported by me in The Color Of Crime, 2016: Hispanics of every age group are more likely than whites to be arrested for every type of violent crime. For the highest-crime age group of 18 to 29, this is particularly noticeable for homicide (2.7 times the white multiple), rape (2 times) and kidnapping (2 times).

It’s immigration enthusiasts who approach the subject with “fervor.” What VOX’s Yglesias provides here are not facts but factoids, designed to rationalize what appears to be his visceral drive to transform America.