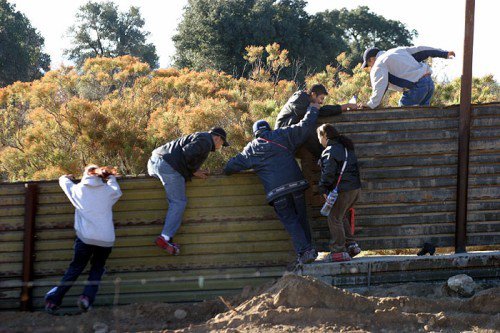 The economy pumped out another 215,000 new jobs in July, about in line with expectations. While the unemployment remained at 5.3% —the lowest level in more than seven years—wages remain stuck on a slow treadmill.

The average hourly wage paid to American workers rose 0.2% in July; over the past 12 months wages have risen a mediocre 2.1% versus the 3% to 4% typical at this stage in previous recoveries. Chamber of Commerce types love this, of course, and love the surge of foreign-born workers that keeps wages low. Immigration-related wage stagnation arguably hurts more native-born American workers than immigration-related unemployment. Except for academic treatises (think George Borjas) the data aren’t available.

Job growth as reported by the “other” employment survey, of households rather than businesses, was a dismal 101,000.

Unusually, and for the second month in a row, all the new jobs went to native-born American workers

There are no straight lines in nature, and anomalies happen occasionally—for example, December 2013—January 2014 and December 2014-January 2015. It may just be statistical noise. But the underlying trend has remained intact: native-born American workers have lost ground to their immigrant competitors throughout the Obama years. This is made clear in our New VDARE.com American Worker Displacement Index (NVDAWDI) graphic:

The key displacement metric is the immigrant share of total U.S. employment. In Barack Obama’s first full month in office (February 2009) 14.97% of all persons working in the U.S. were foreign-born, according to that month’s Household Employment Survey. Since then the foreign-born share has risen steadily, albeit erratically:

July’s immigrant employment share was 1.53 percentage points above the level recorded at the start of Mr. Obama’s administration—i.e. it has risen by 10.2 percent.

(This of course does not take account of the immigrants’ American-born children, who are increasingly entering the workforce. I will look at this issue in a future National Data).

It’s bad enough that conventional commentary on the employment data almost never considers immigrant displacement of American workers. It’s even worse that it is failing to notice the disturbing evidence I’ve been reporting for months that a new illegal immigration surge is apparently underway. Thus once again, the July report estimates that the working-age immigrant population (16 and over) rose by 1.660 million over the past 12 months. That is well above the number of legal immigrants of all ages Homeland Security claims is entering.

Increased illegal immigration seems to be the only explanation.