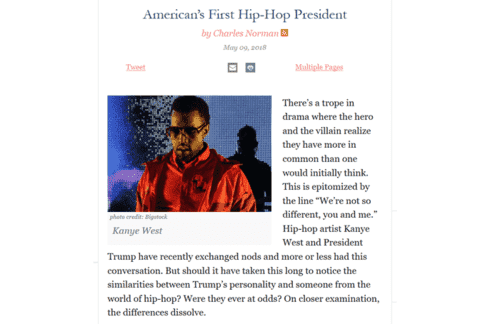 There’s a trope in drama where the hero and the villain realize they have more in common than one would initially think. This is epitomized by the line “We’re not so different, you and me.” Hip-hop artist Kanye West and President Trump have recently exchanged nods and more or less had this conversation. But should it have taken this long to notice the similarities between Trump’s personality and someone from the world of hip-hop? Were they ever at odds? On closer examination, the differences dissolve.

When Kanye released his debut album in early 2004, nerds were at their peak in popular culture, with Seth Cohen, Peter Parker, Rivers Cuomo, and Mark Zuckerberg as the nerd heroes of the hour. Millennials found in Kanye a braces-wearing rapper who watched anime—their nerd in hip-hop.