The administration has been relocating the unaccompanied children (arriving at rate of at least 400 daily) from the south Texas border to military bases like Fort Sill Oklahoma and beyond.

Now we learn that one of the beyonds was a recently closed black college in Virginia, St. Paul’s College located in Lawrenceville, population 1438. The government intended to do an unannounced deposit of 500 illegal alien children on the campus, but plans were discovered and people spoke up. Concerns mentioned include communicable diseases and gang violence from the “teenagers.”

An interesting detail was how the administration signed a lease for five months, with an option to extend it for up to three years. So a rapid solution, either deportation or amnesty, is not necessarily the plan. The administration might like the idea of establishing Europe-style deluxe refugee camps where asylum pests live for years while their cases are considered.

Another Washington scheme was to house some of the high maintenance young people at a closed Baltimore office complex, but the mayor and both Senators (all Democrats) objected and the plan was shelved. Democrats believe scruffy immigrants are for thee but not for me.

Below, the administration saw the pleasant campus of St. Paul’s College as an acceptable refugee camp for junior illegal aliens. 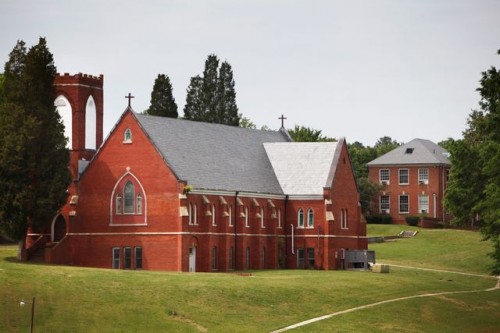 The deal is on hold for now. Hopefully the skeptical townspeople will prevail.

The Obama administration Monday abruptly halted plans to shelter some of the children surging across the border at a defunct college in rural Virginia, as the White House has continued to see its efforts to house the children throughout the country be thwarted by opposition from local officials.

As many as 500 children were to start arriving this week at St. Paul’s College, a recently closed historically black college in Lawrenceville, Virginia. But the Health and Human Services Department’s plans were stymied, at least temporarily, after town and county officials objected to the short notice and complete lack of community input.

“We were stunned,” said Robert F. Pecht III, president of the Lawrenceville Town Council, who learned of the plan Friday evening. “We were told it was a done deal. The lease was signed, and that was it.”

As the feds worked over the weekend preparing the campus for the arrival of the children, whom officials said would be ages 11 to 17, public outrage erupted in the community, which is about 70 miles south of Richmond.

Letters flooded the town council offices, including from nearby residents threatening to boycott the town if the college became a way station for illegal immigrant youths.

Rep. Robert Hurt, the Republican congressman who represents the region, sent a letter to HHS Secretary Sylvia Mathews Burwell on Monday morning demanding she halt the project. After the delay was announced, Mr. Hurt said it should be the beginning of a total rethink.

“I would request that they completely halt the implementation of this plan and return to the drawing board,” he said in a statement. “If the HHS plan is indeed good for the people of Lawrenceville and Brunswick County, then they should begin with a transparent and open process that includes the community and the local elected officials every step of the way and ensures compliance with all local, state and federal laws — including the local zoning ordinances of the town of Lawrenceville.”

The administration has scrambled to find temporary housing for the children, who are pouring across the border in unprecedented numbers.

More than 90,000 children, mostly from Honduras, Guatemala and El Salvador, will be caught this year, and more than 140,000 will be apprehended in 2015, according to an internal U.S. Customs and Border Protection memo.

Plans to house some of the children at an empty office complex in Baltimore were halted after the city’s Democratic mayor and Maryland’s two Democratic senators objected as soon as the details were announced.

In Virginia, the administration signed a five-month lease with an option to renew for up to three years, all of it before officials caught wind of it, said Bernard L. Jones Sr., chairman of the Brunswick County Board of Supervisors.

He said HHS officials estimated that a steady stream of children would be housed on the campus, each child staying about 30 days until being reunited with a parent.

“The first major concern is the safety and security of the citizens of Lawrenceville and Brunswick County,” Mr. Jones said.

Jerry Prince, the owner of Prince’s Barber Shop in Lawrenceville, said that he wanted what was best for the children, but he feared the children would bring diseases to his town.

The fears may not be unfounded.

Immigration officials have said many of the children have never seen a doctor until they are intercepted by agents at the border, and head lice and scabies screenings are part of the initial checks.

Indeed, one early hiccup in the government’s efforts to find places to house the children was that the military, which offered housing on several bases, refused to let the children onto bases until seven days had elapsed from the time doctors had administered inoculations.

After seeing the local opposition to the Lawrenceville site, HHS officials hit pause.

“The project of developing Saint Paul’s College as a site for caring for minors in the Unaccompanied Alien Children program is on hold pending community input,” said Kenneth J. Wolfe, spokesman for HHS’s Administration for Children and Families.

HHS officials will attend a community meeting about the plan Thursday in Lawrenceville.

The Obama administration has called the surge of children a “humanitarian crisis” driven by a spike in gang violence in Central American countries that is prompting children to flee to the U.S.

However, critics blame President Obama for laying out a welcome mat for illegal immigrants, especially minors, and for discouraging deportations. Government interviews with the young border crossers confirm that many believed that once they arrived in the U.S., they’d get permission to stay.

Border Patrol agents have been taken off patrol duties to perform what they call “baby-sitting.” Agents say they are doing everything from changing diapers to trying to separate boys and girls getting frisky in detention centers.

On Monday, Rep. Candice S. Miller, Michigan Republican and chairwoman of a key border security subcommittee, wrote a letter asking Mr. Obama to deploy the National Guard to take up some of those duties and let the agents get back to their job of stopping illegal immigrants, drug smugglers and gun traffickers.

“This diversion away from normal patrol responsibilities will result in an increase of drugs and migrants illicitly crossing our border,” she said.

She called on the president to not only deploy the Guard but to give it police powers so it could also aid in patrolling the border and arresting illegal immigrants.