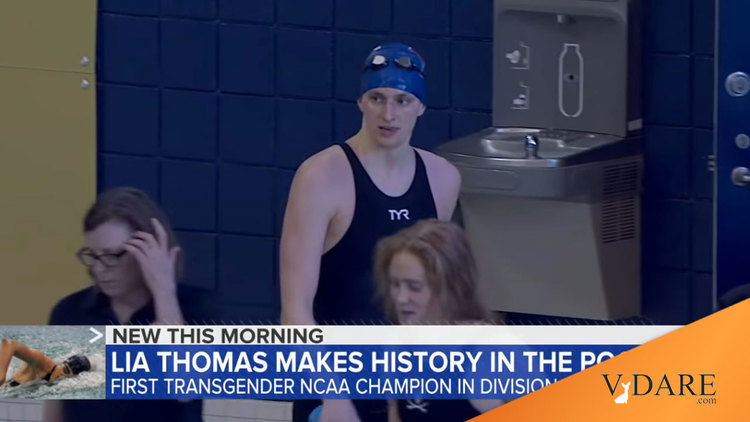 From the Washington Post sports section, some heavy duty philosophizing in defense of Will “Lia” Thomas’s reductio ad absurdum of the NCAA women’s swimming championship. It’s worth noting that while more and more people these days think not in terms of objective principles but make up their minds based on who they assume are the Good Guys and who are the Bad Guys, they think they think in terms of pure rationality. So, when challenged over backing an obvious absurd injustice, they extrude gibberish in defense of what they assume are their reasons.

Hate to tell you, but in a way, everyone is trans. As writer T Cooper observed, all of us in life’s competitive arena are on the way to becoming someone profoundly different than we were, and keeping score is just a way to track the arc of a person from youth to prime to past it. If you subtract the aim of becomingness from competition just because you’re afraid of a Lia Thomas and make it strictly about the chance to win a prize, then you might as well go to an amusement park and shoot a squirt gun at a clown face because it will have about as much meaning.

That’s quite a sentence.

The debate over whether Thomas, a transgender collegiate swimmer, has some sort of immutable biological edge over the field in this week’s NCAA women’s swimming championships will swamp whatever she does in the water. We look to facts to rescue us when a subject becomes heated, but here, the science remains unsettled.

No one arguing the issue really wants to admit it — when is the last time you heard a doctor or any other expert say the words, “I don’t know”? But we don’t know. Therefore, to exclude trans athletes from elite competition, out of our own constricting fears and uncertainty, is wrong, harmfully so.

Read all the position papers for yourself, the strenuous arguments over nanomoles of suppressed testosterone, from briefs in a Connecticut legal case over a high school sprinter to a “briefing” book submitted to Congress by the Women’s Sports Policy Working Group. And then do yourself a favor. Sweep them all off your desk and pick up a stunner of a book called “Real Man Adventures” by Cooper, a literature professor at Emory University whose credits include writing the NBC series “The Blacklist.” See if what you read in Cooper’s work doesn’t ring more startlingly true than any of the disputed positions.

“It turns out nobody else is born a man either,” he writes. “Sure, roughly half of us humans are born male — but only a fraction of that fraction grow into men.”

What is the real aim and value of NCAA competition? Is it not to grow people? Surely, it’s about more than just vaulting a small subset of young talents on to a podium for the sake of name-image-and-likeness deals and spots in the Olympics. It’s supposed to be about exploring who you are, whether on the pool deck or starting block or basketball floor, and the truth is that “every person has multitudes in them,” as Cooper’s wife, journalist Allison Glock, observed in her own work. That’s the real worthwhile inquiry of college sports.

Using this as a starting point in the Thomas debate seems a much smarter approach than the uncivil fearmongering over bone density and hand size. And it allows you to ask without insult: Is Thomas’s presence preventing other swimmers from finding out who they are?

Every age category from pre-puberty to professional has changing stakes and urgencies around this issue, and none of those categories are neat. But what can be said with some consensus and conviction is that contests for maturing competitors should be more than a matter of mere physical overwhelming.

The trouble is, whatever we think we know about this threat, there are complications to every assumption. Thomas’s Ivy League records this season at Penn coupled with her 6-foot-1 frame initially seem like an overwhelmingly unfair advantage — until you remember that Missy Franklin is 6-foot-2 and 165 pounds. For each researcher who presents certainty that the adolescent pulses of testosterone confer a “legacy” advantage in size and strength even after hormone therapy, there is the reasonable work of a Joanna Harper, a medical physicist who counters that it’s not that simple: There are disadvantages, too.

For instance, a larger skeleton is actually harder to aerobically push after the muscle loss of hormone therapy. And anyway, when has raw size or strength ever been the main determinant of victory in anything?

As Damon Runyon said, “The race is not always to the swift, nor the battle to the strong, but that’s the way to bet.”

… Then there is the baffling truth that height differences within genders are much greater than between them. …

For the moment we can only continue to calibrate judgments around the important question: Does our current collegiate model, with its inclusion of Thomas and other trans athletes, call forth competition that is interesting, meaningful and valuable? The answer is yes.

What competition is more interesting, meaningful and valuable than the question of whether Thomas will try in a race, and thus win as in the women’s 500, or throw the race, as in his other two women’s races in the NCAAs, to lessen criticism of him?