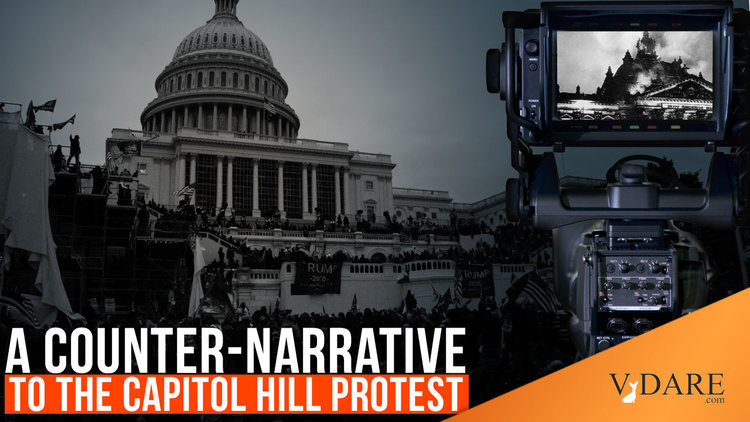 Earlier, by Peter Brimelow: CAPITOL "INSURRECTION" HOAX: How Our Lying Press Would Have Spun Jan 6 Protest If Trump Were A Democrat [VIDEO]

Hide and seek should be a game for children, not for ruthless feds. But here we are. An American citizen, innocent until proven guilty, is fighting for his freedom against a government juggernaut hell-bent on framing him as a violent Jan. 6 insurrectionist. One crucial key to clearing his name, his lawyer argues, lies in 30 seconds of a Capitol surveillance video that prosecutors don’t want the public to see. 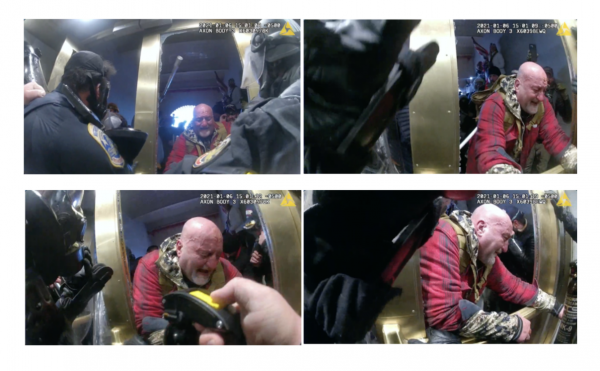 As Medvin first decried in oral argument in April, “This is not the Soviet Union, and the government does not get to control the narrative of what happens in the courtroom. The weedlike growth of the government’s power over public information is outrageous and un-American and cannot be permitted to continue unchecked.”

In a written motion filed last month seeking to free the 30-second video clip, Medvin asserted: “While John Anderson is charged with assaulting and impeding police officers, and theft of government property, amongst other accusations, the government’s evidence fails to corroborate the charges. The government’s evidence, instead, shows a man approaching police to seek medical attention after being chemically sprayed by a member of the crowd and after being subjected to additional chemical spray released into the crowd by law enforcement. The video sought for release, and being blocked by the government, establishes Mr. Anderson’s defense.”

Bizarrely, the Deep State opportunists milking Jan. 6 for all its political worth argue that it would be a danger to national security to allow Anderson, the media and the public to have access to the 30-second exculpatory clip at issue. In response to Medvin’s motion, the government cites the so-called mosaic theory to justify protecting video footage from the Capitol police force’s closed-circuit video system. Every individual piece of video evidence must be protected from disclosure, the prosecutors’ argument goes, to prevent nefarious operatives from piecing together in aggregate the exact locations of the entire vast network of cameras.

The problem, of course, is that the FBI, prosecutors, anti-Trump Democrat impeachment leaders and their water-carriers in the liberal corporate media have all selectively leaked, published and hyped several other key videos when it suits their narrative purposes. “The government has made Capitol CCTV video public when it bolsters or conveniences their case,” Medvin pointed out. “The government has already utilized CCTV video in their prosecution of Julian Khater and George Tanios, two January 6 Capitol incident defendants, and has made the CCTV footage available to the public.”

Moreover, the feds have utilized still images from CCTV footage multiple times in other public court filings. They released critical footage to Democrat House impeachment managers in a concerted attempt to punish former President Donald Trump. The FBI website blasted Jan. 6 video clips online from all over the Capitol complex in its drag net efforts to drum up public hysteria and hunt more suspects. And every major liberal press operation, from NBC to Buzzfeed to the Washington Post to CNN, has disseminated hundreds of videos that could be pieced together to construct a detailed “mosaic” of the U.S. Capitol security system. (A press coalition of those anti-Trump forces has even intervened in the Anderson case agreeing that the “highly sensitive” designation of the 30-second clip should be removed and that the government has offered no credible justification for suppressing it.)

“Surely,” Medvin pleads, “Mr. Anderson should not be prejudiced by the continued veil of secrecy over the video sought for release in his case simply because in this case the government does not feel the release is advantageous to their legal position. The government’s contradictory position in John Anderson’s case to their utilization of CCTV video in the cases of Julian Khater and George Tanios gives the government control over the defense and creates a disparity between the parties standing before this court, rendering the defense an inferior party to the prosecution; all the while, the two parties are to stand before the court as equals … In Mr. Anderson’s case, the government is attempting to conceal video favorable to the defense to protect their unjust prosecution and to continue to unilaterally control the public narrative. Why should this be permitted?”

Why indeed? It’s increasingly difficult to celebrate America’s independence and its purported freedoms when such brazen injustices are committed with impunity in the nation’s capital. Land of the free? LOL. How about: Free the Jan. 6 tapes. Not just Anderson’s 30 seconds, but all 14,000-plus hours of them.