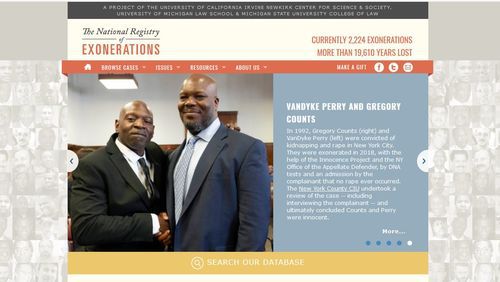 They fudge little things, like their height or weight. They exaggerate their athletic prowess or professional accomplishments. They deceive family, friends, lovers, voters, government officials, business partners and themselves. They lie about murder, theft, kidnapping, rape and discrimination. They lie for attention, deflection, power and profit.

Often, the reasons for manufacturing devastating fables are indiscernible or unfathomable. But this much is clear: If there are no consequences for lying about crime, false accusations will continue to ruin the lives of innocents—poor and rich, black and white, liberal and conservative, civilian and cop.

According to the University of Michigan Law School's National Registry of Exonerations, 2,224 innocent criminal defendants since 1989 have been cleared of all charges in their cases. The average prison term served by exonerees is 14 years. In total, wrongful convictions have cost exonerees 19,610 years of freedom since 1982.

Wrongful convictions are based on a rotten foundation of lies and untruths constructed by a village of false accusers, including jailhouse snitches, biased investigators, corrupt crime lab analysts, faulty eyewitnesses, and ruthless prosecutors acting in bad faith.

John Bunn, wrongfully convicted of assault and murder when he was just 14 years old, is just one of more than a dozen innocent citizens who became entangled in New York Police Department Det. Louis Scarcella's nefarious web of deception. The infamous cop falsified evidence, suppressed evidence and coerced false confessions to ensure convictions and bolster his career as part of what one judge called a "pattern and practice" of misconduct demonstrating "disregard for rules, law, and the truth." Bunn and co-defendant Rosean Hargrave, became the 12th and 13th exonerees who had been targeted by Scarcella, just this month.

Daryl Fulton and Nevest Coleman each served nearly a quarter-century behind bars for a 1997 rape and murder of a woman in Chicago they did not commit. They endured physical abuse by detectives with a long history of coercing false confessions. Fulton and Coleman were released last November and granted certificates of actual innocence two months ago after post-conviction DNA testing and reinvestigation by the Cook County Conviction Integrity Unit cleared them—and instead implicated a repeat sexual offender who lived near the victim.

Famed private attorney Kathleen Zellner, the most successful exoneration specialist in the nation, recently filed a civil rights lawsuit on Fulton's behalf. She has won landmark settlements on behalf of exonerees Ryan Ferguson, wrongfully convicted of murder in Missouri, and former Washington state police officer Ray Spencer, wrongfully convicted of sexually molesting his own children—the result of lies told by a vengeful ex-wife who was having an affair with a conniving police detective overseeing the investigation.

Despite a complete lack of physical evidence, forensic evidence or corroborating witnesses, New Yorkers VanDyke Perry and Gregory Counts served 11 years and 26 years respectively for an alleged gang rape in 1992. Their convictions, vacated just this month, were based solely on the account of a woman who recanted years later and blamed a boyfriend for pressuring her into making it all up. The liar will face no charges because the statute of limitations has expired.

Question: If accusers can level rape and other claims decades after a purported crime occurs, why shouldn't the statute of limitations on prosecuting lies about crimes and seeking civil redress against all enablers be extended proportionally, too?

Incontrovertible reality: These travesties happen in Democratic-controlled big cities and the rural South alike; by bad cops and to good cops; at the hands of white and black prosecutors, judges and ill-trained experts and investigators of all stripes.

What's shocking is not that these injustices are routine, but that public amnesia sets in every time accusers level sensational allegations of crimes in the court of public opinion before all the facts are known. Witness the knee-jerk social media conviction of innocent white Texas state trooper Daniel Hubbard by anti-cop advocate and former New York Daily News columnist Shaun King, who spread uncritically the false claims of a black woman who lied about Hubbard raping her during a traffic stop.

The admitted liar, Sherita Dixon-Cole, will not be prosecuted based on a technicality. Incredibly, King is reportedly moving on to a job with the Harvard-affiliated Fair Punishment Project, which in part conducts research to prevent more wrongful convictions.

Reform begins with confronting, instead of denying, reality. The cure for ignorance is exposure. Bias of all kinds destroys lives. People lie about everything under the sun. Women do lie about rape. Judges, prosecutors and police are not infallible. The system does fail.