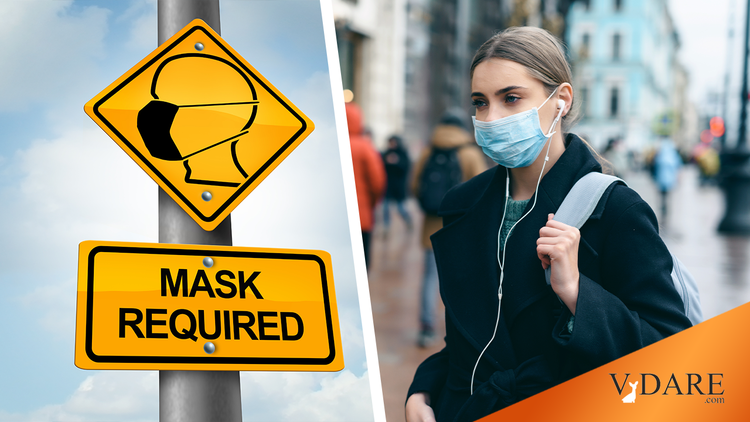 Earlier, by Michelle Malkin: Mask Mandates Are a Public Health Menace and The Grand Farce of American Social Distancing

Good news: The anti-mask mandate movement is gaining steam. Americans yearning to breathe free are waking up from their pandemic stupor. Common sense and constitutional principles, now more than ever, are vital to a sovereign nation's health.

Moreover, Stickman ruled [PDF], Pennsylvania's stay-at-home order—a sweeping population unlike any "in the history of our Commonwealth and our Country"—violated the 14th Amendment's due process rights to travel, association and privacy. Similarly, Wolf's extreme and open-ended power grab designating and closing "nonessential" businesses undermined due process protections "against arbitrary government action."

While Wolf's measures may have been "well-intentioned," Stickman concluded that "good intentions toward a laudable end are not alone enough to uphold governmental action against a constitutional challenge. Indeed, the greatest threats to our system of constitutional liberties may arise when the ends are laudable, and the intent is good—especially in a time of emergency."

In Florida, conservative lawyer and state House Rep. Anthony Sabatini cheered the defeat of Wolf's draconian COVID-19 orders. "Some in the Judiciary are finally waking up to the fact that the government is not always right—and that the constitution is not suspended during an emergency," he told me. Sabatini has filed 15 ongoing challenges to the Sunshine State's lockdown measures. "We're looking forward to winning."

As in Pennsylvania, our state Supreme Court declined to hear the case. So we filed in Denver District Court two weeks ago. Polis and other government officials are on notice: no more kings.

Like Americans all across the country, Coloradans have been threatened with civil and criminal penalties for failure to wear a mask in public, and businesses are coerced by the governor into enforcing his mask order with zero input from voters or their elected representatives. Last week, Polis unilaterally extended the mask mandate by another 30 days. Our lawyer, Randy Corporon, laid down the law:

"The Colorado Constitution expressly prohibits the delegation by the legislature of lawmaking authority to the governor. While courts have made limited exceptions for emergency situations, we are now six months into this 'emergency' with a governor who, on his own, extends his superpowers every 30 days. Enough is enough."

Corporon's law firm has filed a companion lawsuit seeking an injunction against "Power Grab" Polis on behalf of the family owners of the Bandimere Speedway—where more than 5,500 patriots joined us at a rally to "Stop the COVID Chaos" two weeks ago. Liberals and "Never-Trumpers" have condemned our constitutionally protected peaceful protest, while downplaying violent BLM and antifa riots that have turned downtown Denver into a Third World hellhole.

We are not alone. Parents in Tennessee are suing to free their children from unlawful and unhealthy mask mandates unsupported by science. Minnesotans have filed multiple lawsuits against Gov. Tim Walz. "It's not the place of government to impose those requirements on us when there is no lawful authority to do so," Doug Seaton, Upper Midwest Law Center President and attorney, argues. "That's something that is against our self-governing principles that we've had in the state of Minnesota since we were a part of the Northwest Territory. We can't have our governor override the separation of powers and the limited government we have and trample on rights, whatever good the intentions might be."

In Boise, Idaho, this weekend, citizens held an anti-mask rally at the local Veterans Memorial park. Organizer Jeff Buck spoke for all of us: "We feel like we are being held hostage and we need to stand up for our rights or the government will take them away."

Masks off. Fight on. This is the American way.