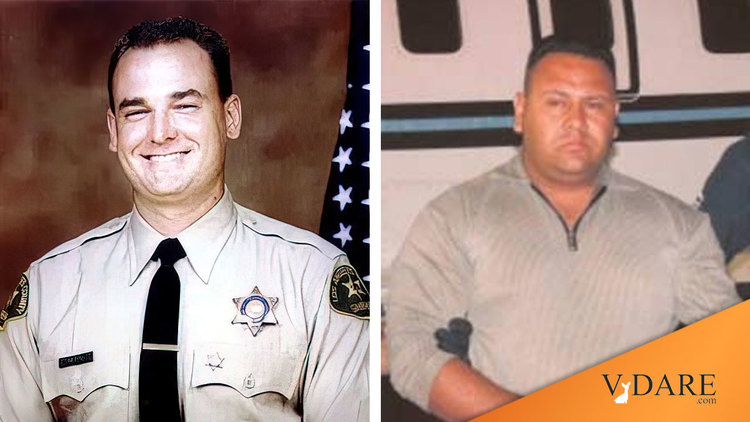 Two decades ago this spring, I was furiously pounding out the manuscript to "Invasion," my very first book on the systemic failures of immigration enforcement in America. On April 29, 2002, as if to underscore the bloody consequences of open borders that I had been compiling, a violent illegal alien repeat criminal offender named Jorge Arroyo (aka Armando) Garcia assassinated Los Angeles County Sheriff's Deputy David March during a routine traffic stop in Irwindale, California.

Garcia had been thrice-deported back to Mexico, twice-convicted for felony drug dealing and weapons violations, and was under investigation in two separate attempted murder cases when Deputy March pulled him over for a broken front light while on morning patrol. Despite federal law requiring criminal prosecution for illegal reentry into our country, serial invader Garcia never faced any action by the then-Immigration and Naturalization Service or the U.S. Attorney's office in Los Angeles to kick him out and keep him out. The career lawbreaker was working illegally as a cook at a Mexican restaurant on Deputy March's last day on earth.

According to the L.A. County Sheriff's office, what happened next was a deliberate, cold-blooded assassination.

Garcia "had stated to friends that he wanted to kill a police officer during a traffic stop," the department discovered. "The suspect intentionally got stopped and waited for Deputy March to get in front of his patrol car so he could open fire, as Deputy March would have no place to take cover. Deputy March was shot several times in the head and chest." One of his colleagues who rushed to the scene, Deputy Tiffany Burgoyne, recounted holding the beloved leader's head in the ambulance on the "longest ride in her life"—and arriving at the hospital "covered in blood."

Despite heroic attempts to save his life, Deputy March died and left behind devoted wife Teri, stepdaughter Kayla; and his tight-knit parents and siblings, dad John, mom Barbara, sister Erin, and brother John. Deputy March worked as a security guard, joined the Marine Corps and then entered the Sheriff's Academy in 1996. He had served with distinction for seven years before giving his life at the age of 33 years young. At his packed memorial, a colleague read from a recent self-evaluation that Deputy March had penned, summing up his personal credo that was adopted as his department's official credo after his murder:

“My goals are simple. I will always be painfully honest, work as hard as I can, learn as much as I can and hopefully make a difference in people's lives.”

While a massive outpouring of support from law enforcement officers and an unforgettable hero's funeral helped ease the family's grief, their nightmare had just begun. It would be another four years before Deputy March's killer was brought to justice after he immediately fled to Mexico and enjoyed pro-criminal extradition protections from his native country. "[I]t's a slap in the face to me, it's a slap in the face to what my husband stood for, and it's a slap in the face to law enforcement," Teri March testified before Congress in 2003. Her advocacy shed light on hundreds of similar illegal alien fugitive murder suspects harbored by Mexico to avoid life imprisonment.

When Garcia was finally taken into custody and turned over to the U.S. in January 2007, he was shackled with Deputy March's handcuffs. He pleaded guilty to intentional killing of a police officer and will be locked up the rest of his life without parole.

When I saw his sister Erin March in Idaho last month, she donned a shirt honoring her brother emblazoned with his face, badge and creed. The March family, she told me, is "upset" by what the Biden administration "is allowing at our southern border." Mom Barbara declared that "it's a crying shame that 20 years ago people didn't understand the seriousness of this issue and now things are out of control."

"People don't tend to act until an issue has some direct effect on their own personal lives," Erin observed. "It's just human nature. Now we have a literal flood of people entering this country illegally needing all kinds of assistance, and taxpayers are expected to carry the burden. Even worse, in the years since my brother's death, the number of victims of illegal immigrant crime has grown exponentially. Now Americans are receiving their gut punch, but the damage has been done."

Thanks to bipartisan America Last sellouts and globalist profiteers, the border remains a deadly sieve. But Deputy David March is not forgotten. Every year, for the past 20, the L.A. County Sheriff's Department has held an anniversary vigil at his memorial site. A hometown park was named in his honor. In a world endangered by cowardice, compromise and incompetence, Deputy March has inspired countless citizens to uphold tradition, honor, integrity and truth-telling. His creed—memorialized in "Invasion"—is still mine, too:

“My goals are simple. I will always be painfully honest, work as hard as I can, learn as much as I can and hopefully make a difference in people's lives.”