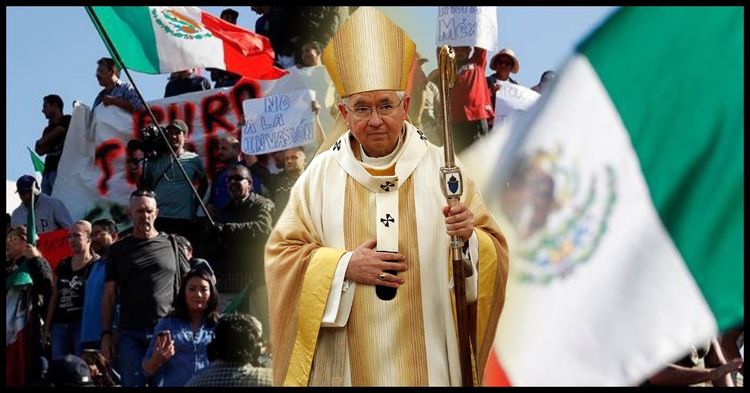 Earlier by Eugene Gant: A Catholic Layman Wanted His Bishops To Talk About The Lavender Mob—But They Wanted To Talk About “Racism”!

As a Catholic and an American, I took a deep interest in the recent election of Mexican immigrant José Gomez to be president the United States Conference of Catholic Bishops. I was even more interested to learn that chief concern of his will be, wouldn’t you know it, immigration. Forget pervert priests, the mass murder of children in the womb etc. The real crisis facing the American Church is DREAMers and their evil nemesis President Trump!

Gomez is the 67-year-old archbishop of Los Angeles, the largest Catholic diocese in the country. He pulled 176 of the 238 votes cast [Archbishop Gomez elected next president of the US bishops, by Pablo Kay, Angelus, November 12, 2019 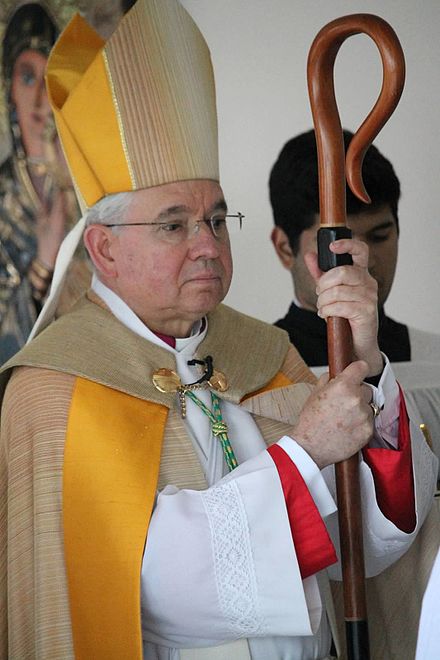 Gomez, right, who appears to be yet another Conquistador-American,  was apparently transferred to the U.S in 1987 and became a citizen in 1995. Like all bishops, he is a highly-educated, intelligent man with degrees in accounting, theology, and philosophy. He’s probably a nice fellow, too.

But all that erudition and niceness regardless, he wrongly thinks his job, backed by the USCCB, is changing immigration policy.

“A pathway to legal immigration is a top priority” for Gomez, The New York Times’s Elizabeth Dias reported [U.S. Catholic Bishops Elect Hispanic Immigrant as Leader, November 12, 2019]. She quotes Gomez, “[t]he families that are coming are coming here because the situation in their countries is just horrible They are really wonderful people, they have good families, they work really hard, and it is just beautiful to see their lives. It seems that the elected officials do not understand that.”

We need to be clear: The fate of these young adults should never have been in the courts in the first place. And it would not be, if our leaders in Washington would simply set aside their political interests and come together to fix our nation’s broken immigration system.

In fact, their fate wouldn’t be in the courts at all if the radical Left wasn’t waging unremitting lawfare against the Trump Administration over every jot and tittle of its attempt to control the border. But that truth somehow escaped Gomez’s attention:

Washington’s failures cut across party lines and date back to 1986, the last time Congress made comprehensive reforms to immigration policy. …

Either party on its own, or both parties together, could have solved this issue, if there was political will and the courage to do so.

What is important now is for this president and this Congress to do something about DACA. ...

America is their home, the only country they have ever known. They are “Americans” in every respect except their legal status.

That last is wishful thinking, the 1986 “comprehensive reforms” were supposed to be a one-time Amnesty, and Trump did do something about DACA. He ended it.

Funny thing is, Gomez isn’t likely to publicize a brand new report from U.S. Citizenship and Immigration Services that shows a whole lot of those DACA DREAMers aren’t such “wonderful people.” Of 765,166 approved applicants, 79,398, about 10 percent had been arrested for such crimes as rape, riot, burglary, robbery, and murder.

Gomez has also written a book titled Immigration and the Next America—which suggests the current America doesn’t meet his expectations.

Well it doesn’t meet mine, either. I prefer the “old America” in which I grew up, including the pre-Vatican II Church that had “priorities” beyond “welcoming the stranger,” the USCCB’s disingenuous rendition of Catholic teaching that VDARE.com has  written about before.

“Political authorities, for the sake of the common good for which they are responsible,” the Catechism says, “may make the exercise of the right to immigrate subject to various juridical conditions, especially with regard to the immigrants' duties toward their country of adoption.”[ Catechism Of The Catholic Church, 2241]

Likewise, even the USCCB says “Catholic social teaching is realistic,” and “no country has the duty to receive so many immigrants that its social and economic life are jeopardized.”

It just doesn’t mean it.

As VDARE.com noted in 2016, immigration policy is a matter of prudential judgement about which Catholics can disagree in good faith.

The difference between Gomez and Catholic immigration patriots is this: We believe the horde of illiterate, diseased, penniless “migrants” colonizing the United States—977,509 apprehended in fiscal 2019—do “jeopardize this nation’s social and economic life.”

Aside from that, we old-fashioned Catholics think Gomez’s “priority” should be abortion, homosexuals in the collar, and the collapse of belief among the faithful.

Beyond wrecking the country, mass immigration undermines support in Congress and the White House for Church teaching.

As the Times’s Rias noted, 40 percent of American Catholics are now Hispanic, and they vote overwhelmingly for the party of abortion. Their vote for Democrats in the 2018 midterms was 69 percent [Key takeaways about Latino voters in the 2018 midterm elections, by Jens Manuel Krogstad, Antonio Flores and Mark Hugo Lopez, Pew Research Center November 9, 2018]. The Hispanic vote for Hillary Clinton in 2016 was 66 percent, Pew reported, and for Barack Hussein Obama, 71 percent in 2012 and 67 percent in 2008 [Hillary Clinton won Latino vote but fell below 2012 support for Obama, by Jens Manuel Krogstad and Mark Hugo Lopez, November 29, 2016].

In other words, Latin Americans are not “natural conservatives,” as GOP immigration enthusiasts tell us, and importing more of them means cementing Democrat power, which in turn means more abortion and other evils that trespass black-letter Catholic teaching, such as those on human sexuality [The Sixth Commandment, Catechism of the Catholic Church]. It also means pushing the country toward outright socialism, which, as a matter of fact, was condemned by Pope Leo XIII in 1891 [Rerum Novarum].

Gomez’s “top priority,” in other words, would empower pro-abortion fanatics like Kamala Harris.

Immigration aside, one would think the homosexual rape and abuse scandal that has wrecked the reputation of the priesthood and is bankrupting the Church might refocus his thinking.

Here are a few news items on that front that Gomez and USCCB might prioritize:

After addressing all that, Gomez might try teaching the faithful and rebuilding the priesthood:

Pope Francis topped all this off when he authorized the worship of the Amazonian pagan idol Pachamama at the Vatican in October, then displayed the thing at Santa Maria in Traspontina. After a brave Austrian Catholic tossed the demon into the Tiber, Francis apologized [Austrian Catholic: Why I Threw Pachamama Statues into the Tiber, by Edward Pentin, National Catholic Register, November 4, 2019].

Yet with all that, and the 1,500 prominent faithful Catholics who have called Pope Francis a heretic [Open letter to the bishops of the Catholic Church, Easter Week, 2019], the priority for Gomez is importing more Democrat voters.

Strikingly, the only Catholic prelate really speaking sense on “migration,” MSM code for Third-World colonization, is Cardinal Robert Sarah, born in West Africa in the then-French colony of Guinea who rightly says his fellow Church leaders are retailing Leftist ideology, not Catholic teaching [Sarah says defending migrants is a ‘false exegesis’ of the Gospels, by Thomas Hennegahn, The Tablet, April 1, 2019].

But Sarah can’t be heard because the MSM Megaphone amplifies only the Open-Borders message of Gomez, Francis and the Treason Lobby inside the Catholic episcopacy.

Last year’s USCCB meeting was embarrassing enough. As the homosexual rape and seduction scandal reached the highest level of the American Church in the person of disgraced Cardinal “Uncle Ted” McCarrick, the bishops bravely denounced “racism.”

Now, as the pope invites demons into the Vatican, the top American bishop says the United States must provide for every Tomas, Dick, and Haroldito who crosses the border.

The Church is a mess. Shut up and clean it up.