There were the usual racial politics. Australian TV commentator Jacqui Cooper got called a racist for saying of Chinese Olympians that “They all look the same, they're very hard to tell who's who.” She hastened to claim she was talking about their jumping technique.” [Daily Mail,  February 15, 2018]

February Whew – that was a close one. 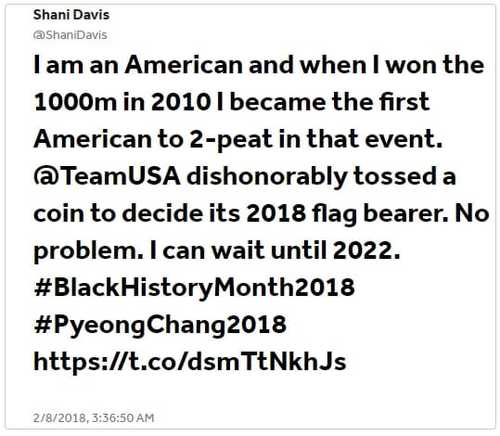 Rare black skater Shani Davis lost the coin toss to be the American team’s flag bearer at the Opening Ceremony. The coin toss result obviously being a result of racism, Davis had no choice but to boycott the ceremony. [Black US Olympic Athlete Plays Race Card – Skips Opening Ceremonies After He Is Not Chosen to Carry US Flag by Jim Hoft Gateway Pundit, February 9, 2018]

Indeed, the whole Winter Olympics is racist, according to Mary Pilon at The Outline: Winter sports are for rich white people [February 7, 2018].

And in a small way, there was the usual gringo-bashing from the Hispanosphere. Puerto Rico, a U.S. territory which (paradoxically, as I have pointed out) has its own Olympic team, was composed of a whopping total of one skier, a certain Charles Flaherty.  He was born on the U.S. mainland, moved to Puerto Rico at nine, and now divides his time between the two.

Mexico, sent four skiers to the Olympics. But how Mexican were they?

In the past, Franco has competed for competed in skiing competition for the U.S., but this time he competed for Mexico. Said Franco, “It is a huge honor to be pioneering this sport in Mexico…I thought everyone would be saying, ‘He lives in the U.S.’ But no, it was like, ‘You’re one of us, you’re family.’” [Mexico Olympics team small but distinctive, Mexico News Daily, February 13, 2018] <start="3"> Regarding her change from competing for the U.S. to competing for Mexico, Schleper said that "Many people think it's wrong to switch countries to compete, but for me it's very natural to keep competing and for Mexico, which is my favorite country in the world; I love being Mexican.”[ 'Tres' company for the Mexico ski team in the Winter Olympics, by  Adriana Terrazas, ESPN Mexico, October 31, 2017] 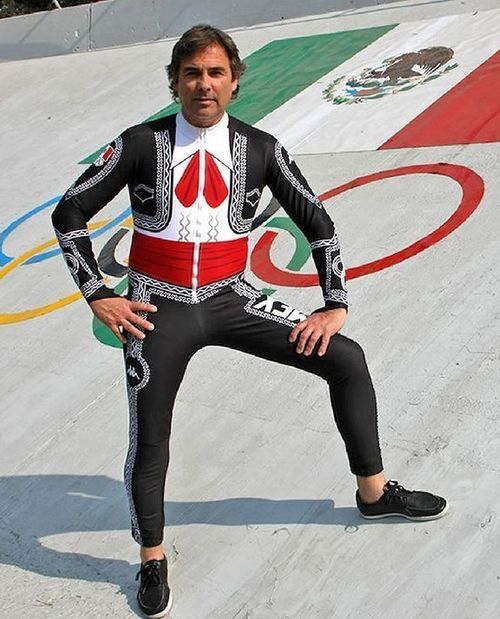 So only one skier on the Mexican team currently resides in Mexico. Two are dual U.S.-Mexican dual citizens, another is a dual Mexican-Canadian citizen who doesn’t speak Spanish.

Another important presence at these Olympics made his mark on the Mexican team: the one and only Hubertus Rudolph zu Hohenlohe-Langenburg, European aristocrat, dual citizen of Liechtenstein and Mexico, founder of the Mexican Ski Federation.

This flamboyant aristocrat has competed for Mexico in six Winter Olympics, in four of them was a one-man team. Von Hohenlohe has never won an Olympic medal, but then his motto was “If you cannot win, then at least be stylish.”  Pictured right: Von Hohenlohe his self-designed Mariachi-themed 2014 Olympics  ski uniform.)

Von Hohenlohe tried out for the Mexican team this year and didn’t make it, but he still contributed by designing the Day of the Dead skiing costumes used by some of the team (see here, or above) and was at the Olympics to cheer them on.

Just so you know that Von Hohenlohe is not some dilettante aristocrat, note that he is a serious social critic, having released a protest song against President Donald Trump. He says:

I am having a go at the idea that Trump is trying to build a wall and put a boundary between Mexico and the United States.

That’s funny. I thought there already was a boundary between the U.S. and Mexico. But then again, it hasn’t been guarded well, so maybe Von Hohenlohe is making an honest mistake.

Then the scion of the House of Hohenlohe-Langenburg gets downright philosophical.

"We go to the Olympics and (it's) all peace and cheesy and 'how much we love each other.' And (yet) there is this very barbarian thing of putting up a wall. So, I made a song and it is coming out on exactly the day that we walk into the (opening ceremony) of the Olympic Games."

It’s entitled “Austin” and has a catchy tune but it seems more like a tourist promotion video than a protest song, portraying scenes of Austin, Texas, with Von Hohenlohe driving around in a Silverado with a cowboy hat on.

He sings “Let me take you to the town where Mr. Trump wants to build his wall”—although Austin is 236 miles away from International Bridge #2 at Laredo.

But the biggest Trump-basher on Team Mexico: American-born and raised Colorado native, Sarah Schleper—the only one on the team residing in Mexico. 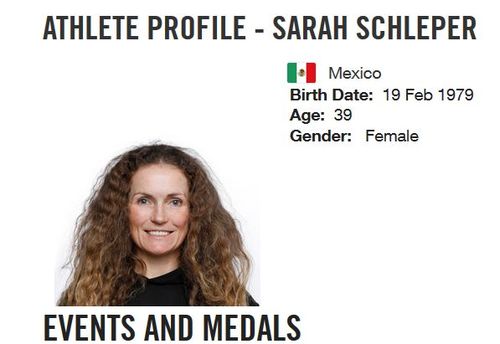 A cynic might say that Sarah Schleper, who is approaching 40, is a  past-her-prime skier and on the Mexican team because it’s much easier to qualify for than the US team. But let’s not say that. Let’s give her the benefit of the doubt. After all, she has married a Mexican man and has a family with him.

But why the Trump-bashing? She says

I know that Mexico has been affected by Donald Trump and with the idea of building his wall. But for me it [competing in the Olympics] it is a way of uniting the Mexicans who live in the United States also.  [Sarah Schleper, derribando muros “Sarah Schleper: Overthrowing Walls, by Saul Trujano, Excelsior, January 31, 2018

I compete for the Mexicans who are in the United States and for those who live here [Mexico]. I compete for all Mexicans.

In other words, Schleper has bought the official Mexican line that Mexicans in America owe allegiance to them.

The skiers of the Mexican Winter Olympics team actually appear pretty American/ Canadian. But they still demonstrate the ominous power of Mexican nationalism. A certain amount could be opportunism. But my impression is that their strong identification with Mexico is real.

Now multiply the Mexican skiers with millions of Mexicans in the United States.

How many of them feel more Mexican than American?

What’s that mean for the long-term viability of our American nation-state?

Have we really thought this thing through?