Here is my homework assignment for all the fist-clenching, gun control-demanding teenagers walking out of classrooms this week (and next week and next month) to protest school shootings:

Chances are, the adults closest to you—those most directly responsible for your security—have been shirking their primary duties, squandering scarce resources and deflecting blame.

Yes, it's glamorous and exciting to appear on "The Ellen Show," rub elbows with Eminem at the iHeartRadio Music Awards, pal around with Anderson Cooper, and soak up praise and donations from George Clooney and Oprah for shouting at the NRA, Republicans and President Trump.

Sure, it's fun to ditch your homework, parade around in "March For Our Lives" swag, and watch your Twitter mentions explode like SpaceX launches every time you indignantly accuse gun-owning moms of hating their own children.

It's lit like Bic to be the Democrats' new junior lobbyists, fundraisers and voter registration captains.

But when the media whirlwind dies down and the Everytown buses ship you back home, mundane realities will set in.

Negligence, incompetence and inattention to the core mission of education and ensuring students' safety don't just spring out of nowhere. They are not alien invaders descending upon your neighborhoods from thousands of miles of away to impose chaos and misery upon your erstwhile Edenic existence.

Take Broward County, Florida. The current superintendent, Robert Runcie, [Email him] was hired to clean up encrusted corruption in the district and school board that dates back to the early 1990s and resulted in three statewide grand jury investigations in 1997, 2002 and 2011. That last report blasted "malefeasance, misfeasance, and nonfeasance" on the Democrat-dominated school board and within top management at the district. In fact, the grand jury concluded after probing waste, fraud and favor-trading in capital construction projects:

"The culture of misfeasance and malfeasance at the school district is so deeply ingrained, so longstanding and so severe that we believe (employees who blow the whistle) will either be subsumed into the existing culture or drummed out of the District as soon as current attention is diverted from the Board and District."

Indeed, one former building inspector who was fired in retaliation for warning about building code violations received a $45,000 settlement from the crooked school board. One board member was convicted on extortion, wire fraud and bribery charges involving school construction. Under Runcie, an $800 million renovation bond passed by voters in 2014 for school repairs on moldy, decaying buildings has been abjectly squandered; critics have alleged more bid-rigging, lax oversight and circumvention of graft reforms passed seven years ago.

The grand jury had issued a prophetic warning: "Bad habits and corrupt practices often return when the light of inquiry is turned off."

Five years later, the district was entangled in yet another fiscal scandal after the state auditor general determined the schools had misallocated $23 million in federal Title 1 funds for low-income students; had "failed to correct safety violations at some schools;" and "paid health insurance premiums for former employees who were ineligible and in some cases dead," according to the Fort Lauderdale Sun-Sentinel.

When public scrutiny is diverted to red herrings and politically expedient scapegoats, feckless educrats are all too happy to participate in accountability Kabuki theater. After the Parkland, Florida, shooting last month, Runcie immediately pounced: "If we really want to do something, spend money on adding more school resource officers and law enforcement." 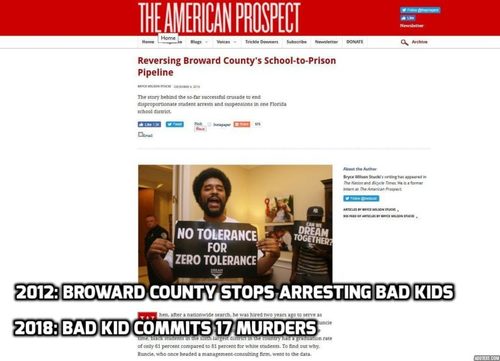 What bunk. Continued profligacy is no violence prevention strategy. If school leaders can't exhibit basic fiscal discipline and stewardship, how can they be trusted to ensure classroom discipline and physical safety?

Is it any surprise that Runcie's social justice pandering to dismantle the "school to jailhouse pipeline" won him Obama administration accolades—while endangering the lives of children used as political pawns?

The same set of corruptocrats who were in place while cronies rigged bids for personal gain stood by while book-cookers rigged crime statistics to appease racial bean counters.

There were no district-wide walkouts and nationwide protests when Broward County parents of special-needs students were laughed at during a school board meeting as they exposed how their children had been bullied, beaten and bitten by tormentors without consequences in 2016. Nor was there a massive uproar last fall when the district acknowledged a whopping 480 incidents of alleged sexual harassment and abuse in its schools.

As a famous Chicago community organizer once quipped, "Change is hard." Selfies with gun control armbands is easy. Cleaning your own house, district and county is hard. Junkets to D.C. are easy. Digging through audits and public records is hard. Regurgitating Mad Libs-like talking points against the NRA and Second Amendment is easy.

Go back to class and look homeward, all you young "change agents." The faultiest faults are near, not far.

Michelle Malkin's new episode on the Holtzclaw case debuts this week at crtv.com/michelle-malkin-investigates.